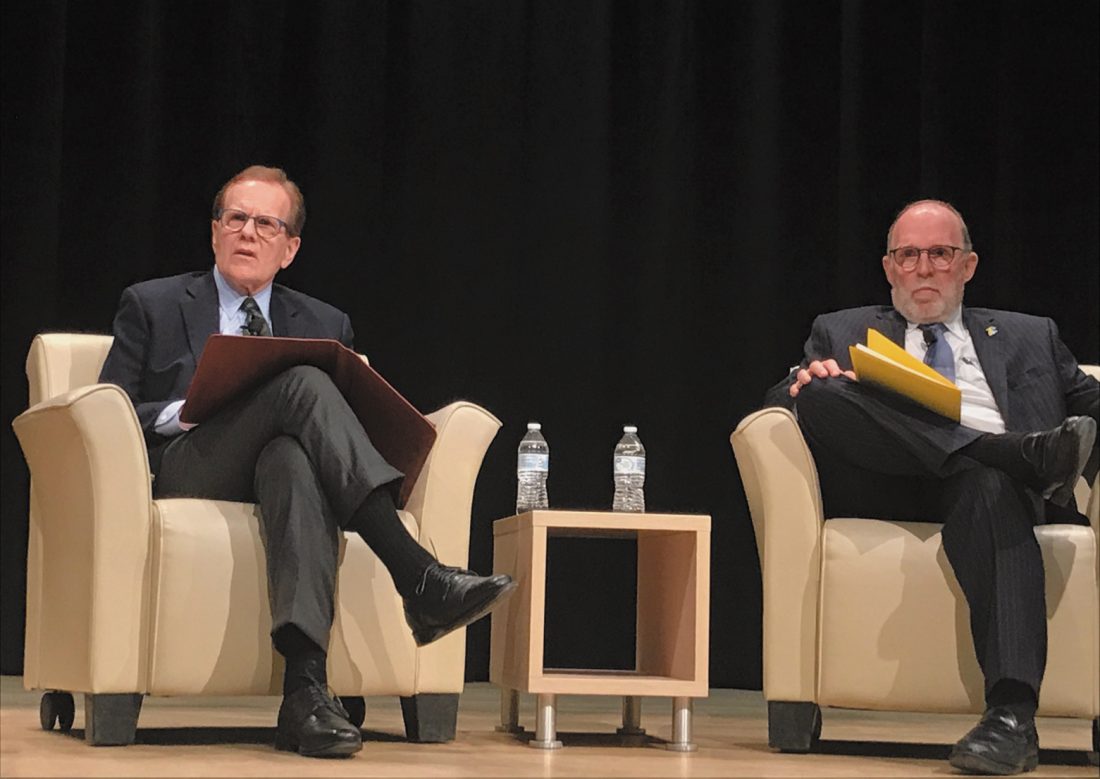 Steve Mitchell, left, chairman of the Northern Michigan University Board of Trustees, and President Fritz Erickson address the crowd at a Wednesday forum detailing investment initiatives at NMU. The forum took place at Jamrich Hall. (Journal photo by Christie Bleck)

MARQUETTE — Initiatives at Northern Michigan University have the goal of retaining students, and those initiatives were detailed at a Wednesday forum at Jamrich Hall.

NMU Board of Trustees Chairman Steve Mitchell hosted the forum regarding initiatives that represent an investment of about $4.1 million to stave off the consequences of an expected enrollment decline, which is being seen in the Upper Midwest and across the United States.

One prediction estimates an enrollment decline of 15% by 2029, he said.

“This type of a drop in our enrollment would necessitate, we believe, a cut of about $9 million in our annual budget, and believe me, that would lead to some pretty serious layoffs,” Mitchell said, “and the last thing we want to do is to be laying off people.”

“Our students come here,” Mitchell said. “They incur debt. Their parents incur debt. They spend a lot of money for education. We’ve got to do the best job we can to keep them here, to get them a degree and to make sure that when they go out in the world, that they have an education that will allow them to make twice as much as money as if they didn’t have a college education.”

The bottom for the initiatives, he said, is simple.

Based on a 3% increase in enrollment, NMU would lose money in the first two years, but by the fifth year, the university would make about $1.2 million with previous losses be paid off, resulting in a positive cumulative impact of $642,200.

At a 5% retention rate, which Mitchell believes NMU would achieve, the fifth year would show a net revenue of about $2.1 million and a positive cumulative impact of about $3.5 million.

“All of these initiatives are designed to keep us in the same place we are today,” Erickson said. “What we are looking to do is to do those things to combat the demographic challenge, and while this does sound a little bit odd, our real goal over the next five years is to maintain the gains that we have had, and the only way to do that is through investments.”

To be proactive, the NMU Board of Trustees in December approved a number of initiatives, which were discussed at Wednesday’s forum:

≤ In the predictive analytics implementation plan, the goal of the partnership between NMU and HelioCampus is to create risk scores before a student starts college and as a student experiences it. Advisers will leverage these scores in relationship-building and intervention, with analytics allowing NMU to establish “academic fit” models that predict a student’s likelihood of success in a chosen program.

≤ NMU, with the Centralized Advising Expansion Implementation Plan, will embed 15 advising and support specialists in academic departments over the next three years. The goal is to increase persistence, retention and graduation rates. Practices will include personal assistance and mentoring, career exploration activities, academic skill development and course-scheduling activities.

≤ The Pick One Implementation Plan involves an initiative whose goal is to increase student engagement by creating a culture and expectation of involvement.

≤ Through the Information Technology Implementation Plan, IT will be involved in predictive analytics, embedded support specialists and Pick One initiatives to support implementing technology-related aspects of these projects.

≤ As part of the Career Services Expansion Implementation Plan, additional staff will increase opportunities to work with students on things such as interviewing and resume skills.

≤ With the Graduate Enrollment Implementation Plan, a senior administrative position in Graduate Education and Research will lead student recruitment and admission strategies to attract, recruit and enroll well-qualified graduate students for various programs. The Finlandia Early Assurance Program will provide a pathway for Finlandia University students to apply for acceptance in the master of social work program.

≤ The Aim North Implementation Plan’s mission is to foster student belonging through community-university partnerships that provide students with a head start on college graduation and build a strong support system within the students’ community. Efforts that increase the likelihood of success in college include enrolling students in two general educational courses in the summer immediately after high school graduation.

≤ In the Rural Health Center Implementation Plan, the purpose and goals of the Northern Michigan Center for Rural Health include integrating a health care network that better serves the needs of the Upper Peninsula. This would involve coordinating the efforts of rural health care providers in the region, sharing resources and providing continuing education offerings on a broader scale using the Educational Access Network.

≤ The mission of the SISU Innovation Institute/Program Investment Funds Implementation Plan is to develop ideas beyond preconceived limitations through the Finnish spirit of sisu.

≤ Offering a comprehensive cyber curriculum on a national level and meeting long-term forecasts the demand for cybersecurity talent is the goal of the Cyber Defense Academic Enhancement Implementation Plan. Enhancements will center on securing Center of Academic Excellence designation, which ensures that NMU’s program curriculum offers a complete and quality educational experience as defined by government and industry.

≤ The Varsity Esports Team Implementation Plan involves NMU’s development of a coed varsity esports program that will compete as a member of the National Association of Collegiate Esports. Program participants will practice and compete at Harden Hall in a first-floor area that will be renovated to create an esports venue, including about 30 gaming stations.