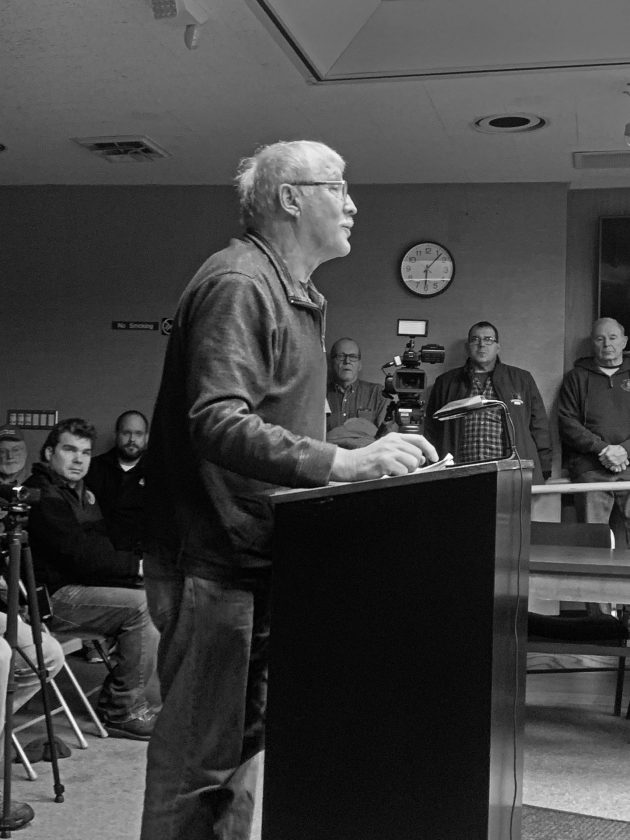 MARQUETTE — Local members of the United Steelworkers Union stated concerns to the Marquette County Board of Commissioners at its regular Tuesday meeting in regard to hearsay about the county mine inspector position.

USW local chapters 4950 and 4974 released a statement prior to the meeting, which stated: “It has come to our attention that the Marquette County Commission intends to act on significantly reducing the wage and benefit package provided to the County Mine Inspector. Both locals strongly oppose this action as this is a great disservice to our members and community. We feel that devaluating this position will put our members and community at a greater, unnecessary risk. We believe the commission intends to act on this during the upcoming meeting on Jan. 21.”

No documents pertaining to the county mine inspector position were included in the board’s packet or listed on the board’s Jan. 21 meeting agenda.

According to Commissioner Bill Nordeen, members of the USW had heard the county board was discussing the inspector position, which caused their concern.

During the meeting, Korpi addressed his concerns to the board during the public comment portion of the meeting.

“With the two active mines in Marquette County and the 250 inactive mine sites, we feel that the county mine inspector is a full-time position and deserves compensation as such,” Korpi said. “With the community’s safety as the utmost important issue at hand, we strongly oppose any type of reduction in wages or benefits to the county mine inspector.”

Underwood said that he met with Nordeen prior to the meeting to discuss the position.

“It’s my understanding for this conversation that some of the original wording in the state statute in regards to the county mine inspector may be outdated or no longer makes sense,” Underwood said. “If this is the feeling of the commission, I being an appointee of the governor’s commission on mining future, am offering to take any recommendations or issues back to Lansing and share with my colleagues.”

He noted that with help from the office of state Rep. Sara Cambensy, D-Marquette, updates to the statute are already being looked at by the union.

A couple of others spoke to the importance of the position, stating the inspector has been instrumental in improving the safety of the mines throughout the years and in the education of local youth on mining.

In a phone interview, Nordeen said the board did not have intentions to cut anything from the position but planned to review the Michigan statutory position that has been on the books since 1911.

“We really need to look at whether that statute is up to date and reflects what the mine inspector should be doing,” he said.

Marquette County Board Chairman Gerald Corkin assured those who spoke at the meeting that the board has no plans to cut the inspector’s wages and benefits.

At its meeting the board also:

≤ Approved importing digitized county deeds and images from the 1800s to 1983 into the county’s software system at a cost of $97,398.34 to be paid for from the automation fund.

≤ Awarded a contract in the amount of $35,500 to Oberstar Inc., the lowest bidder, for enhancements to the Sugarloaf Mountain Natural Area which includes a picnic area “with an accessible pathway which is comprised of a concrete pad for the trash compaction system and the installation of two picnic tables, a bike rack and a dog waste receptacle,” as well as eight interpretive signs along the trail, board documents state. The project is funded by a Michigan Department of Natural Resources trust fund grant with a match allotted from the forest and recreation portion of capital funds.