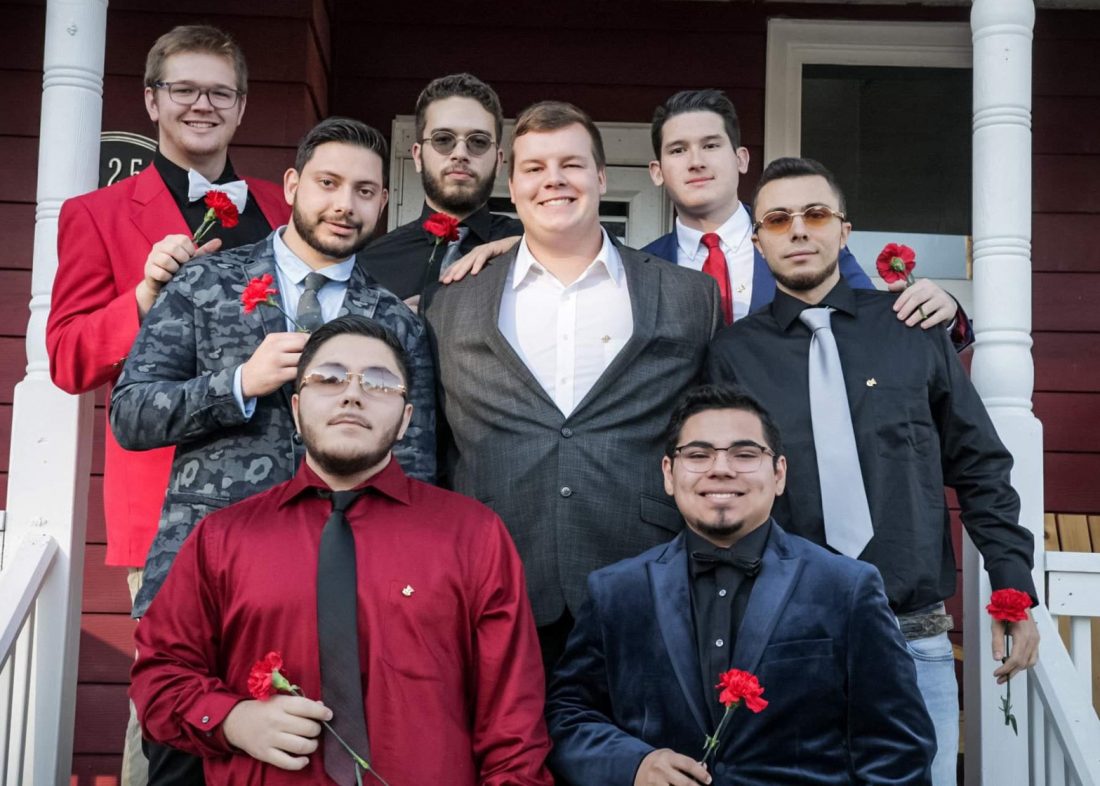 Leo Maiorana is seen, top row, second from left, among his Tau Kappa Epsilon pledge class at Northern Michigan University. Maiorana was injured in a car crash while participating in the TKE’s annual tub push for charity. To donate to Maiorana’s medical expenses, visit “Leo Needs New Legs, Among Other Things” on GoFundMe.com. (Photo courtesy of RJ Parrish)

MARQUETTE — Each year, the Theta-Iota chapter of the Tau Kappa Epsilon fraternity at Northern Michigan University holds a “Tub Push” to raise money for charity. A bathtub is pushed by members from Sault Ste. Marie to Marquette, roughly a 165-mile journey. During this year’s event, a tragedy occurred and three members were injured in a three-car crash near Shelter Bay between Munising and Marquette.

Two sustained minor injuries while one was seriously injured. Leo Maiorana, 23, was pushing the tub between two vehicles driving on the shoulder of M-28 with their hazards on when the rear vehicle was rear-ended “at a high speed by a careless driver,” the Leo Needs New Legs GoFundMe states.

“Not only did this total the car, but pushed it forward with enough force to slam into Leo himself. Not only did the impact break the Tibia in his left leg, but it shattered both bones in his right leg, both of which were compound, which means the bones broke through the skin. He was also concussed and sustained trauma to his left eye,” it reads.

So far, $6,395 has been raised of the $300,000 goal on the GoFundMe page. Funds raised will be used to pay for college tuition, damage to Maiorana’s car, specialized housing, follow-up care such as physical and psychological therapy, as well as a host of other medical expenses incurred and expected. At minimum, Maiorana’s recovery will take 18 months, the webpage states.

“You don’t think this is something that could happen to you, no matter who you are, whether you’re the person that ends up in Leo’s position or the person who ends up in the position that the driver was in,” TKE alumnus Ethan Reader said. “You never think that sending a quick text is going to hurt yourself or somebody else and Leo is active proof that all you’re doing is being selfish.”

To honor the three members injured in the accident and complete the tub push and its mission, a ceremonial finish of the event will take place in Marquette at 3 p.m. Friday. TKE members will take off from the corner of Front and Washington streets, and travel on Washington turning north onto Third Street, then take Fair Avenue to Presque Isle Avenue until reaching the Lake Superior Village Youth and Family Center along Longyear Avenue off Wright Street. The center, which provides youth with meals, tutoring, fun activities and positive role models, is the local nonprofit organization the fraternity chose to donate to this year along with St. Jude Children’s Research Hospital, which the fraternity donates to each year.

“What we’re trying to do is for all the guys who got hurt and for all the people that these events benefit, we’re really trying to finish what they started,” said Reader, the ceremonial tub push organizer.

The fraternity has been hosting the tub push for the past 60 years as a way for new TKE members and active members to bond while giving back to the community. The fraternity focuses on “making better men for a better world.”

“The point of being a part of TKE and really the point, I think, of being a part of my fraternity is that we want to prepare these 18-year-old kids who are coming into college and being away from their parents for the first time, we want to give them guys that they can look up to and emulate after so they can be successful going forward,” Reader said. “Being a part of all these charity events is a skill that we want to be able to teach people, being able to organize events like this and also just having the sense of self and sense of community to understand that it’s important that we’re looking out for people other than ourselves and looking out for people that may be in less fortunate positions.”

Each year funds raised from the tub push go to St. Jude Children’s Hospital and a local nonprofit organization.

“You never think it’s going to be your kid or your niece or your nephew, but there’s always a chance that there is and why wouldn’t you want to help somebody else going through what would absolutely be your nightmare,” he said.

After the event Friday, TKE members will greet area youth arriving at the center and collect donations for St. Jude Children’s Hospital and Maiorana at the door. The public is invited to attend. Children’s Christmas gifts will also be accepted at the door.

State Rep. Sara Cambensy, a representative from U.S. Rep. Jack Bergman’s office and members of the Marquette City Commission and Ishpeming City Council will be present.

“We just really want to emphasize that even though we’re the ones who put on the event, this really isn’t about us, it’s about the community,” Reader said.

For more information on Friday’s ceremonial tub push visit the Facebook page United Communities; Benefiting St Jude and the Village Youth Center. To donate to the tub push search for Tke Tub Push for St. Jude on GoFundMe.com, and to donate to Leo Maiorana visit Leo Needs New Legs, Among Other Things on GoFundMe.com.

MARQUETTE — The city of Marquette is announcing promotional fund and discount fee waiver applications are ...

MARQUETTE — Street closures for the annual Noquemanon Ski Marathon will be closed at 3 p.m. today until 4:30 p.m. ...