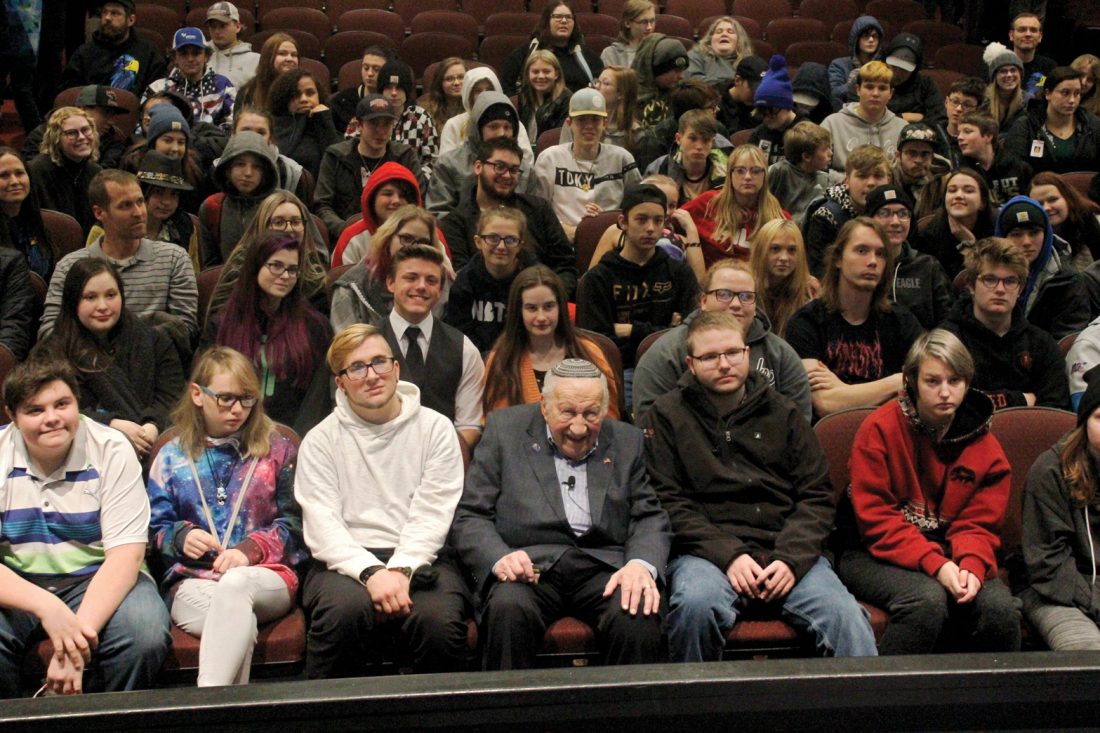 MARQUETTE — Perhaps our greatest impact is the one we leave upon the youth, those who will one day become the doctors, authors, teachers, soldiers and political leaders of our nation.

Holocaust survivor Martin Lowenberg spoke to area youth Tuesday afternoon and spread a message of living life with love to rid the world of hate.

Area students filled the Kaufman Auditorium in Marquette to listen to Lowenberg recount his experiences during World War II. He detailed how the Nazi regime gradually took over the village he grew up in and deported the Jewish people to concentration camps. He spoke of the loss of his beloved family members, most of whom were exterminated in gas chambers.

The death of Lowenberg’s twin brothers in the concentration camps was the most powerful part of his speech to Marquette Alternative High School senior Ava Gillespie. The thought of such heinous acts almost brought her to tears, but his story is one that must be shared, she said.

“I think it’s such an honor that we got to meet (Lowenberg), especially since he’s one of the last few remaining survivors, and I think it’s really important that he’s sharing his story because it’s the only way that we can really make sure that it doesn’t happen again, through education and awareness,” Gillespie said.

His message is one she will take forward in life.

“Be a kind human. There is no reason to hate for no reason or just give in to other people’s beliefs. Think for yourself and be conscientious of those around you,” Gillespie said.

During his presentation, Lowenberg reminded everyone to remain true to themselves, be honest with one another and to be kind. In a world that seems more divided each day, these values are important now more than ever.

“I don’t think people really know how to civilly discuss opposing issues anymore or really treat people with respect sometimes, and I think Mr. Lowenberg is a perfect example of how you can just be a gracious human,” Gillespie said.

MAHS teacher Cindy DePetro said it was amazing to see the students so engaged in Lowenberg’s words. The auditorium was silent as he spoke and students were leaning forward in their seats to make sure they caught every word of his story. She and MAHS Principal Andrew Crunkleton attended three of Lowenberg’s presentations within 24 hours and each time they learned something new or picked up on different details of his story, she said.

“It was an honor to hear so much about that story so that those stories are not lost,” DePetro said. “I feel like this is a gift, a gift that I hope keeps giving. I hope that these students today get to tell their children and their grandchildren of the time they met Martin Lowenberg and that they retell his story.”

She hopes Lowenberg’s story serves as a reminder that it’s OK to have differences, but there is no need for hate.

“If for nothing else, I hope they have more of a historical story in their brain, that they’ve learned that,” DePetro said. “And that everything they do from here on out, that they remember that message so they make a conscious decision to promote love and not get sucked into the negativity of the world.”