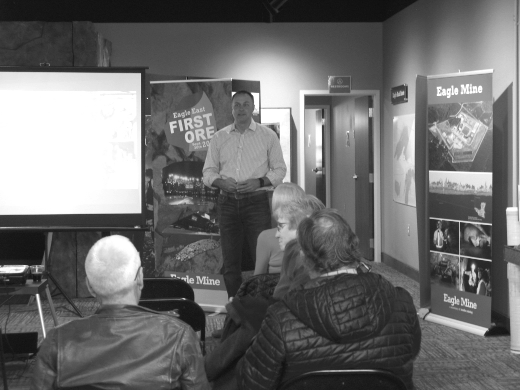 Eagle Mine Communications Manager Matt Johnson gives an update during a public forum at the mine’s Marquette Information Center on Friday. The forums are held every six months to update local residents and businesses about the activities at the mine. (Journal photo by Lisa Bowers)

MARQUETTE — Eagle Mine officials gave local residents an update on its operations over the last six months during a public forum Friday at its Marquette Information Center on Washington Street in Marquette.

Eagle Mine, a subsidiary of the Canada-based Lundin Mining Corp., is located in northern Michigamme Township. It has the distinction of being the only primary nickel mine in the United States and is also Lundin’s only operation in this country.

Eagle Mine External Relations Manager Matt Johnson said the first ore from Eagle East ore body, which is 1.25 miles east of the Eagle Mine and 2,000 feet below it, was celebrated on September 30.

“It really marks the completion of a three year $100 million project. That is how much it cost to build these tunnel systems down to Eagle East,” Johnson said.

The company was also able to extend the life of mine from the originally estimated 2022 out to 2025 through the use of underground infill and extension drilling, which is used to more closely define the size of an ore body.

Johnson said it takes 45 minutes to get from the underground entry to travel the 6 miles of tunnel down the Eagle East ore, which is 3,000 feet below the surface and below sea level.

“It’s also very hot, I was down there Wednesday last week and when I went into the portal it was 11 degrees and by the time I got down there it was 90 degrees. It was hot,” Johnson said. “So we recommend that everyone is drinking water to stay hydrated.”

He said the heat issue should be alleviated once some remaining ventilation tunnels are completed.

“We have a contractor on site who is developing vertical air shafts to increase the air flow,” Johnson said.

One forum attendee asked Johnson why the ore body would be mined before the ventilation system was completed.

Johnson noted that the the primary ventilation system is complete and the “air quality is good.”

“There are certain activities that we can’t do until we have air flow, and the primary air flow comes down in the two twin decline tunnels,” he said. “That’s why we need two tunnels side by side. We need one tunnel to bring in fresh air and one tunnel to exhaust the air. We do a lot of underground testing to be sure that the air quality is good for the miners.”

The biggest concern is diesel particulate matter, a byproduct of the diesel engines used underground, he said, which the mine tests for.

Johnson said the majority of the employees at the mine continue to be made up of local hires.

“We made a committment at the inception, before we even started mining, that we would try to make 75% of our work force local hires,” Johnson said. “We keep track of that every six months and generally now 80% to 81% are local hires.”

He said 200 of those work for Eagle Mine while the rest work for independent contractors.