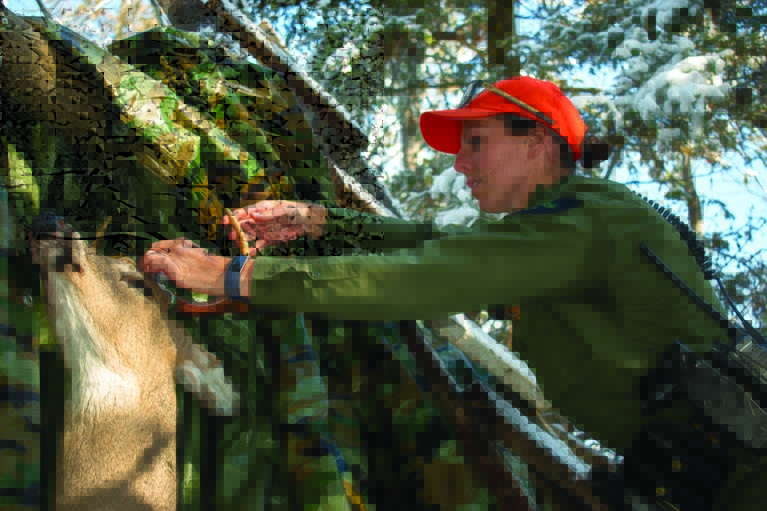 Michigan Conservation Officer Jennifer Hanson checks a tag on a deer kill in the western Upper Peninsula. The DNR just released an update for the firearm deer season. (Photo courtesy of the DNR)

MARQUETTE — Into this year’s firearm deer hunting season, which began Nov. 15, wildlife biologists with the Michigan Department of Natural Resources report an average 12% increase in the number of deer checked at stations across the region.

The preliminary results, reported as of the end of Saturday, also show a 2% increase over the 10-year average.

He said check station activity might pick up again after the weekend.

Check stations will be open through Wednesday, and then closed during the Thanksgiving holiday.

DNR staffers report deer brought to check stations generally have been in good condition, with most bucks checked — 85% — having been 2.5 years old or older. Antler development has varied.

Hunters have generally reported good deer numbers, including bucks, and seem happy with the season.

The DNR reported weather conditions have been good overall, with a few exceptions, one being high snow depths in some northern areas of the eastern Upper Peninsula.

“The higher snow depths spurred deer migration out of those areas and prevented some hunters from being able to get to their hunting spots, Jentoft said. “Many areas started with snow early in the firearm season, but snow has been melting and has receded in some areas as temperatures on many days have been above freezing.”

The DNR also said hunters have been submitting deer head samples for chronic wasting disease testing, particularly in and near the CWD Surveillance Area that comprises parts of Delta, Dickinson and Menominee counties. However, more samples from the core area will be needed to meeting testing goals there.

For a list of DNR check stations, including hours of operation and directions to the locations, visit Michigan.gov/DeerCheck; for more information on CWD, see Michigan.gov/CWD.

NEGAUNEE — The Negaunee Public Library will be offering a summer reading program for all ages from today through ...