Benefit to be held for Kaufman Auditorium piano restoration 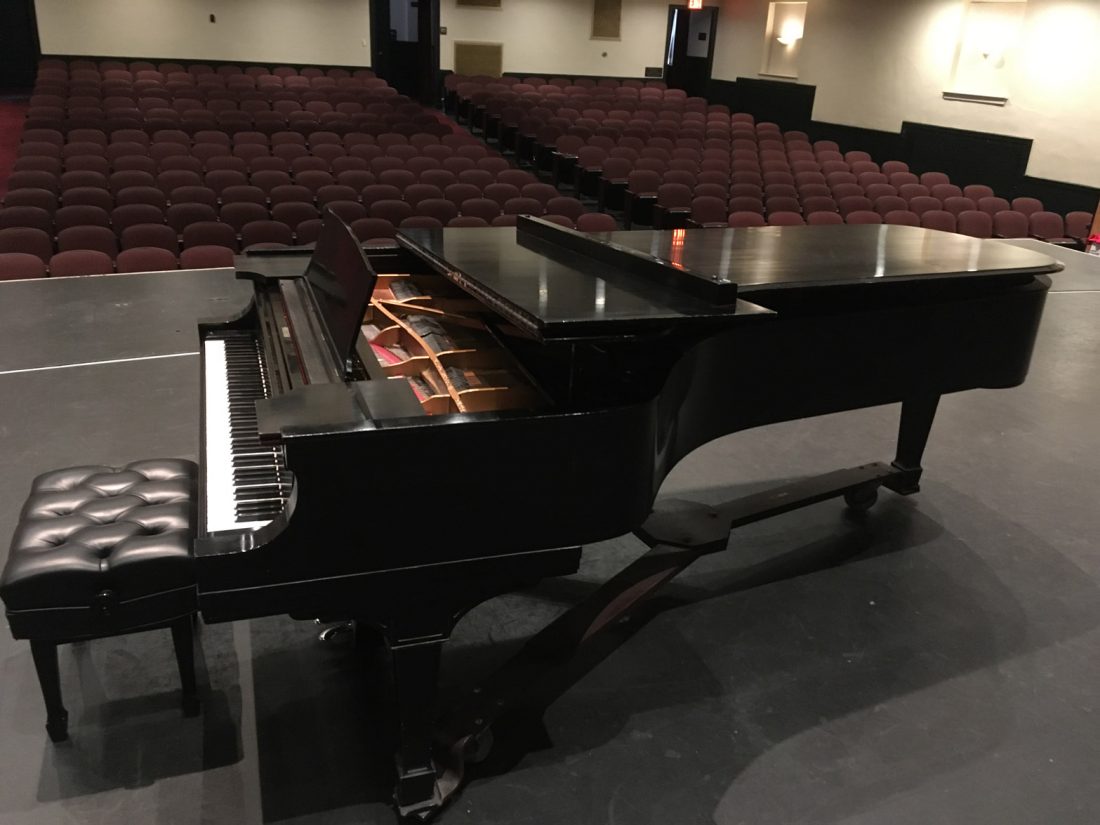 The Kaufman Auditorium 1927 Steinway grand piano is seen on the Kaufman stage. There are two theories as to how the piano became housed at the auditorium, according to Lantz Whitfield, director of the auditorium. One is that in the late 1920s, L.G. Kaufman asked famous American composer George Gershwin to pick out two Steinway pianos to be housed at Granot Loma, and at some point one piano was moved to the auditorium. The other theory is that Gershwin chose the piano specifically for the auditorium and it has been there ever since. (Photo courtesy of Kaufman Auditorium)

MARQUETTE — The Kaufman Auditorium located in Graveraet Elementary School in Marquette is often filled with the sweet sound of music, and it shares these sounds with the larger community through play productions, performances, symphony concerts and more.

An important part of providing these musical experiences is the Steinway concert grand piano housed in the auditorium. After nearly 100 years, the piano is in great need of restoration.

To help raise funds for the restoration, a benefit concert will be held from 7:30 to 9 p.m. Saturday at Kaufman Auditorium.

According to Kaufman Auditorium Director Lantz Whitfield, there are two theories as to how the Steinway piano came to be at the auditorium. One theory is that in the late 1920s, L.G. Kaufman asked famous American composer George Gershwin to pick out two Steinway pianos to be housed at Granot Loma, and at some point one piano was moved to the auditorium. The other is that Gershwin chose the piano specifically for the auditorium and it has been there ever since.

The restoration is being done by Lindeblad Piano Restoration located in New Jersey. It will cost $48,000 to restore and work includes “all action, belly, new soundboard and finish,” Whitfield said. The purchase of a brand new Steinway grand is over $140,000, he added.

Because of the great cost needed to restore the piano and its historical significance to the auditorium, concert pianist and local piano teacher Nancy Railey hopes the community will attend the benefit to help offset some of the cost.

“First of all, it’s going to be something that the community can do to help pay for a really important instrument,” Railey said. “The Steinway grand is used in all the Marquette Symphony concerts and sometimes we have guest artists who are pianists who play concertos and it’s important that we have a really beautiful instrument for them to play on. The other reason is that it’s wonderful music.”

Audience members can expect piano, violin and dance performances by members of the community.

“We’re doing a really interesting program with beautiful music not just piano solos but we’re doing a set of Kovitch dances written for piano and that is going to be accompanied by wonderful dancer Erica Waite and she has some young dancers who are going to be joining her in those,” Railey said. “Then we’ll have two pianists on one piano — four-hand pieces — and also a violin solo.”

In a town such as Marquette, it’s important to have a venue that can provide a variety of musical experiences, she added.

“I am a classical musician. I appreciate all kinds of music, but the great masters, the great composers have so much to give us today,” Railey said. “All the great classical composers, there’s so much depth and meaning in their music and I’ve studied it all my life. My soul gets fed by that music and I’d like to share that with everyone in the community.”

Suggested admission is $20 for adults and $5 for students. All tickets will be general admission and sold at the door starting at 6:30 p.m. Larger donations will also be accepted.

The Kaufman Foundation, Marquette Area Public Schools and the Kaufman Auditorium Capitol Improvement Fund have already made significant contributions toward the renovation.