The cover of Northern Michigan University journalism professor James McCommons new book “Camera Hunter: George Shiras III and the Birth of Wildlife Photography” is seen. The book details Shiras’ life as a pioneer of nature photography and influencer of the conservation movement of the 20th century. (Photo courtesy of James McCommons)

George Shiras III, right, known as the father of wildlife photography, and his Marquette assistant John Hammer are seen using two cameras, a spotlight and a chemical flash to photograph wildlife along the shore of a lake. (Photo courtesy of James McCommons) 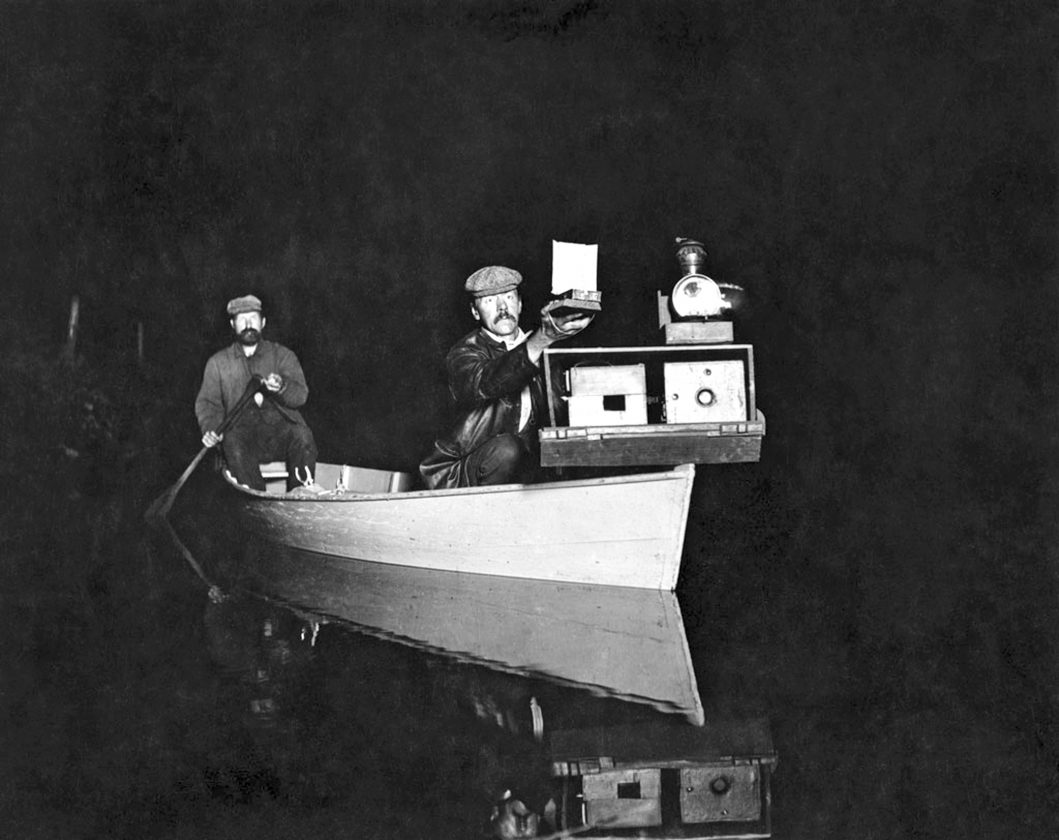 George Shiras III, right, known as the father of wildlife photography, and his Marquette assistant John Hammer are seen using two cameras, a spotlight and a chemical flash to photograph wildlife along the shore of a lake. (Photo courtesy of James McCommons)

MARQUETTE — You may have spent some time in the Shiras Room at the Peter White Public Library, gone to the Shiras Planetarium or looked out at Lake Superior from Shiras Park, but the full extent of George Shiras III’s work often goes unnoticed.

Not only was Shiras a frequent visitor and eventual resident of the Marquette area, he was one of the world’s first nighttime photographers and a crucial influence on legislation written to protect wildlife.

Shiras’ adventures as a boy, experimentation with photography and push for the preservation of wildlife is recounted in detail in James McCommons’ new book “Camera Hunter: George Shiras III and the Birth of Wildlife Photography.”

“My desire was to look at George Shiras’ contributions as a photographer, an environmentalist in the context of his time; so the progressive era, early 20th century was an extremely active period for government going out and doing things to save wildlife and pass laws in order to do that and to secure land for habitat,” said McCommons, a journalism professor at Northern Michigan University.

Shiras served just one year as a U.S. representative for the state of Pennsylvania, but he was a political leader in the movement for wildlife preservation. 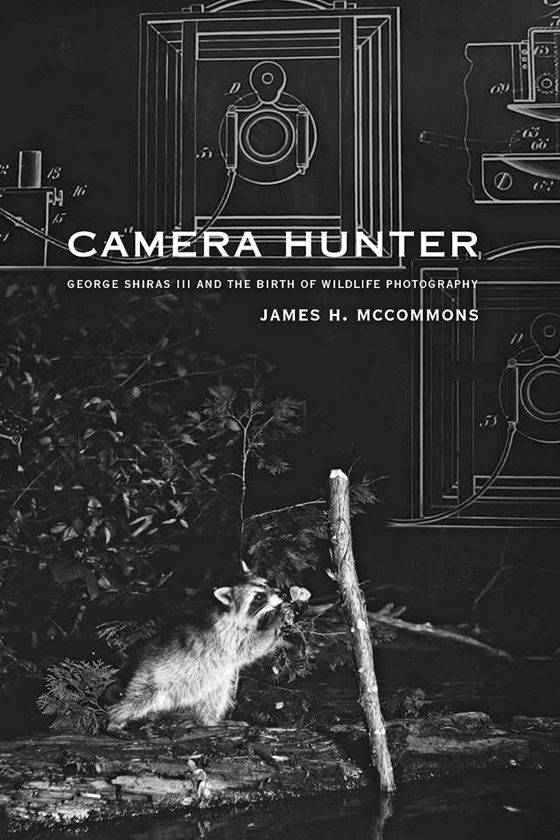 The cover of Northern Michigan University journalism professor James McCommons new book “Camera Hunter: George Shiras III and the Birth of Wildlife Photography” is seen. The book details Shiras’ life as a pioneer of nature photography and influencer of the conservation movement of the 20th century. (Photo courtesy of James McCommons)

During his time as a legislator, he pushed for the conservation of migratory birds, which were being shot in large numbers for sport, animal feed and for the use of feathers on women’s hats, McCommons explained. In 1913 the Weeks-McLean law was put into effect and prohibited spring hunting, the importation of feathers for women’s fashion and created hunting seasons. This law eventually became the Migratory Bird Treaty Act.

“It literally made birds, unless it was a game bird and it has a season on it, protected birds,” McCommons said. “It’s illegal today to go shoot a bird, to shoot an owl, a robin. That to me is really his amazing act.”

While Shiras’ political position gave him the opportunity to create such movement, he left because “after studying the law of men, (he) wanted to study the law of nature,” a line from Camera Hunter reads.

He then focused his life on his first passion — wildlife.

Shiras’ love for wildlife started as a boy in the Marquette woods. Born in Pittsburgh, his father brought the family to the area for the summers. Here he learned to hunt and through fire hunting, a popular method of the 1870s, changed photography forever.

This sort of hunting eventually became unsportsmanlike and Shiras turned to a more ethical way of appreciating wildlife with photography. After three years of trial and error he and his Marquette assistant John Hammer captured their first photograph using camera traps.

These traps were essentially the first trail cameras, McCommons said.

“What he would do is he’d put these things on shore and he would use trip wires and the deer would trip the wire and then set off the strobe flash and take the pictures and sometimes he would basically have four cameras there,” McCommons said. “The biggest problem he had was to synchronize the flash with the shutter because he had this big explosion of light, it dies out, that shutter has to open at the right time. So the exposures were critical and that’s why it would take weeks, even months to set up a shot and they would have to do tests and all those kinds of things.”

Though still a hunter himself, he encouraged others to pick up a camera instead of a gun as an alternate way of appreciating wildlife.

“Today we have the trail camera and it’s everywhere and that’s because it’s easy to use, and so I think George would be pretty happy about that,” McCommons said. “His camera trap has become something a lot of people use to appreciate wildlife and it’s also being used as a tool for biologists.”

Eventually Shiras’ photos were run in National Geographic completely changing the style of the magazine, McCommons said, and naming him the father of wildlife photography.

The legacy of Shiras’ work lives on through the Migratory Bird Treaty Act, his photographs, various Marquette landmarks and the alces alces shirasi, or the Shiras Moose — a subspecies of moose discovered by Shiras while on an expedition at Yellowstone National Park.

McCommons spent seven years researching Shiras’ work sorting through the archives of National Geographic, the University of Pittsburgh, the Library of Congress, the Smithsonian Institute and even the garages of Marquette homes gathering photo negatives, memos, scrapbooks and more.

And toward the end of this research he found out that Shiras and his wife’s fortune was still being put to use through the Peter White Scholar Award, which grants an NMU faculty member funds for research. The same award he was granted to research “Camera Hunter.”

McCommons will present “George Shiras III vs. the Nature Fakers” as part of Ore Dock Brewing Co.’s Science on Tap at 7 p.m. today. Admission is free.

A book launch will also take place at 7 p.m. Oct. 15 at the Peter White Public Library.

“Camera Hunter” can be purchased at Snowbound Books in Marquette, on Amazon or from the University of New Mexico Press.

“I hope they see George Shiras as more than a photographer and as a person of importance, particularly of importance in that period,” McCommons said. “He kind of stands up there with the giants of that period who did extremely important work to set aside land and save wildlife.”