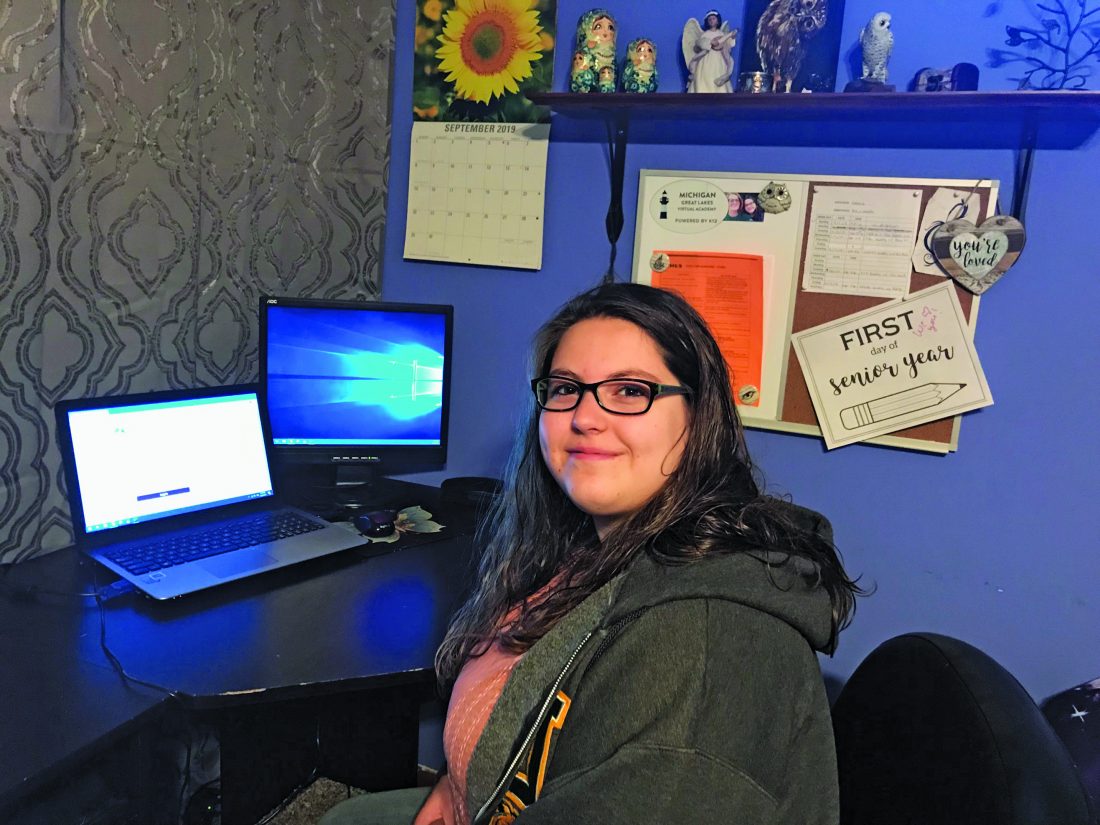 Serena Titsworth of Chocolay Township is getting her high school education through the Michigan Great Lakes Virtual Academy. The online option is a good choice for Titsworth, who plans to attend Northern Michigan University upon graduation. (Journal photo by Christie Bleck)

BEAVER GROVE — A traditional classroom is not the best choice for everybody.

Especially when you have a serious health issue.

Serena Titsworth, 17, of Chocolay Township has been attending the Michigan Great Lakes Virtual Academy, getting her high school education in front of a home computer instead of a chalkboard.

Titsworth, who lives with her aunt, Melissa Bowers, had pursued treatment for stress-induced irritable bowel syndrome. Her diagnosis caused her to miss school often, so she transferred to the MGLVA to get the scholastic flexibility she needed.

This academy combines traditional high school academics with industry-relevant, career-focused electives in either business or health sciences that gives students a jump-start on their college and career goals.

“It was just easier to get out of that environment and be more independent and be able to manage my health a little better by doing an online setting,” Titsworth said, “because I didn’t have to worry about going to the bathroom when I needed to, or if I was going to get cold and it would give me anxiety or something.”

She transitioned from being a home-bound schooler to taking the online route.

“Her anxiety’s been treated, so it stopped the symptoms with IBS,” Bowers said.

That hasn’t prevented her from moving forward with her studies, as she plans to finish high school in January.

In fact, Bowers said her niece is graduating early.

In the meantime, she’s learning about a variety of subjects through the MGLVA.

These include probability and statistics, personal finance, geography and British literature.

She enjoys her science classes the best, with physical science, which she took as a freshman, at the top of the list.

“They taught me how to write a resume, which I used for Kohl’s, and it also allowed me to know what I kind of wanted to do and where I wanted to go for college,” she said.

Titsworth might not have a teacher breathing down her neck while she’s reading a book, but just because she’s taking courses online doesn’t mean her work isn’t being graded.

Each of her classes has individual teachers, she said.

“It’s just like a public school except it’s all online,” Titsworth said.

Life is not all about school, though, and she’s found plenty of extracurricular activities to keep her busy. For instance, she volunteers in the Feed America program at Silver Creek Church in Harvey and belongs to the Teen Advisory Board at the Peter White Public Library in Marquette.

Titsworth also works at the store at Silver Creek Thrift, a ministry of the Harvey church.

It’s understandable if the online education doesn’t work for every student. After all, some are more social than others and thrive better in a brick-and-mortar environment.

However, it works for Titsworth.

“With social things, I don’t feel a loss in that way, but also I don’t have as much opportunity for friendship,” Titsworth said.

She noted MGLVA has a local Beacon Buddies program and a social hour to help students connect with each other, although she acknowledged Beacon Buddies isn’t an option because of the low number of MGLVA students in the Upper Peninsula.

“It is really good downstate, like Detroit,” she said.

Titsworth believes she will be ready for college life, especially since she already holds a job at the local Kohl’s department store, which allows her to expand herself socially little by little.

“I’m really confident that I can go into NMU and be fine,” she said.