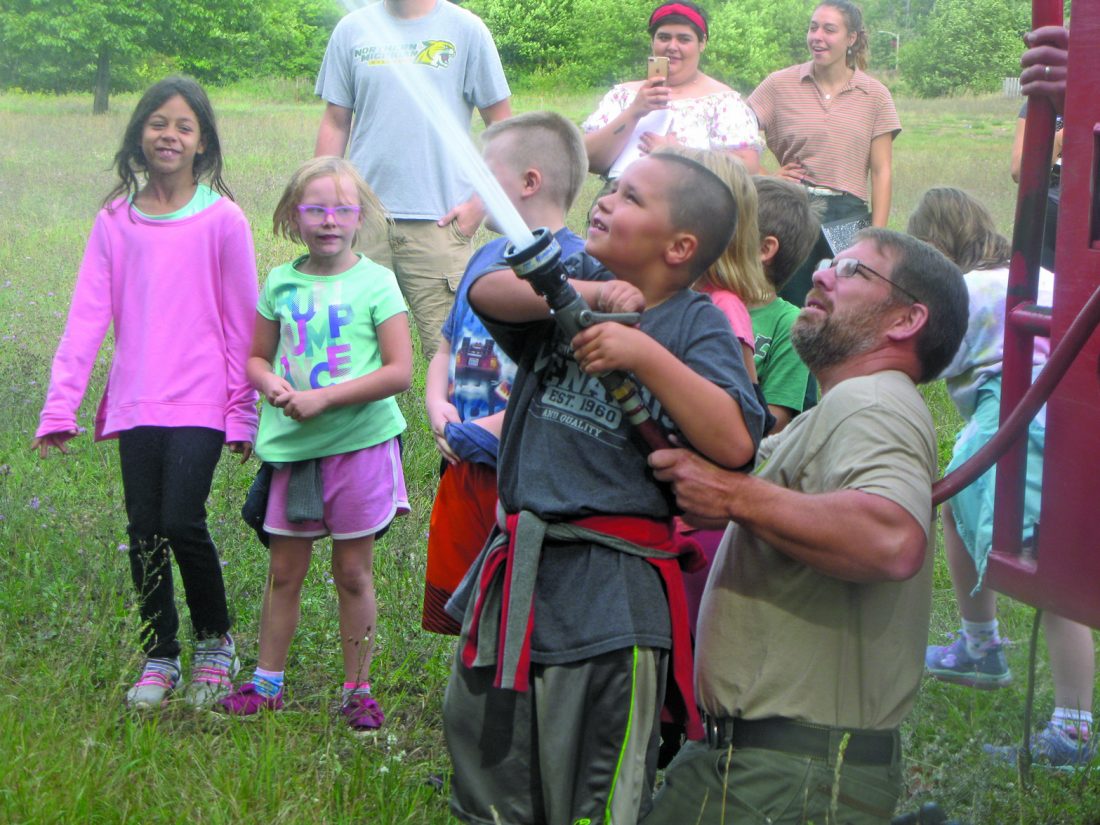 K.I. Sawyer Elementary School third-grader Antonio Sayers uses a fire hose with the help of Pete Glover, a fire officer with the Michigan Department of Natural ResourcesÕ Forestry Management Unit in Gwinn, on Thursday at an Agriculture in Education event at the Jacobetti Complex at Northern Michigan University. Teacher candidates taught Sawyer students about agriculture and ecology through hands-on activities. (Journal photo by Christie Bleck)

MARQUETTE — Give a kid a fire hose and fun ensues.

Northern Michigan University’s School of Education, Leadership and Public Service collaborated with K.I. Sawyer Elementary School on Thursday at the Jacobetti Complex for an Agriculture in Education event in which students could look at tomato plants up close, smell chives and try actual Michigan Department of Natural Resources fire officer equipment.

Activities centered on subjects such as jobs and food in agriculture, the soil food web and pollination, with participants including the NMU Department of Earth, Environment and Geographical Sciences; the Harvey-based Chocolay Raptor Center; Michigan State University Extension; and the DNR Forestry Management Unit in Gwinn.

“One of the big questions that we wanted to explore was: How does building meaningful relationships in the community of learners impact learning?” VanEnkevort said.

VanEnkevort said the teacher candidates had to prepare for Thursday’s event, with one aspect being to figure out how to hold kids’ thinking — a literacy technique.

They too were asked to tie in the activities with the Next Generation K-5 science standards.

“They’re getting practice working with kids, hands-on with guidance from community partners,” VanEnkevort said. “They’re getting familiar with standards and how to apply standards to the different activities, and they’re also practicing literacy techniques.”

She noted the candidates also had to reflect on these ideas: What happened when you were doing the activities? What did the teacher do, and what did the kids do? What was the outcome, and what would you have done differently?

For example, after sniffing a chive, third-grader Hollister Eberle was asked about the experience.

Some students didn’t want to touch tomatoes, but they learned about them anyway.

“They’re not ready for harvest if they’re green,” said NMU education student Tabitha Stellino, who helped in the hoop house at the Jacobetti Complex where a variety of crops, along with a towering sunflower plant, are grown.

In “Anatomy of a Seedling,” youngsters were to learn what conditions are necessary for seeds to “wake up” and grow. In “Pollination with ‘Polly Nadar,'” students were to divide into two groups for a relay race in which each student is a pollinator that must transfer pollen from one flower to another before passing on the task to the next student.

After learning the ages of the students, Glover told them, “I’m glad you’re this age because we need some new fire officers.”

The kids learned firefighting facts, such as the animals that would be protected in a forest fire and knowing the weight a bridge can handle before a heavy fire truck passes over it.

They also could try on an official suit and helmet.

The officers got a big response, though, when they asked who wanted to try a fire hose.

They got a lot of enthusiastic takers.

With their professional help, third-graders got to aim a hose — at a nearby pine tree that, fortunately, wasn’t ablaze.

The day also was to include a tour of NMU.

MARQUETTE — Troopers from the Michigan State Police Negaunee Post were dispatched to National Mine Friday morning ...

Need for blood is critical

MARQUETTE — The U.P. Regional Blood Center is currently experiencing a severe critical need for O-, A-, A+, B- ...