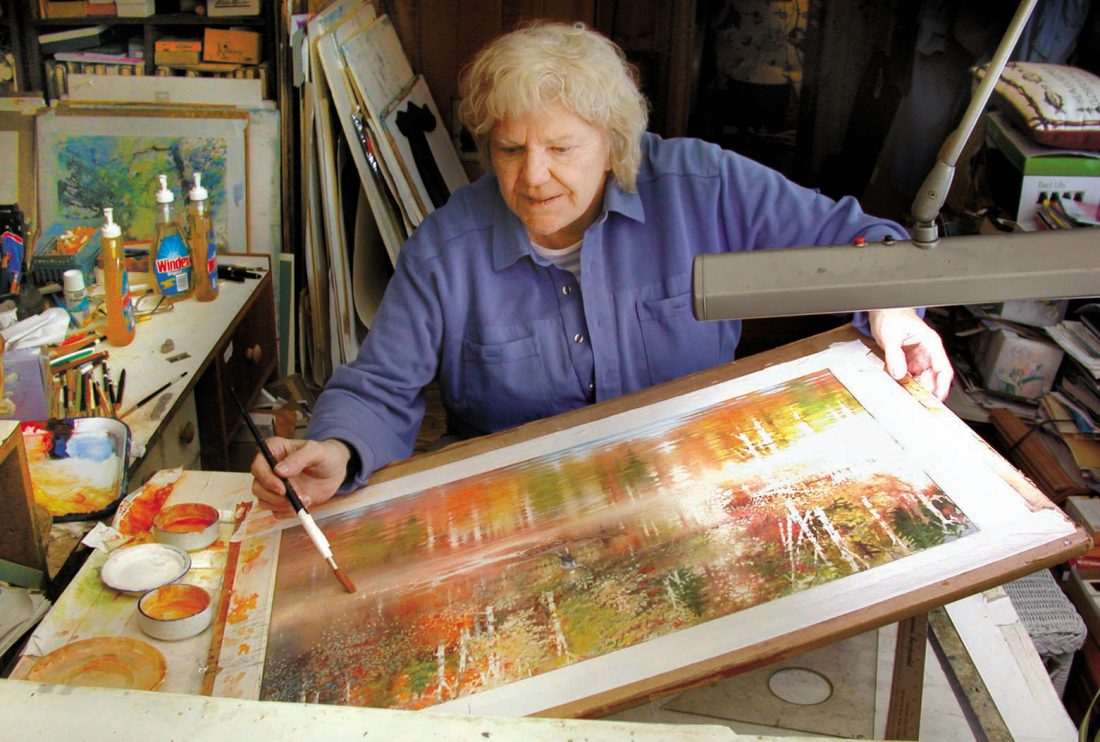 MARQUETTE — The nation has lost one of its prominent watercolor artists with the passing of renowned artist and Marquette resident Nita Engle on Thursday at age 93.

Engle, who was born to Swedish immigrants in Negaunee on Sept. 30, 1925, attended high school in Marquette and the current Northern Michigan University, was a famed watercolorist who won numerous awards for her distinctive landscape paintings.

“One of America’s foremost watercolor artists, Nita Engle’s landscape paintings take the viewer into the scene itself. Nita’s work is inspired from all parts of the world: from Europe and Asia to her home on the south shore of Lake Superior in Michigan’s Upper Peninsula; from the desert plains of Africa to the frozen tundra of Alaska, her paintings bring the world alive,” a U.S. State Department Art in Embassies biography of Engle states. “Most of her watercolor techniques have been developed and refined through years of experimentation. Nita says, ‘The exciting thing about painting in watercolor is that it moves on the paper, unlike oil.'”

After attending NMU, Engle went to the Chicago Art Institute for four years, taking a watercolor course in her senior year, according to a 2003 interview.

“I loved it immediately, more than any of the other things I’d done,” she told Dr. Russell Magnaghi in the June 2003 interview.

After graduation, she worked at a newspaper and became art director for nine years at an advertising agency, painting and showing her work throughout those years, Engle said in the interview.

Her work was in publications throughout the nation and after living in New York, Chicago, San Francisco and England, she returned to her home in Marquette.

Of her thoughts on painting, she told Magnaghi: “You have to be in love with it to paint it. Usually it’s some kind of light. With watercolor you can do that so well with light … With watercolor you introduce the paint and water and it does things all by itself. Beautiful things happen with watercolor. No matter if it gets out of hand and does things I hadn’t intended, it doesn’t matter.”

A member of the American Watercolor Society since 1969, Engle exhibited her work throughout the United States, sharing exhibitions with fellow famed artists Winslow Homer, N.C. Wyeth and Norman Rockwell.

One of the many awards Engle received in her career was the Artist of the Year award from the American Artist magazine in 1984, which is “an honor few artists have been recognized with,” according to the State Department.

In the year following, PBS television filmed a documentary of her career entitled “Wilderness Palette — Nita Engle in Michigan.” Then, in 1986, Engle was bestowed with an honorary doctorate degree by Northern Michigan University.

Engle “also had the honor of representing the United States as one of only 20 U.S. artists that exhibited at the ‘International Waters’ event in Taipei, Republic of China,” according to the U.S. Department of State.

Engle took part in several Great Women Artists of America Shows held in Chicago and is the author of the 2007 book “How to Make a Watercolor Paint Itself: Experimental Techniques for Achieving Realistic Effects,” which has given people around the world a chance to learn from Engle.

She passed away at the Marquette County Medical Care Facility in Ishpeming. Arrangements are being handled by the Fassbender-Swanson-Hansen Funeral Home.

MARQUETTE — The City of Marquette Compost site, located at 1415 Pioneer Road, will be closed Saturday in ...