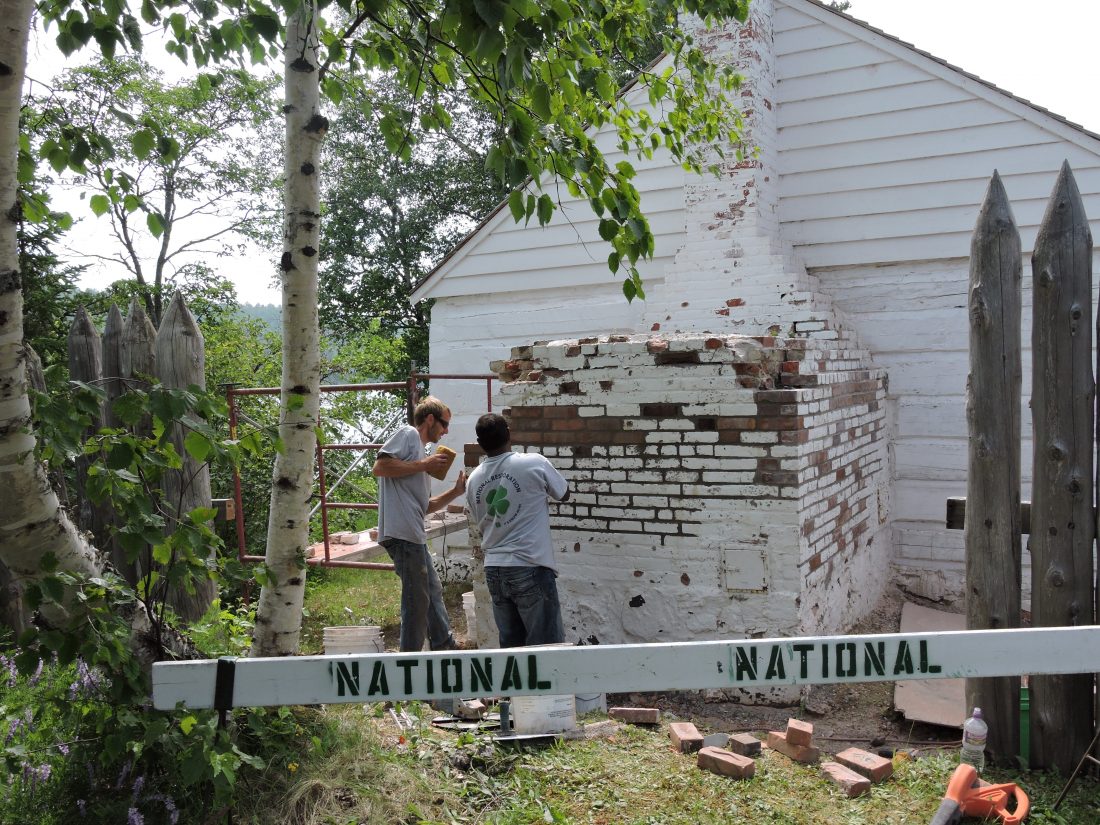 Two masons with National Preservation work to restore the Fort Wilkins post bakery oven and its chimney. While the other chimneys within the fort complex are original, dating back to 1844, the bakery oven has been rebuilt several times. (Houghton Daily Mining Gazette photo by Graham Jaehnig)

COPPER HARBOR — Two major restoration projects are occurring this summer at Fort Wilkins State Park: one involves the Copper Harbor Light House, which is not currently open to the public, and the other is within the fort complex, to repair and restore chimneys on the buildings.

“The chimneys are original, dating back to 1844,” said Barry James, historian and education coordinator for the Michigan Iron Industry Museum in Negaunee Township, and also an adjunct professor of history at Northern Michigan University in Marquette. “At 175 years old, there has been a lot of deterioration and weathering due to the elements.”

On May 28, 1844, Capt. Robert E. Clary arrived at Copper Harbor in command of Companies A and B, Fifth Infantry Regiment, 105 officers and enlisted men, with orders to construct a military post on a stretch of land located between the harbor and an inland lake that came to be known as Lake Fanny Hooe.

“The state of Michigan contracted with National Preservation to do the brick work,” James said. “And they have repaired and restored 14 chimneys within the fort complex.”

In addition to the repairs to the chimneys, the post bakery is also receiving work. The bakery was in serious disrepair, so the bakery oven is also part of the restoration project.

Prior to this year’s restoration project, in 2018, an archaeological examination of the ground around the bakery’s exterior was conducted in hopes of finding another oven.

“We are investigating what kinds of liberties the WPA (Work Projects Administration) took when they restored the fort (in the 1930s),” said Stacy Tchorzynski, archaeologist with the Michigan State Historic Preservation Office during the June 2018 project. “It’s kind of a Pepsi challenge between what they did, and what we can know from photographs, maps, drawings and the archaeology.”

James said that based on oral histories with people who worked on the fort with WPA, workers tried in all cases to use original materials they could salvage to rebuild structures.

“We’re not 100% sure of the architecture of the bakery oven,” said James. “We know that it’s been rebuilt several times, and at one point, we were hoping to find that there were two ovens back there.”

James said that a line drawing of the fort done in the 1800s shows two chimneys on the bakery building, and today there is just one.

“So, we were hoping to find some architectural evidence,” he said. “That might lead us in a different direction about the build and the style of that structure, but we haven’t found it at this point yet.”

For the oven and the chimney that are there, repair and rebuild work is going on, said James.

“Where bricks need to be replaced, they are being removed and mortared back in with new,” he said. “Also some tuck pointing and flashing work as part of the project.”

James said the completion date was expected some time in mid-July.

Dinner to honor apprentices in Harris

HARRIS —There will be an Apprentice of the Year dinner on Saturday at the Island Resort and Casino in ...

NEGAUNEE — The Michigan Iron Industry Museum Advisory Board will meet at 3 p.m. today at the museum in Negaunee ...