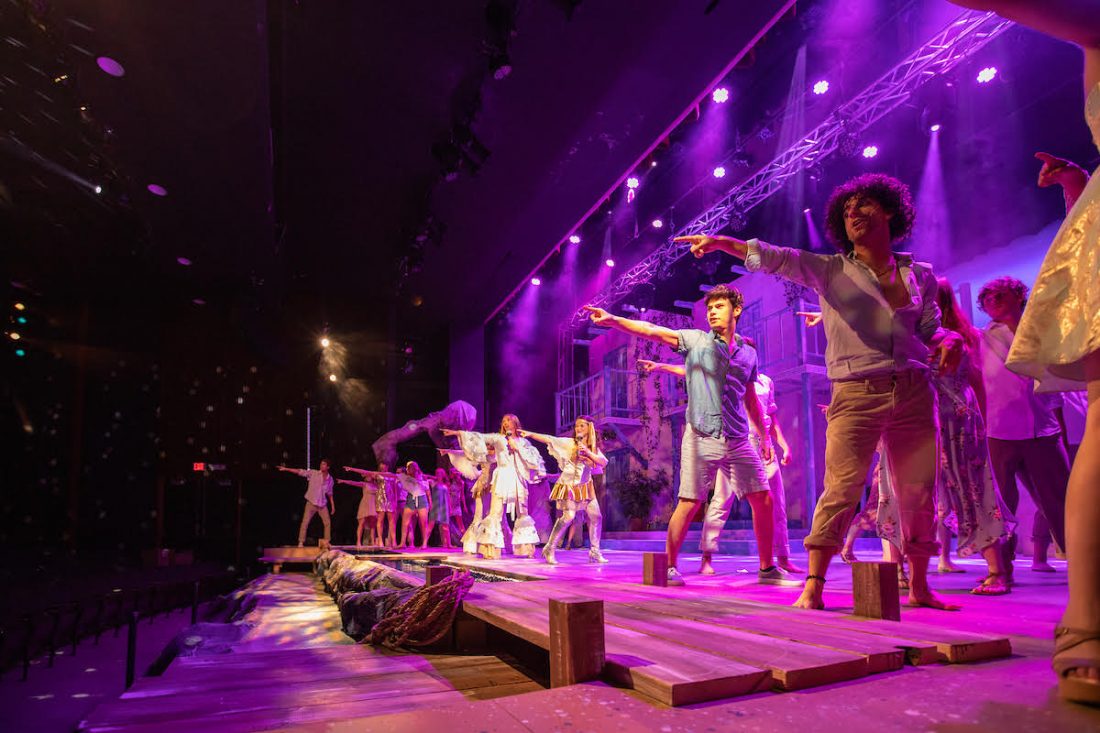 Mamma Mia! The Forest Roberts Theatre at Northern Michigan University continues their summer season with a big, literally splashy production of “Mamma Mia!” With a book by Catherine Johnson and music and lyrics by Benny Anderson and Bjorn Ulvaeus, “Mamma Mia!” is the most successful “jukebox” musical in history, having played over 5,000 performances on Broadway.

Set on a colorful Greek island, the plot is simple. Twenty year old Sophie Sheridan is about to be married, and after reading her mother’s (Donna’s) diary, she invites her three possible dads (Harry, Bill and Sam) to the wedding. Strung together by catchy ABBA songs, hilarity ensues as the wedding approaches.

Forest Roberts Theatre’s new summer season gives NMU Theatre and Dance students the opportunity to work in a professional environment right on the NMU campus. The students work with seasoned professionals and a variety of community members. The result is a highly professional, polished gift of a production to the Marquette community. Director and longtime FRT faculty member Shelley Russell, known for so many great productions at NMU, must have had the time of her life with this company!

Lilith Kontos and Megan Hibbard are delightful as Sophie’s friends, Ali and Lisa; Brady Skewis and Patrick McCommons are often hilarious as Pepper and Eddie. There is talent galore in the three (possible) dads, and all three are veterans of the FRT stage. Tom Laitinen is appropriately stuffy as British banker Harry Bright, Orion Couling is strong as Aussie Bill Austin, and NMU Theatre and Dance faculty member Paul Truckey as Sam Carmichael (the architect) again reminds us how lucky we are to have a true theatre professional performing (and also directing and teaching) in our community.

The engaged couple, Sophie and Sky, played by NMU students Audree Stephens and Mikhail Moran, are indeed engaging. They both have strong singing voices and really shine during “Lay All Your Love on Me.” Stephens has some very beautiful “daughter” moments during “Slipping Through My Fingers.”

This trip back in time is courtesy of “Donna and the Dynamos.” NMU graduate Jill Vermeulen shows maturity well beyond her years as Tanya, and Barbara Rhyneer, usually seen with a conductor’s baton or violin as a music department faculty member at NMU, will surprise audiences with her cute and fun portrayal of Rosie.

“Mamma Mia!” really is Donna’s story. It’s about overcoming adversity, strength and perseverance, and raising a child as a single mother. Aurelia (Liza) Hunter gives a solid performance as Donna Sheridan. Hunter epitomizes the strong woman, has an amazing singing voice, and takes us through the many moods of Donna seemingly with ease.

One word for Jill Grundstrom’s choreography: WOW! As is Grundstrom’s trademark, all movement is well designed, clean and well executed. Costumes by Susan Candey and crew are colorful and professional. Watch for numerous quick changes!

Vocal direction is by Jeff Bruning and Anna Morrison. Bruning and Morrison get the best out of their singers. Blending live vocals with pre-recorded tracks is always challenging, but this cast does an amazing job of capturing the ABBA sound and style. Dan Zini, sound designer, is to be commended for mixing the vocals and tracks. The strong disco beats are just loud enough to keep the FRT rocking at the right level.

Bill Digneit’s multi-level unit set is functional and attractive, enhanced by David Pierce’s lighting design, with rolling furniture pieces and many quick changes. Steve McClain is to be credited for coordinating a very tight and entertaining technical program.

Get your tickets now for this fantastic production (they are going fast)! You will smile, you will laugh, and probably even sing along!

“Mamma Mia!” plays at NMU’s Forest Roberts Theatre tonight through Saturday at 7:30. Tickets may be purchased online at tickets.nmu.edu, by phone at 906-227-1032, or in person at any NMU ticket outlet.