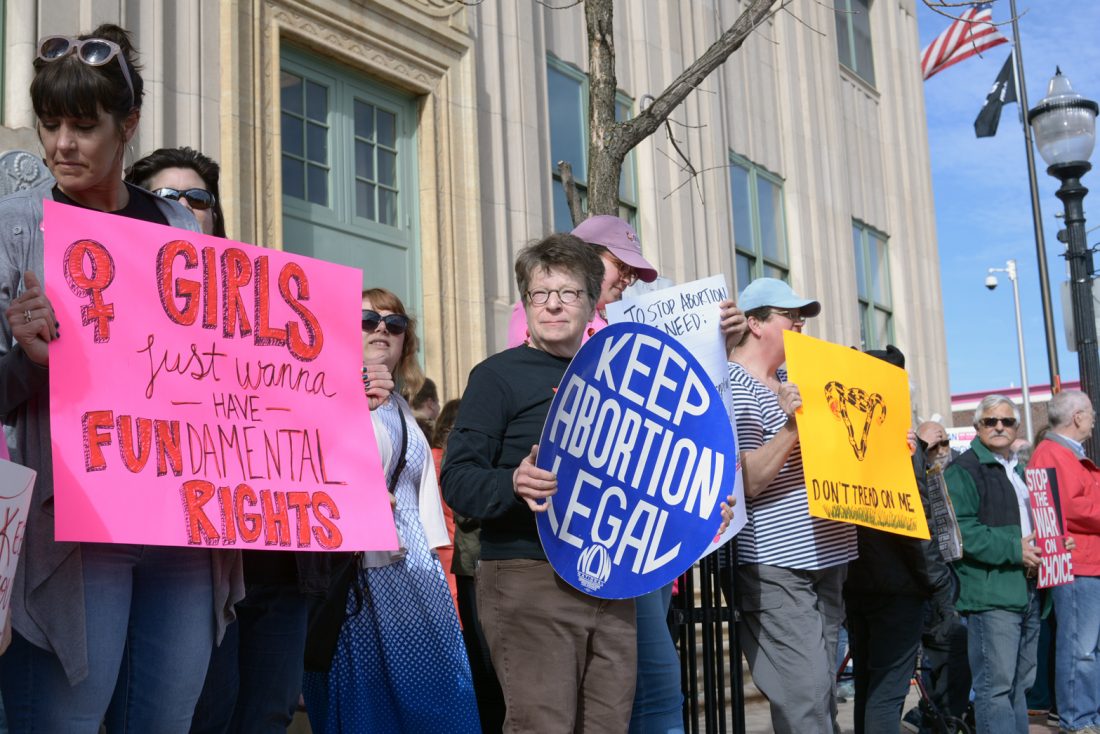 Protesters gather at the post office along Washington Street in Marquette for the Reproductive Right Rally on Tuesday evening. Hundreds of rallies took place all across the country in response to several states enacting abortion bans in Missouri, Ohio, Georgia and Alabama. This event is also a response to Michigan House and Senate Republicans voting to ban dilation and evacuation, or D&E abortions, on May 14. (Journal photo by Corey Kelly)

Hundreds of rallies took place all across the country, including one that took place at the Supreme Court.

“This is about our legal, constitutional right to health care,” Jen Hill, rally organizer, said.

The rally took place in response to several states enacting near abortions bans in Missouri, Ohio, Georgia, and Alabama. This event is also a response to Michigan House and Senate Republicans voting to ban dilation and evacuation, or D&E abortions, on May 14. House Bills 4320 and 432 define D&E abortions as second-trimester abortions and make it a two-year felony for a physician to perform one unless it was performed as a life-saving measure with no exceptions for rape or incest. Physicians could receive up to a fine of $50,000 fine and a patient’s spouse, or parent could bring a lawsuit against the doctor performing the procedure.

Dozens of men and women filled both sides of the street near the intersection of Third and Washington streets carrying signs with such saying as “keep your laws off my body,” “stop the bans,” and “girls just want to have fundamental rights.”

Protestor Jay Jackson held a cardboard sign that read, “I am a woman, not a womb.”

“I’m very passionate about women’s rights, and feminism and everything is making me terribly angry right now, so I am here doing something about it,” Jackson said.

Thomas White decided to join the protest saying, “Men have 100% control over their bodies, so I think women should have it over their own.”

The first speaker at the event was retired nurse Martha Fitzgerald, who refers to herself as “a card-carrying liberal.”

In her speech, she mentions that In 2019 alone 250 bills, restricting abortion, have been filed in 41 states, including Michigan.

“Here are the facts, politicians are not doctors, these bans are in alinement with excepted medical practices and criminalize care, Michigan politicians are playing doctor, writing bills, with no scientific or medical basis that dictate patient care and are taking money from special interest groups like Right to Life,” Harriman said.

Kate Argall, who spoke as a representative of Governor Gretchen Whitmer’s Upper Peninsula office, assured the crowd that Gov. Whitmer is prepared to veto restrictive abortion laws if passed in the house.

“Governor Whitmer is ready with her veto pen to protect Michigan woman and ensure that they get the care they need,” Argall said.

Lastly, Noordyk and Hill encouraged the crowd to call their representative to note their opposition to House Bill 4320 and 4321. Information cards were passed out among attendees to encourage action after the event.

Local musician Kerry Yost ended the formal program by leading the crowd in a call-and-response song by Melanie DeMore.

MARQUETTE — The Marquette Lions Club is accepting donations of returnable cans and plastic bottles (no glass ...

Band asks no chairs be brought

MARQUETTE — Beginning at 7 a.m. today, Union Street between Presque Isle Avenue and Wilkinson Avenue will have ...

LWV spreads word about voting resources in advance of elections

MARQUETTE — With the COVID-19 pandemic preventing much of the in-person voter outreach that is usually conducted ...