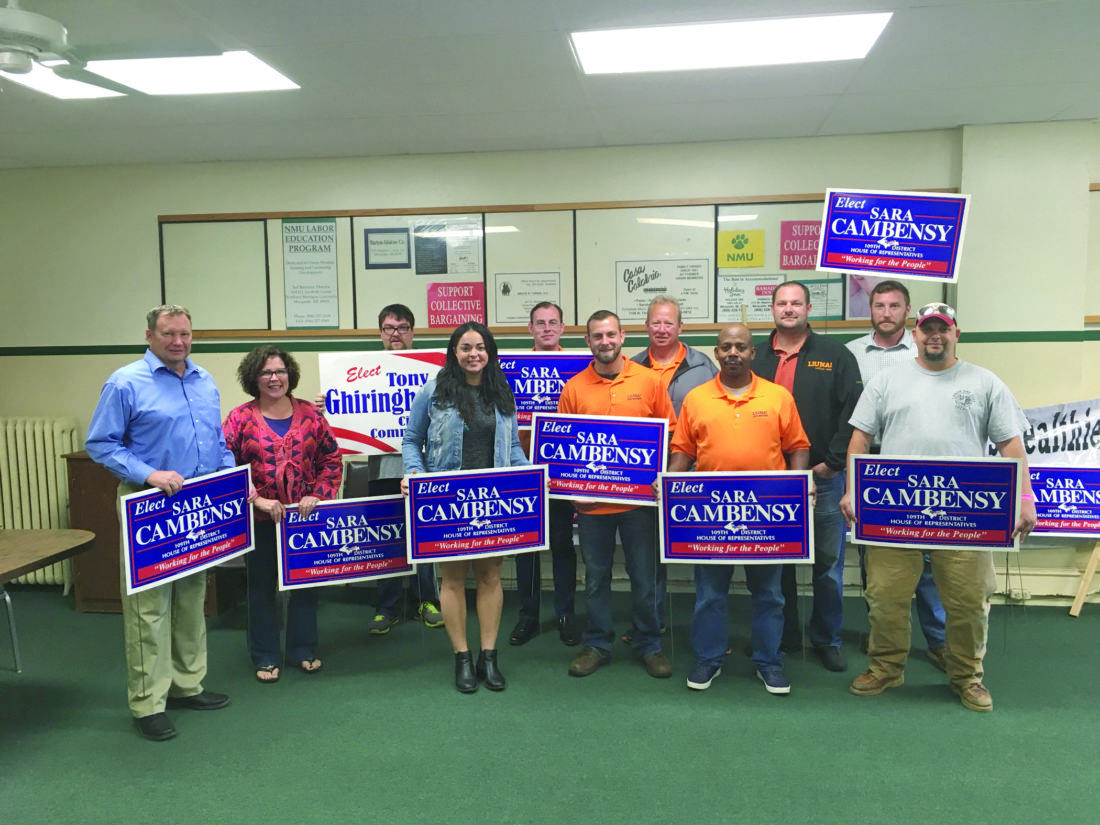 MARQUETTE — A group of local union members with the U.P. Regional Labor Federation and the Michigan Laborers construction union hosted a canvass kickoff in Marquette Wednesday to volunteer for Marquette City Commissioner Sara Cambensy (D-Marquette), who is running in the Nov. 7 special election for the Michigan House of Representatives in the 109th District.

“The U.P.’s working families need a leader who shares our values and has the right priorities, and that’s why we’re hitting the doors to support Sara Cambensy,” said Mike Thibault, president of the U.P. Regional Labor Federation, in a Michigan American Federation of Labor and Congress of Industrial Organizations press release. “Sara has spent her entire life working for the people, and that’s why we need to send her to Lansing, so she can fight for good jobs, strong paychecks, and better schools for the U.P.’s working families.”

The U.P. Labor Federation and the Michigan Laborers have endorsed Cambensy for State Representative because she has a proven record of fighting for the U.P.’s working families, the release said, and that as a city commissioner, Cambensy has supported local hiring policies, advocated for displaced miners and protected the jobs and paychecks of public employees.

Union volunteers will spend three days this week knocking on hundreds of doors across the 109th District to have one-on-one conversations with fellow union members about why they should support Cambensy in the special election on Nov. 7.

Cambensy’s campaign also issued a press release, saying Cambensy has picked up the endorsements of several key organizations across the state.

“Michigan needs to become a state that once again invests in people,” Cambensy said in the release from her campaign. “Upper Peninsula families are struggling to make ends meet because our legislature and governor have prioritized tax breaks for wealthy donors and corporations above small businesses and public services that help our local communities the most. The large revenue shortfalls that tax giveaways create in our state make investing in infrastructure, healthcare, public safety and our schools fall back onto our local communities to fund. Our workforce and small businesses that create the majority of jobs for our state can’t afford to keep paying more. That’s why I’m honored to have the support of so many organizations that represent the backbone of our state — the nurses, educators, laborers and local leaders who are hungry for change.”

In the release, Thibault said Cambensy has unique insight into both private and public sector employee issues.

“To know that she is more than capable of navigating both worlds is a big plus,” Thibault said. “We know Sara will be a fighter for those issues and bring justices to important situations, as well as serving as a firewall against attacks on labor coming from the current Legislature.”

The release states: “By focusing on closing the ‘Dark Store’ tax loopholes and corporate giveaways, Cambensy is fighting to see funding restored to the things that matter most to working families in the U.P.: schools, roads and public safety services. Her top priorities if elected include creating good-paying jobs for the 109th, working to see public schools fully-funded, and increasing revenue-sharing back to local government for infrastructure projects.”

The MEA also provided a statement in the release.

“We are excited that as a fellow public school employee, Sara has the concerns of all educators — be they teachers, administrators, bus drivers or support staff — in mind,” said Diana Kelly of the MEA.

“She understands what it will take to get our public schools back on track, and I know she’s going to fight to build the education system our students deserve.”