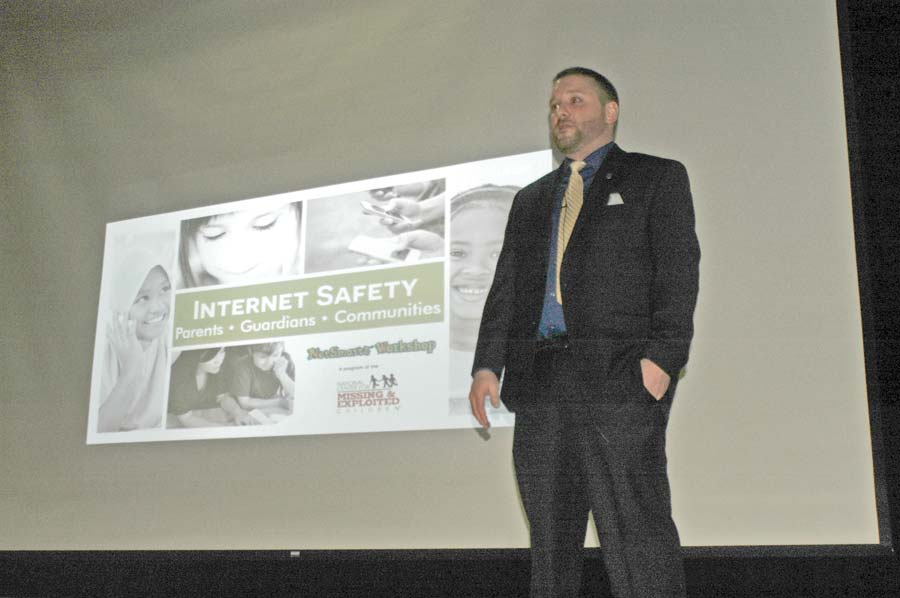 MARQUETTE — Being a kid today is not the same as when Negaunee High School parents were kids.

A big difference? There were no cell phones with cameras or social media with many ways to connect with other people.

That brings a tremendous risk for kids unfamiliar with the dangers of online predators. So, parents have to be on the alert.

“What do your kids do online?” Wilton asked.

Most parents probably have some inkling, but maybe not to the extent they should.

The purpose of his talk, he said, was to bridge the gap between adults and their youngsters

“The average kid — I would say at least 50 percent — are going to have two Facebook pages,” Wilton said.

One is the open, family-friendly one while the other has a fake name where the racier content is found.

However, Facebook could be considered tame compared to the myriad of apps that are out there.

Wilton listed a few, some more legitimate than others:

Wilton had a few no-so-choice words for Kik Messenger.

It’s similar to Facebook with videos, text and photographs, but Facebook users accept friend requests, he said. Users of the Canada-based Kik Messenger make up fake accounts pretending to be kids so they can connect with youngsters, with the app pairing up users with similar interests on its own.

“It does it for you,” Wilton said, with numerous “friends” created for a user.

Other apps are less known.

One particularly dangerous app is chatroulette.

In fact, Wilton stressed there is no reason any kid — or adult, for that matter — should be on chatroulette where the online roulette wheel stops randomly on a live video.

“Nothing good on there, and it’s inundated with men looking for girls,” he said.

On Askfm, users ask questions of other users.

Obviously, that’s not the website for an insecure young girl.

Another rampant problem is sexting, which usually takes place with “the popular kids,” Wilton said. Sexting occurs when a compromising photo, for example, is sent from one person to another.

Unfortunately, that photo can go viral.

A woman in the audience asked if kids with that type of photo on their cell phones or computers could get in trouble.

Under federal law, anyone possessing a sexually explicit photo of someone under age 18 would be guilty of child pornography, he said.

Wilton also talked about calculator apps, which are discreet lock systems with codes. Photos meant to be kept private and not seen by a parent are moved to that app.

Wilton said phones typically have calculators, but a kid having two on a phone is a red flag.

“Why does a kid want an extra calculator, really?” Wilton said.

So, how does a parent break into the app without a pass code? One way, he said, is to power off the phone, wait 10 seconds and then power on the phone. Most phones will put the private pictures in the regular cache.

Wilton also discussed sextortion, which is similar to extortion in that the predator threatens to send compromising photos to a victim’s parents, for example, unless the victim sends the predator more.

Child pornography, unfortunately, can be lucrative.

“They’re not collectors for nothing,” Wilton said of the predators.

What alarms the youngster, he said, is the fear of the parents taking away the phone if they find out about the photos. And kids losing their phones, in their eyes, is devastating for them.

Wilton told the Negaunee parents about the “gold ticket.”

Whenever they decide to have a talk with their children about the dangers of social media, they should tell them not to send an explicit photo. However, they also should say they’ll get that gold ticket — a first-time only “pass” — if they bring up a transgression immediately, and tell them:

“I won’t take your phone. You won’t get in any trouble.”

The reasoning behind this tactic is if the parents take the fear of losing their phones out of their kids’ heads, they will own up to the problem, he said.

Wilton had this piece of advice for kids: “Set your stuff to private, and don’t ever talk to somebody you’ve never physically seen, and you’ll never have a problem.”