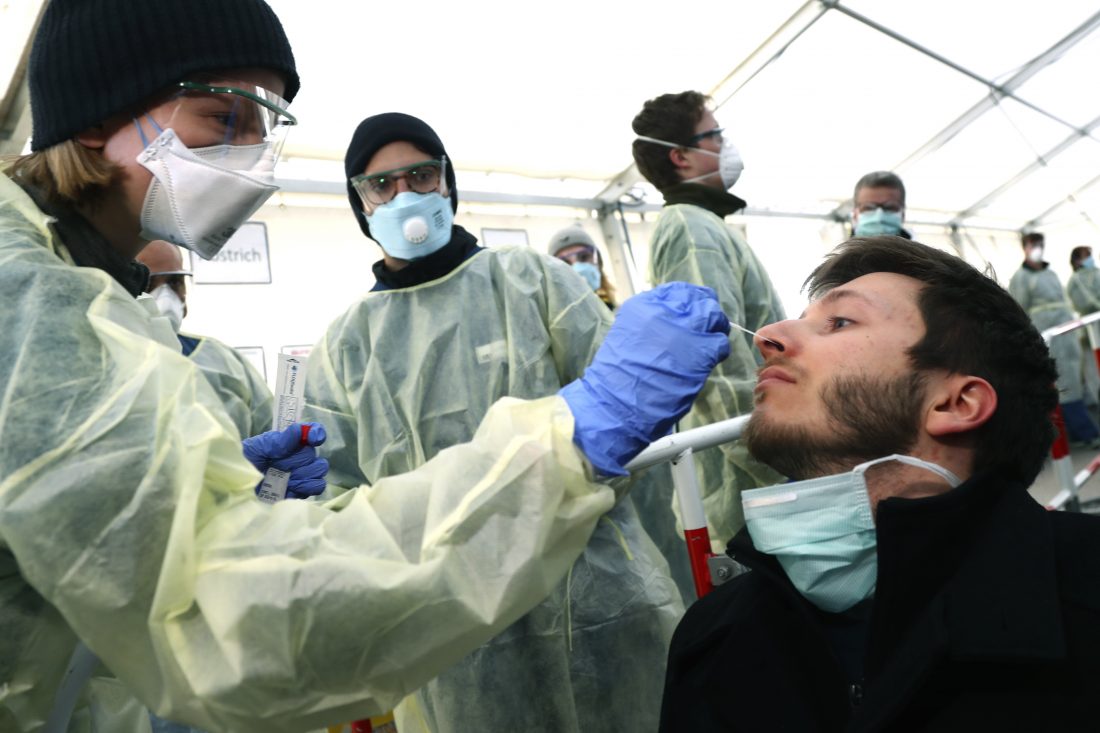 In this March 23 photo, medical employees demonstrate testing, at a coronavirus test center for public service employees, during a media presentation in Munich, Germany. Labs were quick to ramp up their testing capacity and now experts say up to 500,000 tests can be conducted in Germany per week. That quick work, coupled with the country's large number of intensive care unit beds and its early implementation of social distancing measures, could be behind Germany’s relatively low death toll. (AP photo)

BERLIN — Late last year — long before most people had heard of the new coronavirus now sweeping the globe — scientists in Germany sprang into action to develop a test for the virus that was causing an unusual respiratory disease in central China.

They had one by mid-January — and labs around the country were ready to start using it just weeks later, around the same time that Europe’s most populous country registered its first case.

“It was clear that if the epidemic swept over here from China, then we had to start testing,” said Hendrik Borucki, a spokesman for Bioscientia Healthcare, which operates 19 labs in Germany.

That quick work stands in stark contrast to delays and missteps in other countries. Coupled with Germany’s large number of intensive care beds and its early social distancing measures, it could explain one of the most interesting puzzles of the COVID-19 pandemic: Why are people with the virus in Germany currently dying at much lower rates than in neighboring countries?

The numbers are remarkable: As confirmed cases in Germany passed 71,000, the death toll today was 775, according to a tally kept by Johns Hopkins University. In contrast, Italy has reported almost 106,000 infections and more than 12,400 deaths, while Spain has more than 102,000 cases with over 9,000 deaths.

France has four times as many virus deaths as Germany and Britain has twice as many, even though both countries have fewer reported infections.

There may be many factors at play, but experts said early on that fast and widespread testing gave Germany an edge.

“The reason why we in Germany have so few deaths at the moment compared to the number of infected can be largely explained by the fact that we are doing an extremely large number of lab diagnoses,” said virologist Dr. Christian Drosten, whose team developed the first test for the new virus at Berlin’s Charity hospital — established over 300 years ago to treat plague victims.

He estimated that Germany is now capable of conducting up to 500,000 tests a week.

Early access to the test from Drosten’s team is only part of the reason for Germany’s head start. Before the country even registered its first case, authorities agreed the tests would be covered by its universal insurance system, and be available to everyone with symptoms and either recent travel to virus hotspots or close contact with a confirmed case.

Still, Germany may not be as much of an anomaly as it seems. The fact that Spain and Italy — which have seen much more intense outbreaks — are doing fewer tests indicates they are missing many mild or asymptomatic cases.