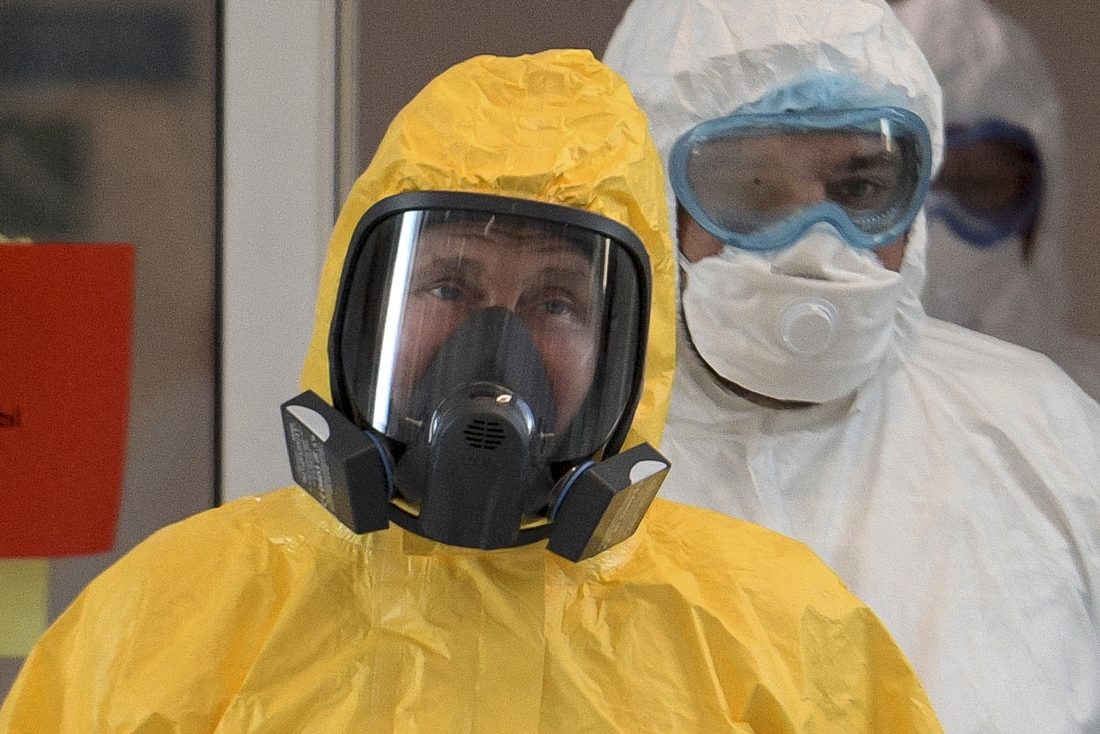 In this March 24 photo, Russian President Vladimir Putin wearing a protective suit enters a hall during his visit to the hospital for coronavirus patients in Kommunarka, outside Moscow, Russia. Russian authorities declared a war on “fake news” related to the new coronavirus. The crusade was triggered by what looked like a real disinformation campaign, but as the outbreak in Russia picked up speed and criticism of the Kremlin’s “it is under control” stance mounted, the authorities cracked down on social media users doubting the official numbers and news outlets questioning the government’s response to the epidemic. (AP photo)

MOSCOW — Two weeks ago, an opposition-leaning radio station in Russia interviewed political analyst Valery Solovei, who alleged the government was lying when it said no one had died in the country from the coronavirus.

Solovei told radio station Echo Moskvy at least 1,600 people might have died since mid-January. Russia’s media and internet watchdog, Roscomnadzor, quickly pressured the station to delete the interview from its website.

The demand was part of a widespread government campaign against what authorities called “fake news” about the pandemic.

On Tuesday, Russian lawmakers began putting some teeth behind the campaign, approving fines of up to $25,000 and prison terms of up to five years for anyone who spreads what is deemed to be false information. Media outlets will be fined up to $127,000 if they disseminate disinformation about the outbreak.

Lawmakers rushed the bill through all three readings in just one day after President Vladimir Putin spoke about the need to counter “provocations, stupid gossip and malicious lies” about the outbreak.

The crusade began about a month ago, when Russia’s caseload was still in the single digits. The Kremlin’s stance of “everything is under control” prompted speculation that authorities might be hiding or underreporting the scale of the outbreak in line with Soviet-era traditions of covering up embarrassing truths.

A broad set of measures was outlined and a special “fake news” division in the government’s coronavirus task force was created. A group within Russia’s Investigative Committee was put together to chase down alleged disinformation.

Social media users who doubted the official numbers and news outlets questioning the government response became targets for law enforcement seeking to weed out anything that didn’t correspond with the official data.