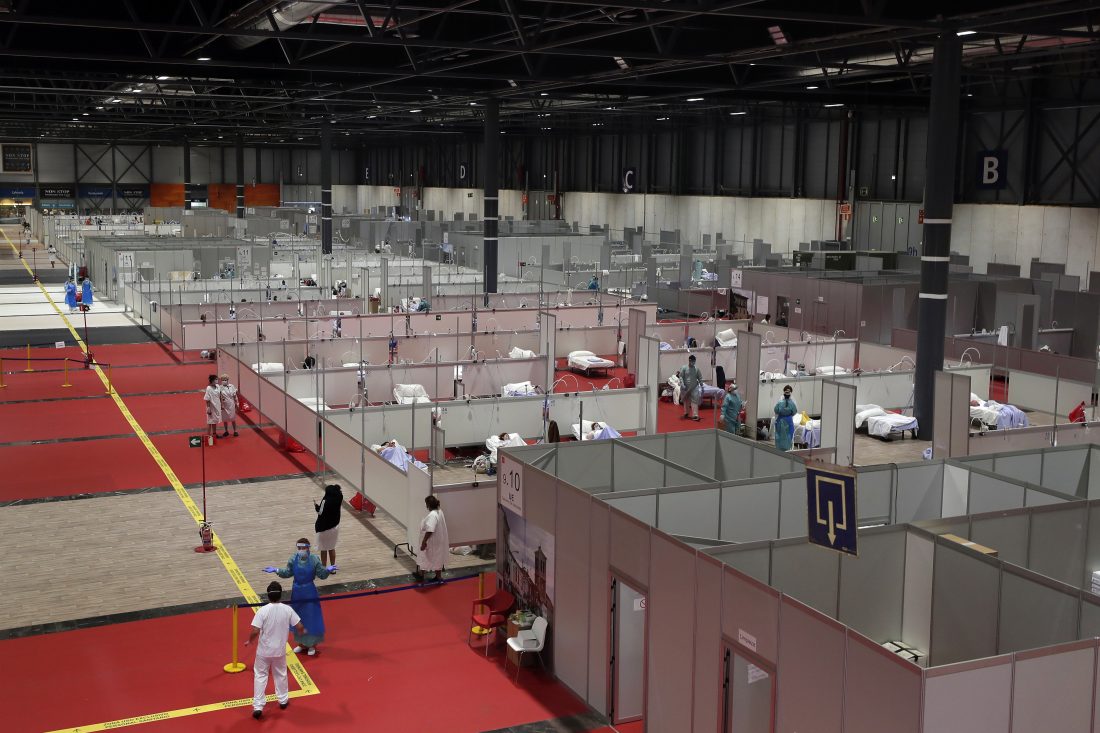 A general view a temporary field hospital set at Ifema convention and exhibition of in Madrid, Spain, Thursday, April 2, 2020. The new coronavirus causes mild or moderate symptoms for most people, but for some, especially older adults and people with existing health problems, it can cause more severe illness or death. (AP Photo/Manu Fernandez)

A maelstrom of coronavirus deaths and job losses slammed the United States and Europe. Some 10 million Americans have been thrown out of work in just two weeks, the most stunning collapse the U.S. job market has ever witnessed. Global confirmed infections surged past 1 million and deaths hit 53,000, according to a tally by Johns Hopkins University.

Experts say both numbers are seriously under-counted, due to the lack of testing, mild cases that were missed and governments that are deliberately underplaying the impact of the pandemic.

Europe’s three worst-hit countries — Italy, Spain and France — surpassed 30,000 dead, over 56% of the world’s death toll. From those countries, the view remained almost unrelentingly grim, a frightening portent even for places like New York, the epicenter of the U.S. outbreak, where trucks have been fork-lifting bodies outside overflowing morgues.

One Spanish hospital turned its library into a makeshift intensive-care unit. In France, space was being set aside for bodies in a vast food market. The French prime minister said he is “fighting hour by hour” to ward off shortages of essential drugs used to keep COVID-19 patients alive in intensive care.

Philippe Montravers, an anesthesiologist in Paris, said medics are preparing to fall back on older drugs, such as the opiates fetanyl and morphine, that had fallen out of favor, as newer painkillers are now in short supply.

“The work is extremely tough and heavy,” he said. “We’ve had doctors, nurses, caregivers who got sick, infected … but who have come back after recovering. It’s a bit like those World War I soldiers who were injured and came back to fight.”

Some glimmers of hope emerged that Italy, with nearly 14,000 dead, Spain and France might be flattening their infection curves and nearing or even past their peaks in daily deaths.

Spain today reported 932 new daily deaths, just slightly down from the record it hit a day earlier. The carnage most certainly included large numbers of elderly people who authorities admit are not getting access to the country’s limited breathing machines, which are being used first on healthier, younger patients. More than half of Spain’s 10,935 deaths have come in the last seven days alone.

Some European officials are tentatively talking about the future, how to lift the nationwide lockdowns that have staved off the total collapse of strained health systems. Still, the main message across the continent was “stay at home.”

In France, the government warned Parisians not to even think about going anywhere for the Easter school vacation starting this weekend, setting up roadblocks out of the city to nab those with antsy children trying to escape lockdowns.

Beyond Europe, coronavirus deaths mounted with alarming speed in New York, the most lethal hot spot in the United States, which has seen at least 1,500 virus deaths. One New York funeral home had 185 bodies stacked up — more than triple its normal capacity.