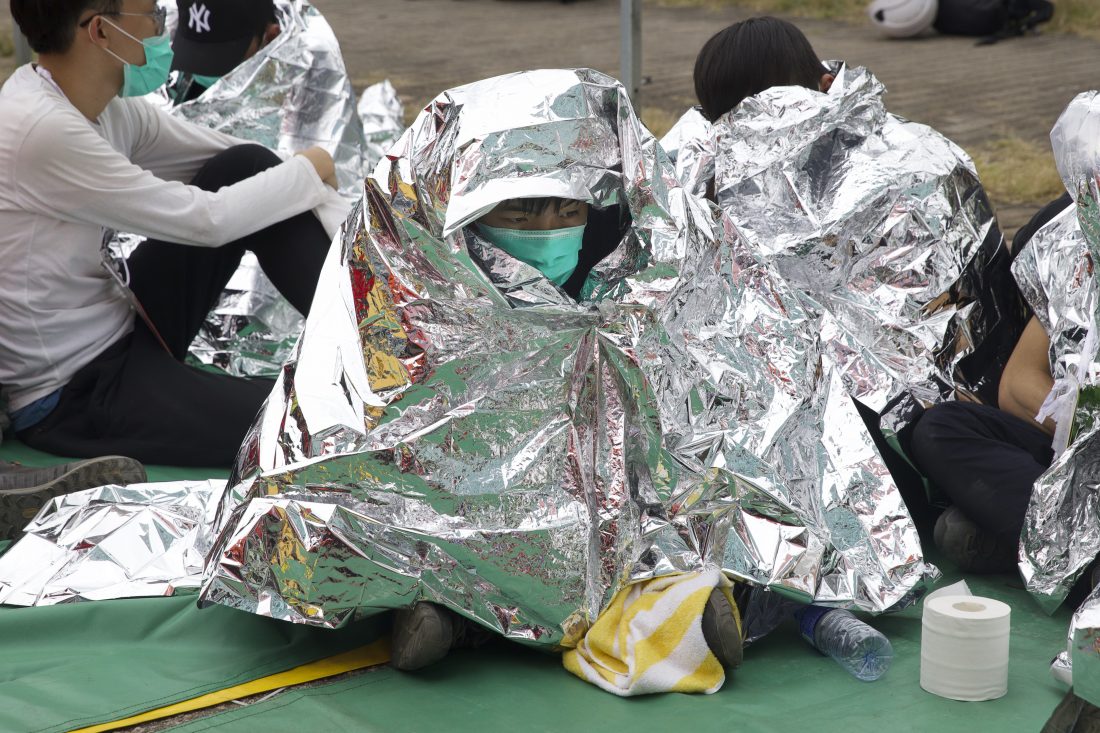 An injured youth sits under a space blanket at a casualty evacuation point near Hong Kong Polytechnic University in Hong Kong, Tuesday, Nov. 19, 2019. About 100 anti-government protesters remained holed up at a Hong Kong university Tuesday as a police siege of the campus entered its third day. (AP Photo/Ng Han Guan)

HONG KONG (AP) — About 100 anti-government protesters remained holed up at a Hong Kong university today, unsure what to do next as food supplies dwindled and a police siege of the campus entered its third day.

City leader Carrie Lam said 600 people had left the Hong Kong Polytechnic campus, including 200 who are under 18 years old.

Police have surrounded the university and are arresting anyone who leaves. Groups of protesters made several attempts to escape Monday, including sliding down hoses to waiting motorcycles, but it wasn’t clear if they evaded arrest.

Lam said those under 18 would not be immediately arrested but could face charges later. She said the other 400 who have left have been arrested.

“We will use whatever means to continue to persuade and arrange for these remaining protesters to leave the campus as soon as possible so that this whole operation could end in a peaceful manner,” she said after a weekly meeting with advisers.

After five months, the Hong Kong protest movement has steadily intensified as local and Beijing authorities harden their positions and refuse to make concessions. China took control of the former British colony in 1997 promising to let it retain considerable autonomy, but the protest movement was fueled by the belief those freedoms are being eroded.

Universities became the latest battleground last week, as protesters occupied several campuses, using gasoline bombs and bows and arrows to fend off riot police backed by armored cars and water cannon. Those at Polytechnic are the last holdouts.

One protester, who would not appear on camera, said he had no plan and is waiting for someone to come to help. Another said he wants to leave safely but without being charged.

They would not give their full names out of fear of arrest.

Protesters milled about in small groups. Family members and teachers arrived sporadically to pick up those under 18, hugging their children before walking back to a police checkpoint, where officers recorded names and other information before letting them go.

WHO: Indoor airborne spread of coronavirus a possibility

LONDON (AP) — The World Health Organization is acknowledging the possibility that COVID-19 might be spread in the ...

Violence at rally in Greece against new law

ATHENS, Greece (AP) — Violence has broken out in Athens during a mass demonstration against plans to curb public ...

BELGRADE, Serbia (AP) — Serbian authorities on Thursday banned gatherings of more than 10 people in the capital, ...