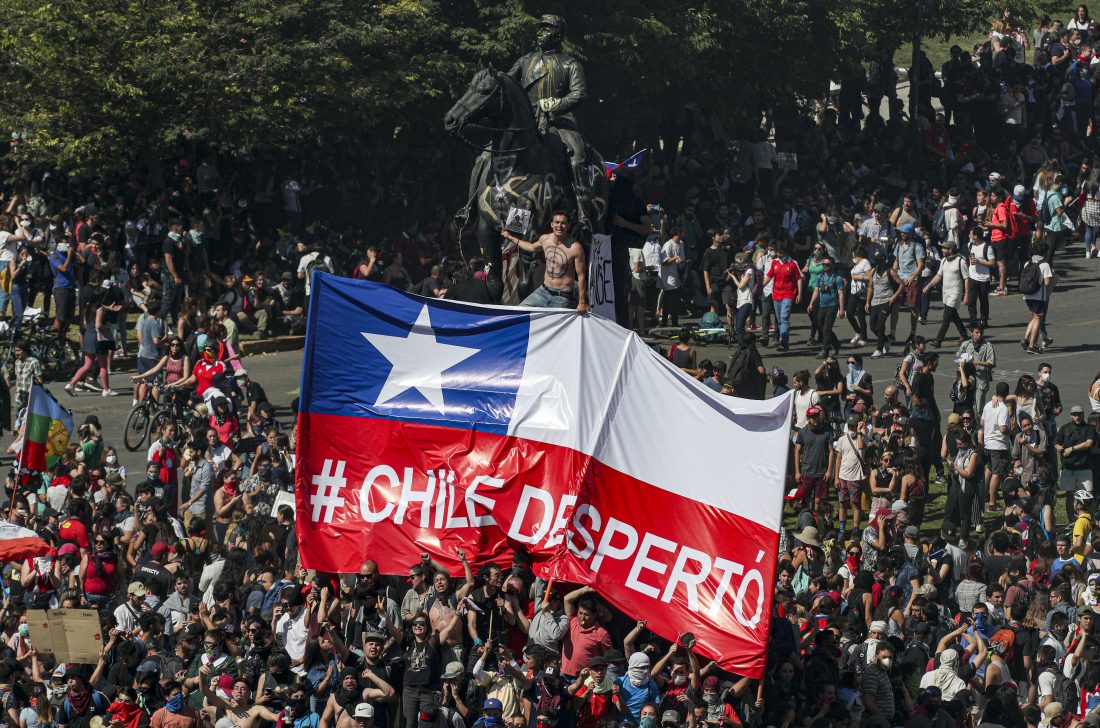 Anti-government demonstrators protest below a Chilean flag with the words "Chile Woke Up" in Spanish, during a protest in Santiago, Chile, Tuesday, Oct. 22, 2019. Chile has been facing days of unrest, triggered by a relatively minor increase in subway fares. The protests have shaken a nation noted for economic stability over the past decades, which has seen steadily declining poverty despite persistent high rates of inequality. (AP Photo/Esteban Felix)

SANTIAGO, Chile (AP) — Rioting, arson attacks and violent clashes wracked Chile for a fifth day Tuesday, as the government raised the death toll to 15 in an upheaval that has almost paralyzed the South American country long seen as the region’s oasis of stability.

President Sebastián Piñera announced a program Tuesday night calling for modest boosts to the lowest incomes and increased taxes on the wealthiest as he sought to calm anger in the streets.

About half of Chile’s 16 regions remained under an emergency decree and some were a under military curfew, the first — other than for natural disasters — imposed since the country returned to democracy in 1990 following a bloody 17-year dictatorship.

Unrest sparked last week when a relatively minor, less-than-4% rise in subway fares led to students jumping station turnstiles in protest. But the defiance exploded into violence Friday with demonstrators setting fire to subway stations, buses and a high-rise building. Demonstrations escalated with wide-ranging demands for improvements in education, health care and wages, and spread nationwide, fueled by frustration among many Chileans who feel they have not shared in the economic advances in one of Latin America’s wealthiest nations.

“I fight so that all that will end and so that all of us will have something fair,” said one protester, José Tomás López, a cook.

He said he took to the streets “because I’ve seen how my mother lives, with a salary of not more than ($700 a month) to maintain my three siblings, and I know her debts and all her efforts to meet them.”

Riot police used tear gas and water cannons Tuesday to break up marches by rock-throwing demonstrators in several parts of Santiago, while soldiers and police guarded other Chileans who formed long lines at supermarkets.

“I’ve walked several kilometers searching for milk, but the supermarkets remain closed and neighborhood stores have run out,” said Carmen Fuentealba, a retiree.

Many stores, subway stations and banks were burned, damaged or looted during protests over the weekend, and some people have reported problems getting cash at ATMs.

“It’s enough with this,” said store owner Fernando García. “They want to destroy it all. I don’t sleep at night because I fear that they’ll loot.”

Shortly before the rioting broke out last week, Chile’s conservative president boasted in an interview with The Financial Times that Chile “looks like an oasis” in the region because it has a stable democracy and a balanced and growing economy that has been creating jobs and improving pay.

But the wealth is unevenly spread, with one of the region’s highest rates of inequality. Many Chilean families earn $550 to $700 a month and pensions can be as low as $159.

“It’s indispensable that they lower the price of medications because there’s no salary that can hold up to this,” said Hernán Pavéz, a retired teacher.

Long lines of cars also continued to snake from gas stations as drivers worried about supplies in a country that imports nearly all its gasoline.

BAGHDAD (AP) — A leading Iraqi expert on the Islamic State and other militant groups was shot dead in Baghdad on ...

JERUSALEM (AP) — Israel said it successfully launched a new spy satellite into space on Monday as its leaders ... 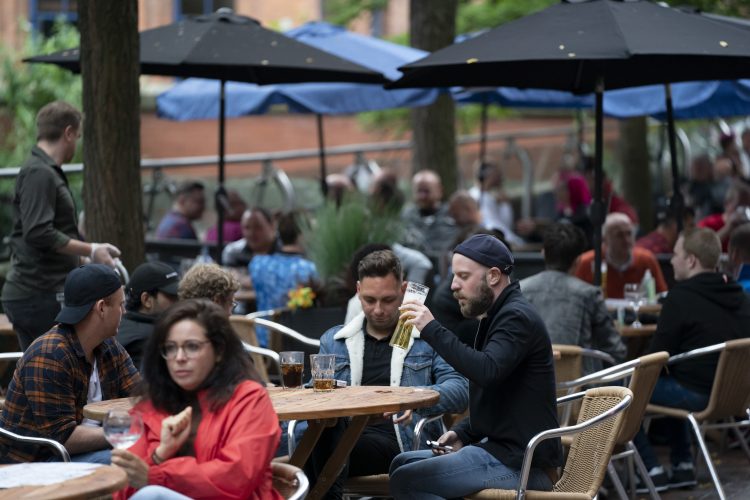