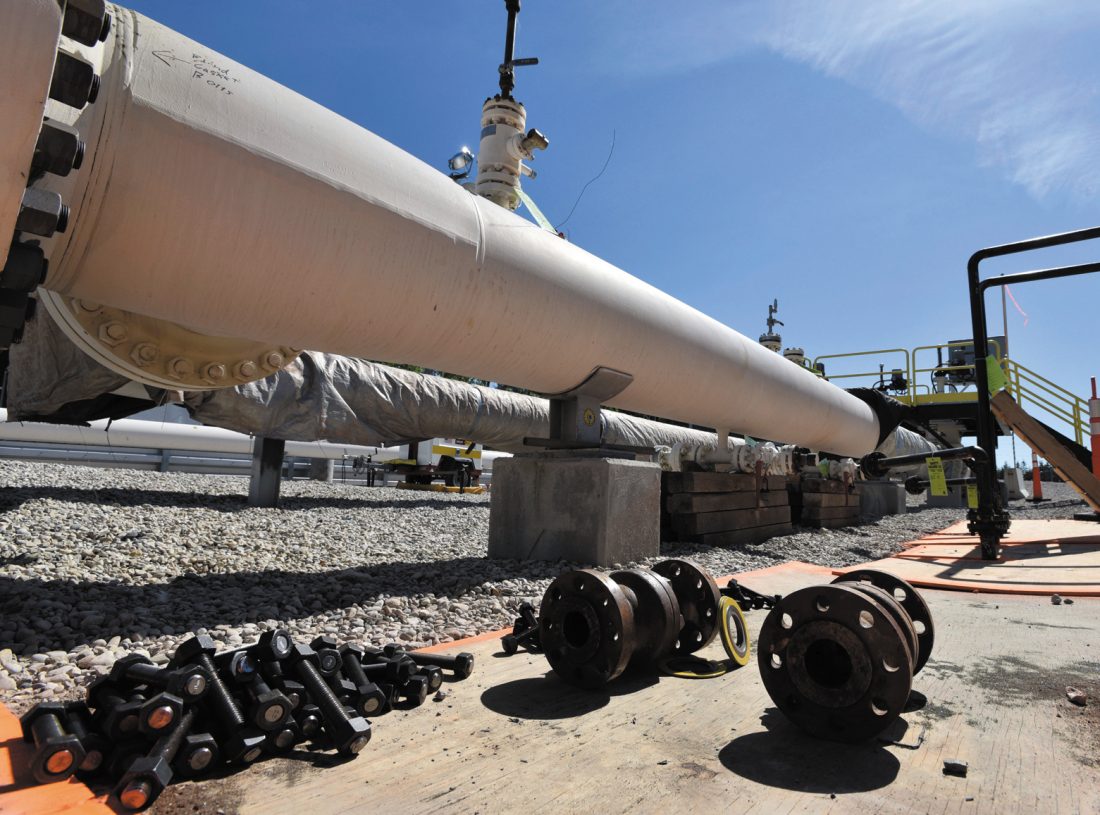 Fresh nuts, bolts and fittings are ready to be added to the east leg of the Enbridge Line 5 pipeline near St. Ignace several years ago. (AP file photo)

DETROIT — A judge shut down an energy pipeline in Michigan’s Great Lakes on Thursday, granting a request from the state after the owner reported problems with a support piece far below the surface.

Enbridge Inc. has not provided enough information to Michigan officials to show that continued operation of the west leg of the Line 5 twin pipeline is safe, Ingham County Judge James Jamo said.

Without the temporary order, “the risk of harm to the Great Lakes and various communities and businesses that rely on the Great Lakes would be not only substantial but also in some respects irreparable,” the judge said.

Enbridge, a Canadian company based in Calgary, Alberta, said it was disappointed with the decision but quickly complied by closing the west leg.

Vern Yu, executive vice president and president of Liquids Pipelines said, “Enbridge is disappointed in the court’s ruling as we believe that Life 5 is safe; however, the west leg of Line 5 has been shut down.”

Enbridge’s Line 5 carries oil and natural gas liquids from Superior, Wisconsin, to Sarnia, Ontario. A four-mile (6.4-kilometer) segment divides into two pipes that lie on the bottom of the Straits of Mackinac, which connect Lake Huron and Lake Michigan.

Enbridge last week said an anchor support on the east leg of the pipeline had shifted. The company said Line 5 itself was not ruptured and that no oil spilled into the water, but it still hasn’t explained how the incident occurred.

The east leg was shut down. But Enbridge said it resumed the flow through the west line Saturday after consulting with federal regulators at the U.S. Pipeline and Hazardous Materials Safety Administration.

The judge said he’ll hold a hearing Tuesday on the state’s request for a preliminary injunction that, if granted, could keep Line 5 closed indefinitely.

“With the continued operation of this pipeline, the risk of severe and lasting environmental damage to Michigan’s most important natural resource continues to grow every day,” Attorney General Dana Nessel said.

Line 5 transports up to 540,000 barrels per day of light crude oil, light synthetic crude and natural gas liquids, which are refined into propane, according to Enbridge. The pipeline has been operating since 1953.

Enbridge warned that a long shutdown would threaten fuel supplies in Michigan and Ohio and possibly cause higher gas prices.

Gov. Gretchen Whitmer criticized the restart of the west leg of Line 5, calling it a “brazen disregard for the people of Michigan” and the safety of the Great Lakes.

Enbridge wants to ultimately put the twin pipes in a tunnel to protect them in the lakes. The project was approved in 2018 by a Republican administration before Nessel and Whitmer, both Democrats, took office.

Nessel requested the restraining order and preliminary injunction as part of a broader lawsuit filed in 2019 to permanently close Line 5. The litigation is ongoing.