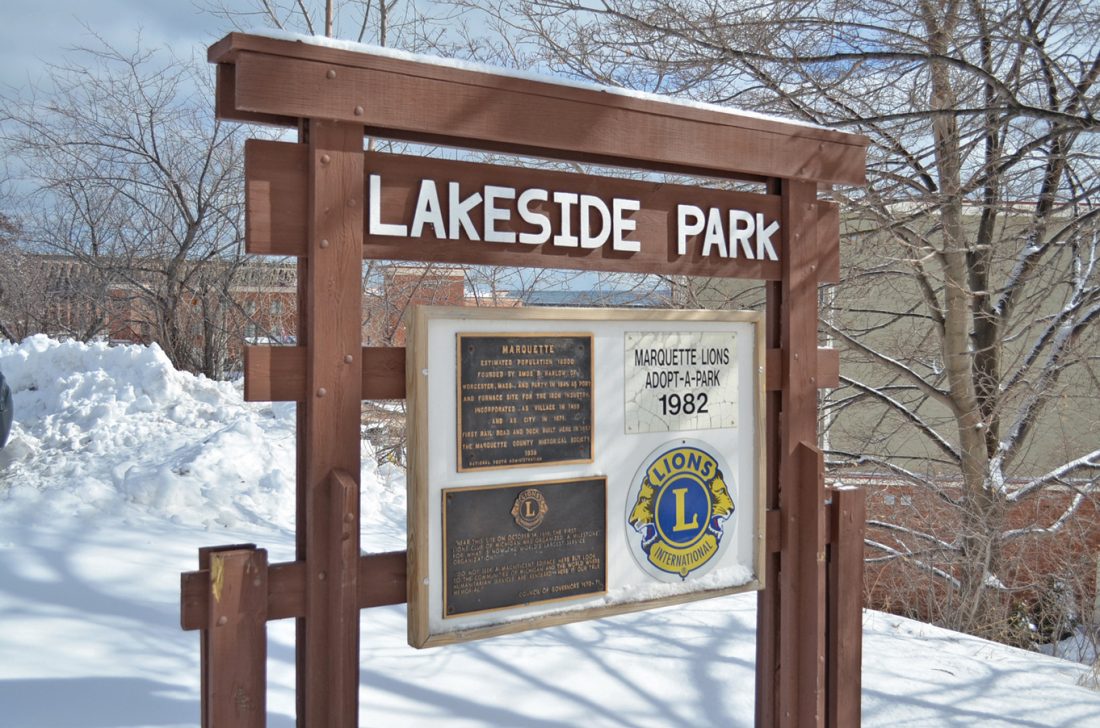 MARQUETTE — Parks are scattered throughout Marquette County, preserving elements of both nature and history.

In the city of Marquette, an organization is looking to preserve a small park with the hope of acquiring public and city support.

The Marquette Lions Club is hoping to restore the view of the lake at Lakeside Park, which is a small park located on the south side of the Lake Superior Community Partnership building along South Front Street.

Currently, the group is working with the Marquette Parks and Recreation Department and city arborist Dan Carter to begin proposing plans on what can be done in that park.

If those plans are approved, the group’s proposal will then go to Marquette City Commission, said Mary Rule, chair of the Marquette Lions Lakeside Project.

“It’s the first space that people see when they come into Marquette on the right-hand side,” Rule said. “We’ve been meeting with architects around town to plan a new sign to put up in that new area, to help us plan gardens and design the space. All of that is going to need money to do it and we are happy to spearhead the project, but we are going to be needing public support to help bring that around.”

Working with other organizations such as the Marquette Arts and Culture Center and the Marquette Beautification and Restoration Committee Inc., the Marquette Lions Club wants to make the park an eye-pleasing and “welcoming place,” Rule said, adding that pruning and thinning the brush and trees from the area that overlooks Lake Superior is part of what’s in store if plans are approved.

Marquette Director of Community Services Jon Swenson has been working with the Marquette Lions Club over the past year. The timing for the improvements of the proposed plans — landscaping, pruning and thinning of overgrown understory — all depend on funding and would require city approval, he said.

“The Lions are looking to raise some funds for items such as a new sign for the park, updated information boards, a new larger U.S. flag, along with the Lions flag for the pole, and some connectivity to the Father Marquette Park updates,” Swenson said. “The park location is such that it may have a strong impression on people entering the downtown area, if it were to be improved along the lines of what is being discussed.”

On Oct. 14, 1919, Lakeside Park was where the first official Marquette Lions Club meeting took place. The Marquette club was the first registered Lions Club in the state of Michigan, Rule said.

This project is important not only because of its historical context, but also because it’s one of the first spots that welcomes people into the city, Rule said.

Until the Marquette Lions Club configures its preliminary plans with the Marquette Parks and Recreation Department, the group is trying to spread awareness of why this project is important for the community, Rule said.

“With all the development that’s going on in that area, holding onto these little spaces (is important),” she said. “There’s the Pocket Park right downtown — we’ve got the Phil (Niemisto) statue sitting right on the park — we’ve got the Father Marquette statue right there on the corner and then we have this historical site for the Marquette Lions Club. So it all kind of links together and we hope to continue to keep Marquette interesting for those who visit and those who live here and protect these valuable spaces.”