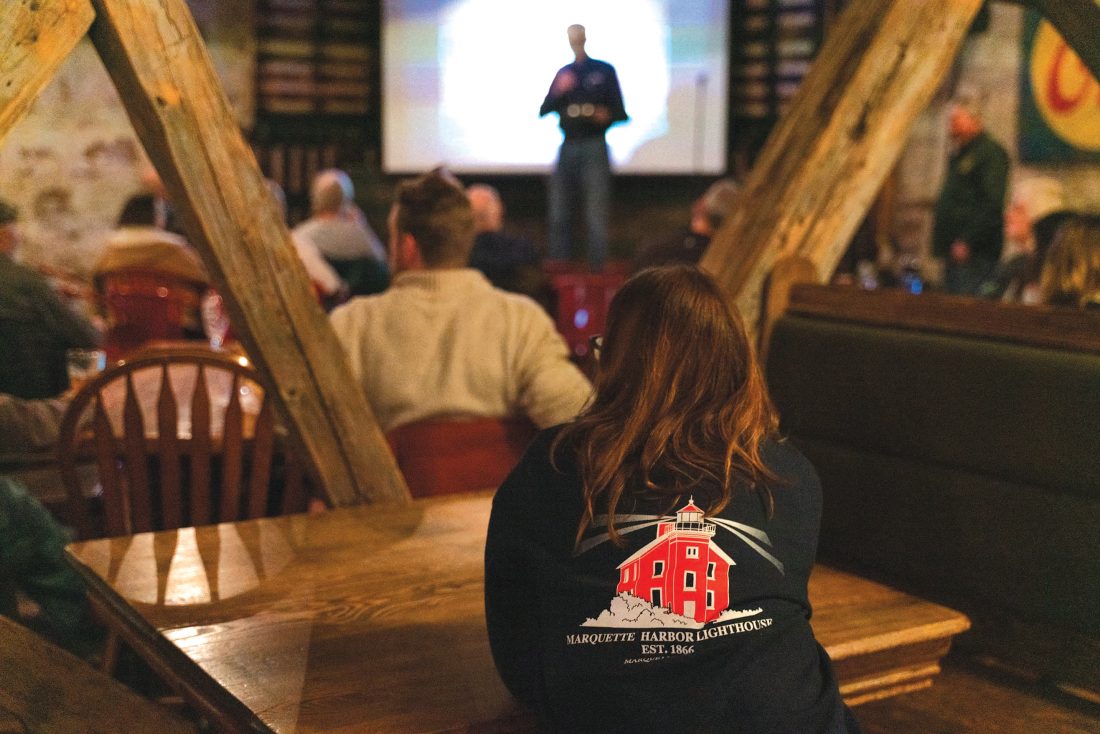 MARQUETTE — Lighthouse beacons have been used practically and metaphorically as tools for navigating safely through dark and difficult waters for centuries.

But how often is the technology that makes these structures function considered?

Fosburg, who is also vice president of the Marquette Maritime Museum’s board of directors, discussed the history and function of Fresnel lighthouse lenses and equipment, as well as his experiences working on the lens pedestal he built for the major motion picture, “The Lighthouse,” starring Willem Dafoe and Robert Pattinson.

The critically acclaimed film won best in show at the Cannes Film Festival last year and put a spotlight on the Fresnel lens for a modern audience.

“Well, first of all, everybody loves lighthouses,” Fosburg said. “But this is not a talk about lighthouses. And lighthouses are really cool. They’re beautiful. They’re very photogenic. We all enjoy them. But there was only one reason for that structure. That structure was only there for that little glass room on the top called the lantern room.”

In its purest form, there are only three parts to a lighthouse, the tower, the lens and the lamp, Fosburg said. While lighthouse keepers worked around the clock to maintain the tower, keep the lamp lit and clean the glass, it was the job of the lampist to install and repair the lens.

“A lampist is the term — it’s an old-world term — for the individual who used to travel to the lighthouses to work on the Fresnel lenses,” Fosburg said.

While his profession was a fairly common trade in the 1800s, Fosburg is currently one of only five other lampists in the United States. He specializes in restoring, moving, cleaning and interpreting original classical Fresnel lighthouse lenses and their components.

The Fresnel lens was developed by Frenchman Augustine Fresnel in the early 1800s. The lens is made up of a series of concentric rings that resemble ripples on the water’s surface. Each ring is placed at a specific angle to focus scattered rays of light emitted from a lamp source into one concentrated narrow beam. The tighter the beam, the longer the distance the light can be seen.

“They are actually quite simple — they focus the light,” Fosburg said.

Lenses come in six sizes called “orders.” The fifth-order Fresnel lens was the most commonly used Fresnel on the Great Lakes and was used as a breakwater light for boats coming into a harbor.

The largest lens used on the Great Lakes was a second-order lens. An example of this can be found on display at the Marquette Maritime Museum, as it hosts a 6-foot by 8-foot second-order lens from the Stannard Rock Lighthouse.

In 1895, a 14-inch glass and copper valve called the sun valve was invented and made the lighthouse keeper’s job obsolete by automating the lamp fueling process.

With the advent of electricity and other advancements in technology, Fresnel lenses were replaced by more durable materials.

Fosburg said that these fragile, delicate objects were “in a world that was moving a lot quicker than they were.”

With the advent of GPS technology, the lighthouse may no longer be necessary.

However, Fosburg believes that they still serve a purpose by bringing solace to mariners.

“So a lighthouse is comforting, just knowing that they’re going to leave the light for you,” he said. “You’re coming back into port in the storm is approaching: You to want to get in the soon as you can, you got to head for sure and wait out for a better day.”

The Marquette Maritime Museum’s winter lecture series, Maritime History on Tap, is held at 7 p.m. the first Tuesday of the month November through April at the Ore Dock Brewing Co. along Spring Street in Marquette. There is a $5 suggested donation at the door.

For more information on the upcoming events, visit mqtmaritimemuseum.com.