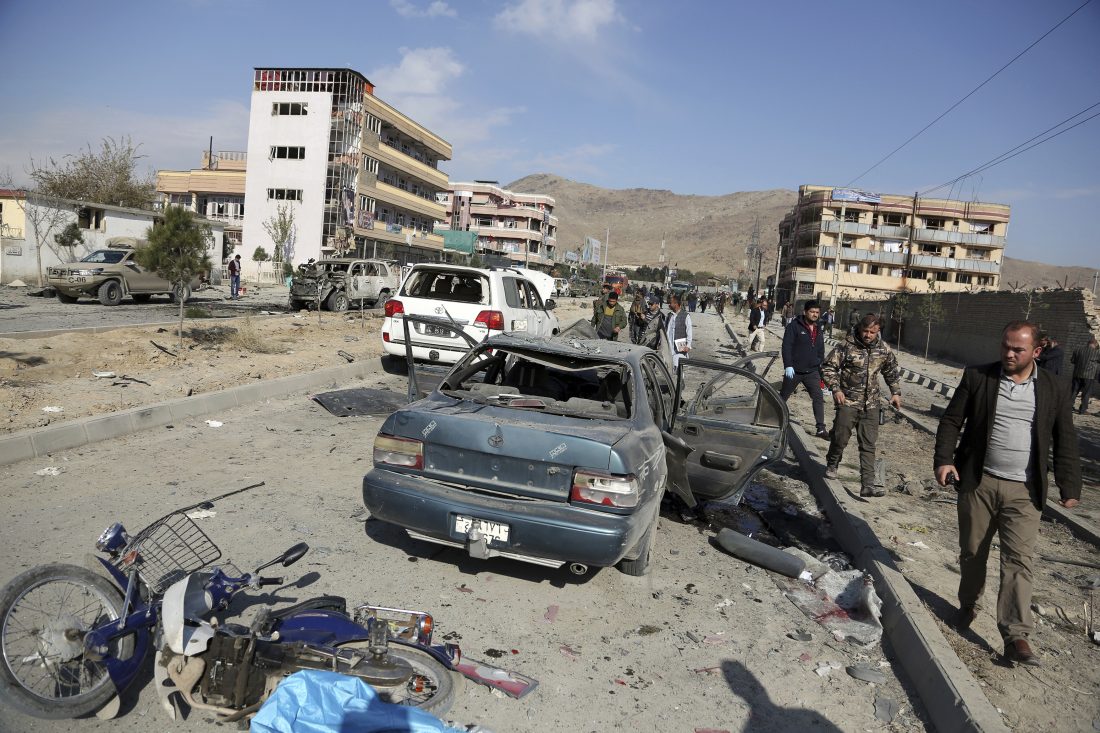 In this Nov. 13 file photo, Afghan security personnel gather at the site of a car bomb attack in Kabul, Afghanistan. Afghanistan will need vast amounts of foreign funding to keep its government afloat through 2024, a U.S. agency said Thursday, even as foreign donors are increasingly angry over the cost of debilitating corruption and the U.S. seeks a peace deal with Taliban to withdraw its troops. (AP photo/Rahmat Gul, File)

ISLAMABAD — The countdown to the signing of a peace agreement between the Taliban and the United States to end the 18 years of war in Afghanistan will begin tonight, when the seven-day “reduction of violence” promised by the Taliban will go into effect, a senior U.S. State Department official said. The deal will be signed on Feb. 29.

The official did not specify the exact hour when the reduction of violence will commence. He spoke on condition of anonymity to discuss the deal and its details.

After the seven-day reduction of violence, the long sought-after peace agreement between the U.S. and the Taliban will be signed in Doha, Qatar, paving the way for a withdrawal of U.S. troops and intra-Afghan negotiations, the official told The Associated Press. The Taliban had set up and maintained a political office in Doha in recent years, following the 2001 U.S.-led invasion that toppled their regime, which had harbored al-Qaida leader Osama bin Laden, in Afghanistan.

U.S. Secretary of State Mike Pompeo said the peace agreement will also lead to an eventual permanent cease-fire. The deal also envisions guarantees from the Taliban that Afghanistan will not be used to attack the U.S. or its allies. It provides for the phased withdrawal of American and other foreign forces from the country over 18 months.

“We are preparing for the signing to take place on February 29,” Pompeo said in a statement issued today. “Intra-Afghan negotiations will start soon thereafter, and will build on this fundamental step to deliver a comprehensive and permanent ceasefire and the future political road map for Afghanistan.”

But the road ahead is fraught with difficulties.

“The only way to achieve a sustainable peace in Afghanistan is for Afghans to come together and agree on the way forward,” said Pompeo in his statement.

It’s still not clear who will represent Kabul at the negotiation table for the intra-Afghan talks, considered a key pillar in finding a lasting peace in the war-torn country. The Afghan election commission earlier this week declared President Ashraf Ghani the winner of the presidential elections held in September but his rivals quickly denounced his win.

The Taliban have refused to talk to Ghani’s government and also denounced the election results, saying they will talk to government representatives but only as ordinary Afghans.

Pompeo’s statement did not say who would represent Kabul but only that “‘intra-Afghan negotiations will start soon’ after the signing in Doha ‘and will build on this fundamental step to deliver a comprehensive and permanent cease-fire and the future political road map for Afghanistan.'”

Germany and Norway have both offered to host the intra-Afghan talks but no venue has yet been set. There was also no immediate comment from President Ghani.

The Taliban issued its own statement today on the reduction of violence deal.

“Both parties will now create a suitable security situation in advance of agreement signing date, extend invitations to senior representatives of numerous countries and organizations to participate in the signing ceremony, make arrangements for the release of prisoners, structure a path for intra-Afghan negotiations with various political parties of the country and finally lay the groundwork for peace across the country with the withdrawal of all foreign forces,” the Taliban statement said.

The Taliban added that they will not allow “the land of Afghanistan to be used against security of others so that our people can live a peaceful and prosperous life under the shade of an Islamic system.”

Under the terms of the ”reduction in violence,” which covers all of Afghanistan and also applies to Afghan forces, all sides have committed to end attacks for a seven-day period. For the Taliban, that includes roadside bombings, suicide attacks and rocket strikes.

U.S. peace envoy Zalmay Khalilzad, who has led the negotiations with the Taliban since September 2018, has been instrumental in the latest developments.

The peace deal also calls for the release of 5,000 Taliban prisoners, most of whom are being held in jails run by the Afghan government. Although the U.S. has already discussed the prisoner release with government representatives, there has been no public announcement about it from Ghani’s government.

If the peace deal is signed, President Donald Trump can claim to have taken a first step toward meeting his 2016 campaign pledge to withdraw American troops. But if it fails, Trump could be painted by his Democrat adversaries as being naive and willing to sacrifice the security of U.S. soldiers and interests for the sake of political expediency.

The Pentagon has declined to say whether the U.S. had agreed to cut its troop levels in Afghanistan to zero. Defense Secretary Mark Esper has said if the seven-day truce is successful and the Afghan peace talks begins, the U.S. would reduce its troop contingent “over time” to about 8,600. There currently are about 12,000 U.S. troops in the country. During any withdrawal, the U.S. would retain the right to continue counter-terrorism operations in Afghanistan, which have been focused mainly on an Islamic State group’s affiliate and al-Qaida, according to Pentagon officials.

Yet the spokesman for the Taliban’s political office in Doha, Suhail Shaheen tweeted that the Taliban expect a complete withdrawal. In a Pashto language tweet, he said, “based on the agreement with the U.S., all international forces will leave Afghanistan and the invasion will end and no one will be allowed to use Afghan soil against others.”

In Brussels, NATO Secretary-General Jens Stoltenberg welcomed the developments. The U.S.-led military alliance has some 16,000 troops in Afghanistan helping to train the country’s security forces, but it could draw down on its operation to accommodate any firm peace agreement.

“This is a critical test of the Taliban’s willingness and ability to reduce violence, and contribute to peace in good faith,” Stoltenberg said in a statement. “This could pave the way for negotiations among Afghans, sustainable peace, and ensuring the country is never again a safe haven for terrorists.”

Lee reported from Washington. Associated Press writers Lorne Cook in Brussels and Lolita Baldor and Robert Burns in Washington contributed to this report.