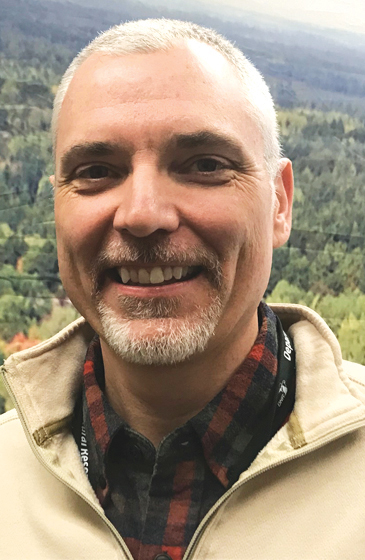 MARQUETTE — Brad Garmon, director of the state’s first-ever Michigan Office of Outdoor Recreation Industry, believes the industry can be beneficial in many ways.

Garmon visited the Michigan Department of Natural Resources Customer Service Center in Marquette on Friday to talk about the office, which was announced by Gov. Gretchen Whitmer in May. Garmon was named director in September.

The Office of Outdoor Recreation Industry works with industry partners from many sectors to anticipate emerging trends, creating effective policy and elevate outdoor recreation opportunities and resources in the state.

That, of course, includes the Upper Peninsula.

“The new Office of Outdoor Recreation Industry was created to sort of grow and support outdoor recreation economy in Michigan,” Garmon said. “I think a lot of people expect and experience up in the U.P. the tourism side of outdoor recreation, the visitation, the beautiful landscapes.

“So, there’s a whole industry that underlies that.”

That industry, he noted, includes equipment for activities such as ice climbing — and the ice axes needed for that sport can be made in Michigan.

“A lot of this job was created to sort of grow that industry, identify the companies we’ve got and support them, try to grow them, add jobs, add capacity and then maybe recruit some companies from out of state to come into Michigan and sort of work in that same space,” Garmon said.

He pointed out that the outdoor recreation industry is growing faster than the overall economy — and double in Michigan.

Garmon called the new office a “job creator” and “economic supporter,” especially for rural areas in the U.P. and northern Michigan, where factories that can make a variety of components that fit well with the outdoor recreation industry.

Most recently, Garmon served as the interim CEO of the Michigan Environmental Council in Lansing. Before that, he was the council’s director of Conservation and Emerging Issues. He also was a member of Michigan’s State Parks and Outdoor Recreation Blue Ribbon Panel in 2011.

More recently, he has advised the DNR, the Office of the Great Lakes and the Michigan Economic Development Corporation on plans to improve and support the state’s natural and cultural resources. He currently sits on the board of directors of the Michigan Mountain Biking Association and is a member of Michigan Trout Unlimited.

When the new office was created in May, DNR Director Dan Eichinger issued a statement in support of the office.

Garmon said the new office will focus on various areas, including economic development and workforce opportunities.

Outdoor recreation gets people outside, and appreciating and supporting the great assets, he said, so more people who connect with the outdoors will translate into more resources and support to protect the natural resources that make the U.P. what it is.

“If you go outside, you’re more likely to be healthy,” Garmon said.

Part of the reason Garmon was in Marquette on Friday, he said, was for “reconnaissance.”

Garmon said he wanted to find out what companies are involved in outdoor recreation work.

“A lot of times people don’t necessarily identify their company as an outdoor recreation economy company,” said Garmon, who mentioned as an example, a maker of plastic auto parts.

“So, pulling that out of the weeds and trying to find those companies and showing them the size and the growth in this industry is part of it,” Garmon said of his visit.

Garmon also had been meeting with folks from Northern Michigan University to discuss the next generation, which includes students training in a variety of recreation fields.

“It’s not just tour guides, which is an important part of it, but there’s also exercise physiology, with ultra-endurance athletes and things like that,” Garmon said.