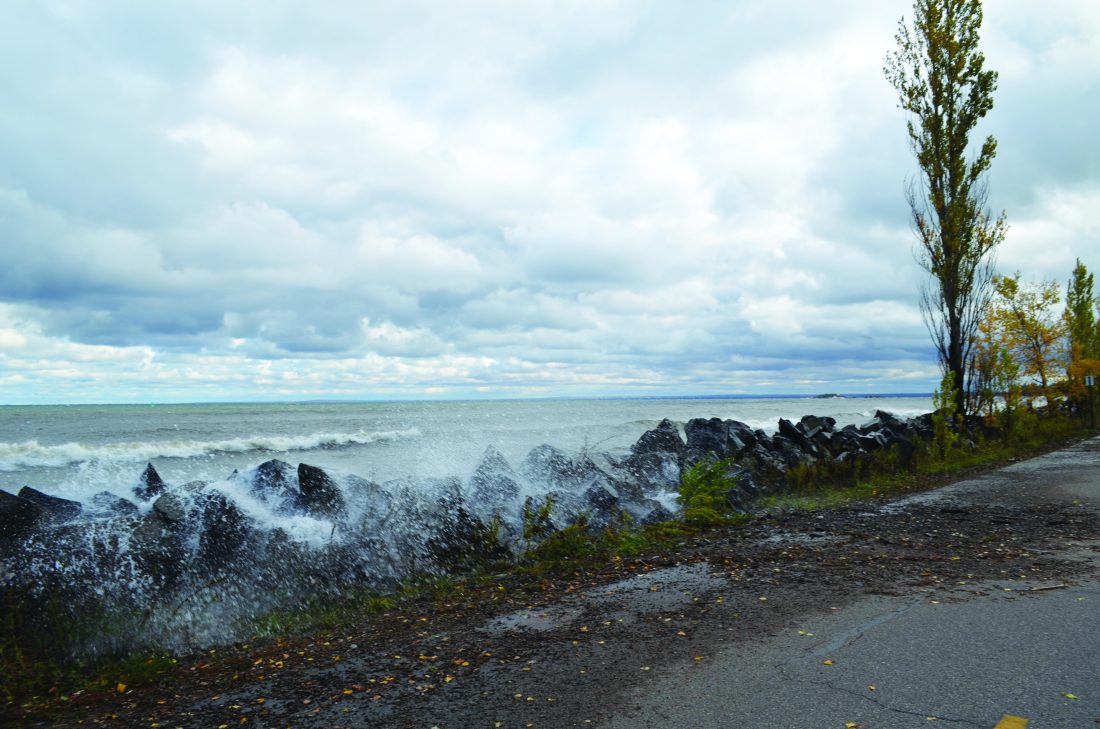 Lake Superior waves crash over rocks along the edge of Lakeshore Boulevard just south of its intersection with Hawley Street during a storm in October. Storms and high water levels on Lake Superior have caused erosion along sections of Marquette’s Lake Superior shoreline in recent months. (Journal photo by Cecilia Brown)

TRAVERSE CITY — Road damage from the overflowing Great Lakes and inland waterways may carry a whopping price tag for Michigan, with initial cost estimates for repairs and upgrades as high as $100 million, officials said Monday.

About 40 locations around the state have been significantly affected by flooding and erosion as the lakes have set record high levels in the past year, said Brad Wieferich, director of the state Department of Transportation’s development bureau. Inland lakes and streams also are full, and the ground is saturated in many places.

Roughly $5 million may be needed for immediate fixes, Wieferich said. But long-term improvements such as repairing slopes — or even rerouting sections of roadways farther away from coasts — will require considerably more.

“These things get expensive in a hurry,” Wieferich said during a news conference following a meeting of officials with five state departments and two federal agencies to coordinate strategy for dealing with the high-water problem.

He described the $100 million figure as a ìback-of-the-envelopeî estimate based on initial consultation with engineers.

Michigan’s roads are already in notoriously bad shape. Democratic Gov. Gretchen Whitmer and leaders of the Republican-led Legislature are debating how to raise funds for long-sought improvements.

Excess water could make things worse — not just near shorelines, but also in places where the ground is soaked, as the winter freeze and spring thaw create more potholes.

Farmers are suffering as well, said Gary McDowell, director of the Department of Agriculture and Rural Development. Thousands of acres of cropland were not planted last year because it was too wet, he said.

“We can’t absorb any more water. It’s like a sponge,”î McDowell said.

The government agencies formed a team that will meet regularly to coordinate their response as spring rains and melting snow send even more water into the lakes and their tributaries, said Liesl Clark, director of the Department of Environment, Great Lakes and Energy.

All five of the Great Lakes are filled to the brim, a sharp turnabout from less than a decade ago, when some were hitting record lows. The rising levels are fueled by the region’s wettest period in more than a century, which scientists say is likely connected to the warming climate.

No relief is in sight, as forecasters expect the lakes to remain high well into 2020 and perhaps longer.