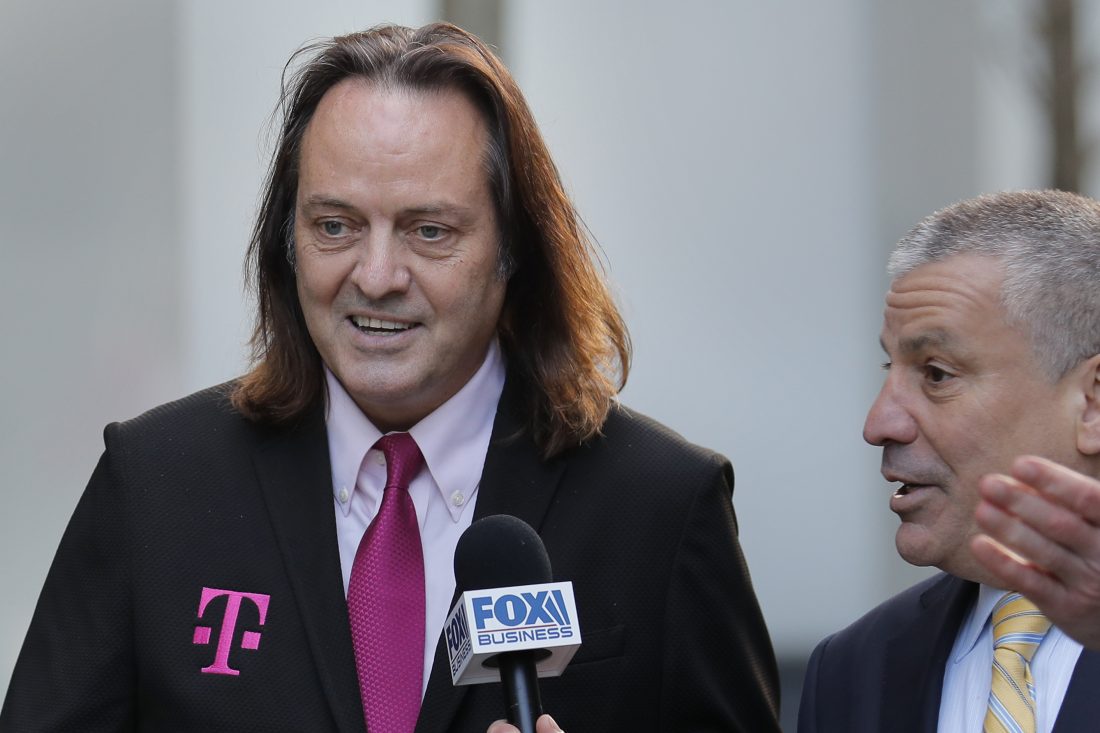 T-Mobile chief executive John Legere speaks to reporters as he leaves the courthouse in New York Jan. 15. Legere was in court to hear closing arguments in the case that could permit T-Mobile to merge with Sprint. (AP photo)

NEW YORK — A federal judge has removed a major obstacle to T-Mobile’s $26.5 billion takeover of Sprint, as he rejected claims by a group of states that the deal would mean less competition and higher phone bills.

Though the deal still needs a few more approvals, T-Mobile expects to close it as early as April 1.

Once that happens, the number of major U.S. wireless companies would shrink from four to three. T-Mobile says the deal would benefit consumers as it becomes a fiercer competitor to the larger Verizon and AT&T. The deal would also create a new, but smaller competitor as satellite TV company Dish pledges to build a next-generation, 5G cellular network.

But a group of state attorneys general tried to block the deal, arguing that having one fewer phone company would cost Americans billions of dollars in higher bills. Consumer Reports said the three remaining carriers would have fewer incentives to compete on prices and quality.

Judge Victor Marrero said Tuesday that most antitrust litigation ends in a “competing crystal balls” that “shed little light on a clear path to resolving the dispute.”

Ultimately, Marrero said he wasn’t convinced the deal would lead to higher prices or lower quality for the wireless industry, as the states insist. He also said he found that T-Mobile executives were credible at trial in promising to continue competing aggressively with AT&T and Verizon.

The judge said the states are right that both Sprint and T-Mobile will provide 5G service without the combination, but the standalone companies’ 5G networks would be more limited in their scope and take longer to build.

Marrero’s decision comes after the Justice Department already approved the deal. As part of a settlement with the Justice Department, T-Mobile agreed to help create a competitor in Dish. Another judge still needs to approve that settlement, a process that is usually straightforward but has taken longer than expected. A utility board in California also has to approve the deal.

New York Attorney General Letitia James, one of the leading attorneys general in the case, said her office was considering an appeal. She said Tuesday’s ruling “marks a loss for every American who relies on their cell phone for work, to care for a family member, and to communicate with friends.”

Gigi Sohn, a fellow at the Georgetown Law Institute for Technology Law & Policy, said that while consumers are often promised benefits from mergers, “what they are left with each time are corporate behemoths who can raise prices at will, use their gatekeeper power to destroy competition and new voices and hijack regulatory and legislative processes.”

T-Mobile launched its bid for Sprint in 2018, after having been rebuffed by Obama-era regulators. T-Mobile CEO John Legere had seen President Donald Trump’s election and his appointed regulators as a good opportunity to try again to combine, according to evidence during the trial.

T-Mobile, which promised not to raise prices for three years, repeated previous arguments that the combined T-Mobile and Sprint will be able to build a better 5G network — a priority for the Trump administration — than either company could alone.

The deal got the nod from both the Justice Department and the Federal Communications Commission, thanks to an unusual commitment to create a new wireless player in Dish, a satellite TV company with a shrinking customer base. T-Mobile agreed to sell millions of Sprint’s prepaid customers to Dish. T-Mobile also has to rent its network to Dish while the fledgling rival built its own. Dish is also required to build a 5G network over the next several years.

Dish co-founder Charlie Ergen said in a statement that the ruling will accelerate its ability to deploy 5G and that its growth as a new competitor will bring “lower prices, greater choice and more innovation to consumers.”

The states had said that Dish wasn’t certain to succeed as a wireless company and was far smaller than Sprint, and the resulting wireless market would still be worse for consumers.

Dish has spent about $21 billion over a decade buying wireless spectrum, the airwaves for transmitting data and calls, although Dish hasn’t done much with it. Analysts have long been skeptical of whether Dish intends to build its own network or sell the spectrum to others. Now Dish faces up to $2.2 billion in fines if it fails to create a 5G network that serves 70% of the country by 2023.

Some analysts have said that Dish has potential as a viable competitor, but a big question is when. Even if it meets the 2023 government-imposed deadline, it still won’t reach as many potential customers as Sprint’s current-generation 4G network does today.

George Slover, senior policy counsel for Consumer Reports, said Sprint was an established carrier with a track record of spurring competition, while Dish is an unproven newcomer that will have to build its mobile phone network and services from scratch.

In the ruling, Marrero said he didn’t think Sprint would be a “strong competitor” as an independent company. And he disagreed that Dish wouldn’t be a viable competitor or live up to its commitments to build a national wireless network.