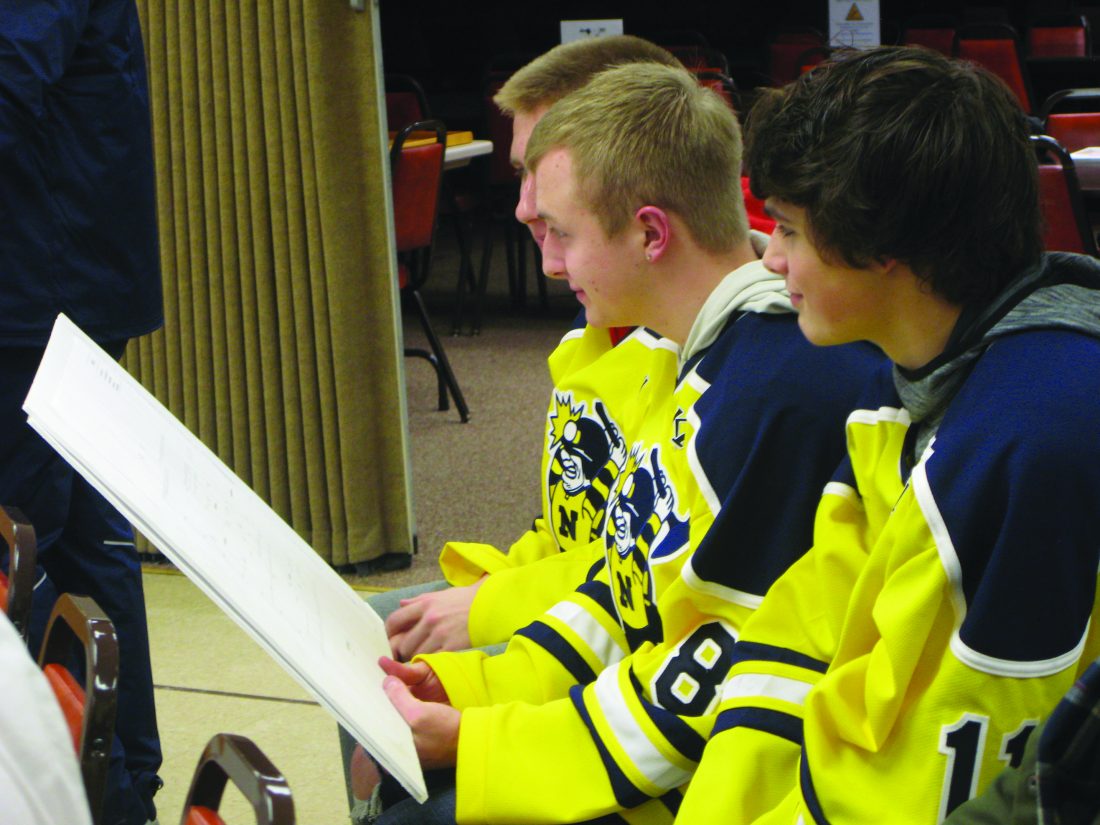 From left, Negaunee Miners Hockey players Garrett Mann, Hunter Perry and Jack Mattias look at an archetectural drawing of a proposed locker room improvements at the Negaunee Ice Arena, during a city council meeting on Thursday. The Minershockey Coach Dale Hopper updated the council on the privately funded project. The arena is owned and operated by the city. (Journal photo by Lisa Bowers)

Councilors voted unanimously Thursday to set a Feb. 13 public hearing to move forward with a public auction of the eastern-most parcel of the property.

Officials removed the park from the city’s master plan in November.

The goal, City Manager Nate Heffron said, is to sell the parcel to Negaunee Public Schools for the purpose of using and maintaining the tennis courts.

“This is designed for the school to get it and remain in the public trust,” Heffron said. “The school has indicated they will be resurfacing those courts and taking care of the property itself. In addition to that it has to remain open to the public and if they ever want to sell it, or let’s say tennis doesn’t become very popular in Negaunee in 20 years or something, and they stop their program and close it down that property could revert back to the city. Through the terms of the (document), it cannot be sold to the public for private use.”

The council also heard an update from Negaunee High School hockey coach Dale Hopper about the Iron Range Hockey Association about a locker room project at the Negaunee Ice Arena.

The project, which has the support of the Negaunee Recreation Committee, will integrate a new Negaunee High School locker room into the existing facility using private funds, according to an agenda supplement.

“It will be a much-needed improvement at the ice arena,” the supplement states.

The council also set a Feb 13 public hearing to gather input on its Downtown Development Authority boundary expansion and redevelopment plan. Heffron said once the plan has been approved by the Downtown Citizens Advisory Council it will be available to the public on the city website.

Councilors also voted to set an additional public hearing on Feb. 13 for a second reading of a zoning ordinance amendment adding marijuana establishments to industrial districts as a special land use.

An ordinance approved by the council on Nov. 15 would allow marijuana businesses to register in the city effective Jan. 1, but only in industrial zones with a special land use permit from the Negaunee Planning Commission.