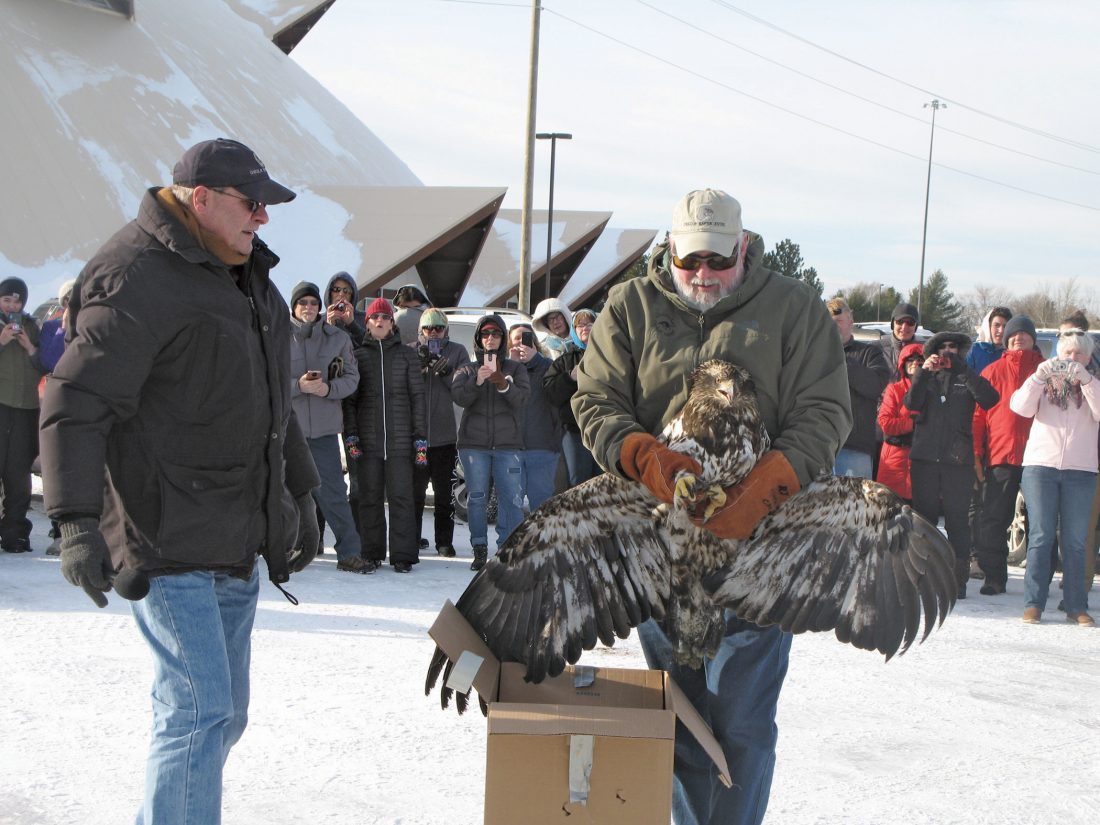 Jerry Maynard, left, and Bob Jensen, co-founders of the Chocolay Raptor Center, prepare to release a rehabilitated bald eagle back into the wild on Tuesday east of Northern Michigan University’s Superior Dome. The bird showed high levels of lead in its system. Because the eagle is a juvenile, it does not yet have its notable white head. (Journal photo by Christie Bleck)

MARQUETTE — The Chocolay Raptor Center released a bald eagle back into the wild on Tuesday, but maybe more importantly, the event served as a lesson on the dangers of lead poisoning in the wild.

The release took place near the Superior Dome at Northern Michigan University, an appropriate spot considering its proximity to Lake Superior and the fish that inhabit it.

On Dec. 7, the juvenile bald eagle, which had been feeding on a deer carcass, was rescued by the Michigan Department of Natural Resources and transferred to the Chocolay Raptor Center, based in Harvey, for evaluation.

“It tried to get away, but it couldn’t fly, indicating something was wrong,” said Jerry Maynard, president and co-founder of the center.

An examination at the center didn’t reveal any obvious injuries that would have resulted in the bird’s inability to fly.

“We suspected, given the time of year and just at the end of hunting season, possible lead poisoning,” Maynard said.

The center rehabilitates raptors such as owls, hawks and falcons but not eagles, so after consultation, the eagle was transferred to Wild Instincts, a wildlife rehab center near Rhinelander, Wisconsin.

As is standard procedure, Wild Instincts performed a blood lead-level test, the Chocolay center said, and results indicated the eagle was suffering from lead poisoning with results exceeding the instrument’s upper limit of 65 picograms per decaliter. Anything over 20 picograms per decaliter is considered clinically toxic, and chelation therapy started immediately.

“Actually, the odds of a bird with that high a lead level surviving is pretty small,” Maynard said.

Swift treatment helped, he noted, and after six to seven weeks of chelation therapy, the eagle’s health rebounded. Then, blood lead levels were found to be non-detectable in the eagle, which was eating well and flying strongly, with the bird having been in conditioning for the last two weeks to prepare it for release.

Because the bird, which at the time of release weighed 11 pounds and is believed to be a female, is a “Yooper eagle,” the Chocolay Raptor Center returned it to the wild locally, with the release serving as a lesson about lead poisoning.

According to the Chocolay center, lead poisoning is a major problem for eagles and vultures, the only raptor species that get all or a significant amount of their food from carrion, or dead animals. In fact, this particular eagle was observed feeding off a deer carcass in Newberry for two days.

Another facility, the Raptor Center, part of the University of Minnesota College of Veterinary Medicine, has documented that 20-25% of the eagles it treats in rehab have clinical lead poisoning, and most die or are euthanized. A study pointed to spent lead from deer hunting as the primary source of lead poisoning.

The Chocolay Raptor Center also reported that lead tackle — sinkers — in fishing gear is the second most common source of lead poisoning, and is the suspected cause of the poisoning of an eagle rescued in Menominee in September. That eagle is improving slowly but isn’t strong enough to be released yet.

The Chocolay Raptor Center believes there are viable alternatives to lead ammunition and tackle, most notably copper, with the cost comparable and performance excellent in all studies.

It pointed out that California has banned all lead ammunition because of its huge impact on the California condor, the largest raptor in North America. Several decades ago, the population of California condors was down to a few dozen birds, but the last remaining wild birds were captured and a captive breeding program was started.

Along with an extensive education program on the toxicity of lead and controls on lead ammunition that progressed to the total ban effective this year, the program has been a success, organizers said.

According to the California Condor Recovery Program’s 2018 annual population status, the total world population, including wild free-flying and captive populations, was 488.

“We think raptors are iconic,” Maynard said, “and raptors are kind of a canary in the coal mine for toxicity.”

For instance, the outlawing of the pesticide DDT in the United States helped the bald eagle population rebound.

“Eagles are the most common raptor that we rescue,” Maynard said. “We average one a month, and people say, ‘Well, gee, that’s awful that so many birds are getting injured or sick,’ and I say, ‘Well, that’s an indication of how many birds there are out there, of eagles, which is a real great recovery.'”

Lead, however, remains a threat.

“Get the lead out” is Maynard’s message. “Lead is extremely toxic. A piece of lead less than a grain of rice will kill an eagle.”

More information on the Chocolay Raptor Center, which in addition to rehabilitation efforts gives educational programs, can be found on Facebook.