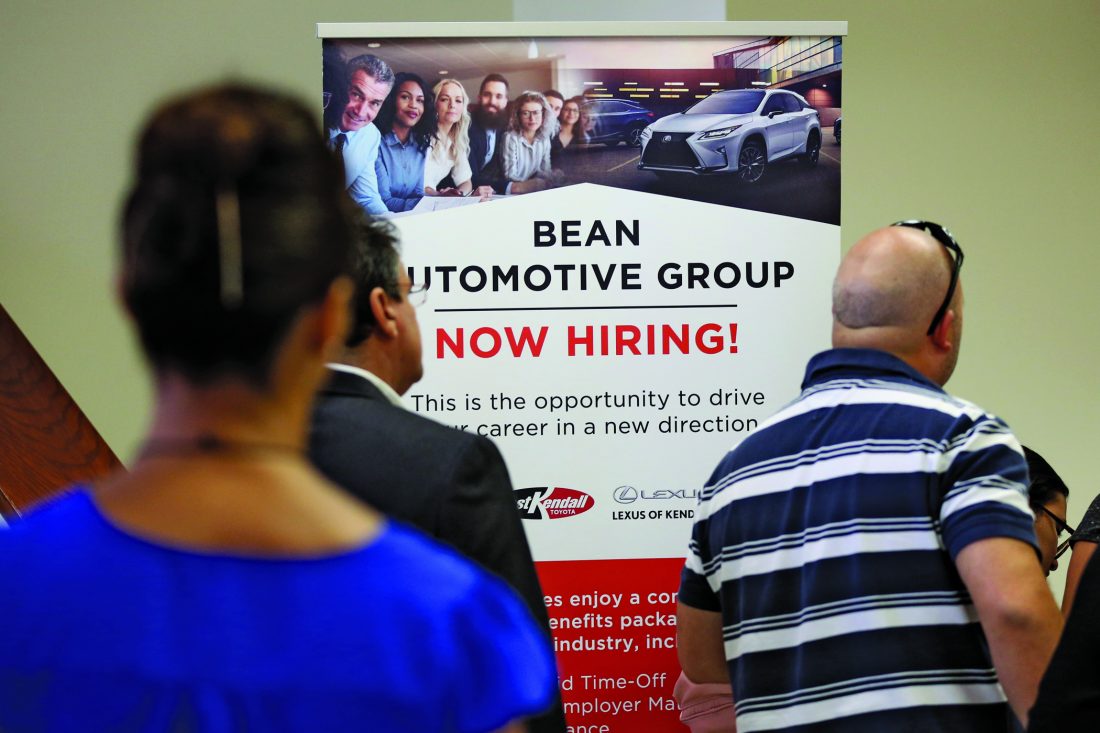 In this Sept. 18 photo people stand in line to inquire about jobs available at the Bean Automotive Group during a job fair in Miami. (AP photo)

WASHINGTON — U.S. employers downshifted their hiring in December, adding 145,000 jobs as consumer spending appeared to aid gains in the retail and hospitality sectors.

The Labor Department said Friday that the unemployment rate held at 3.5% for the second straight month, prolonging a half-century low. Hiring slipped after robust gains of 256,000 in November caused in part by the end of a strike at General Motors.

Still, the job growth has failed so far to put upward pressure on hourly pay. The pace of annual average wage growth slowed in December to 2.9% from 3.1% in the prior month, a possible sign that there is still room for additional job gains despite the decade-plus expansion.

The U.S. economy added 2.1 million jobs last year, down from gains of nearly 2.7 million in 2018. Hiring may have slowed because the number of unemployed people seeking work has fallen by 540,000 people over the past year to 5.75 million. With fewer unemployed people hunting for jobs, there is a potential limit on job gains.

The steady hiring growth during the expansion has contributed to gains in consumer spending. Retail sales during the crucial holiday shopping improved 3.4% compared to the prior year, according to Mastercard SpendingPulse. This likely contributed to a surge of hiring in retail as that sector added 41,200 jobs in December.

The leisure and hospitality sector — which includes restaurants and hotels — added another 40,000 jobs. Health care and social assistance accounted 33,900 new jobs. Still, the report suggests a lingering weakness in manufacturing.

Manufacturing struggled last year because of trade tensions between the United States and China coupled with slower global economic growth. Safety problems at Boeing have also hurt orders for aircraft and parts.