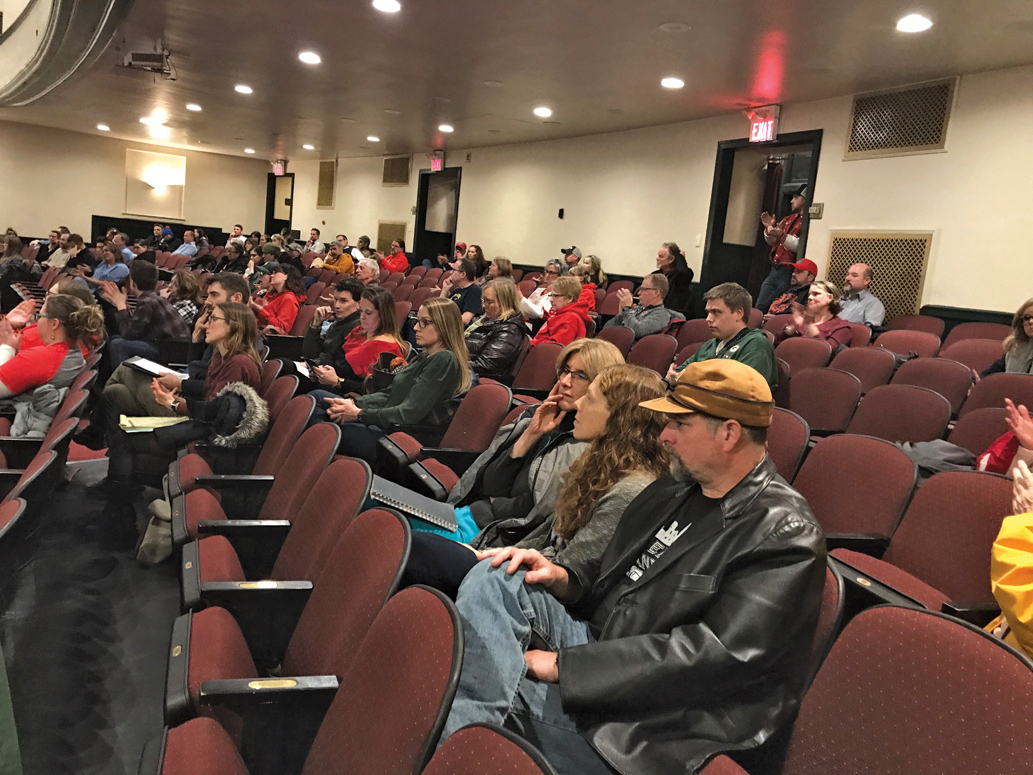 Community members fill Kaufman Auditorium on Monday night to express their opinions for or against the possible changing of the Marquette Senior High School’s Redmen/Redette nicknames. The Marquette Area Public Schools Board of Education heard dozens of comments from students and non-students. (Journal photo by Christie Bleck)

The Marquette Area Public Schools Board of Education heard dozens of comments in favor of keeping, or discontinuing, the names at its regular meeting on Monday at the Kaufman Auditorium.

At the Dec. 16 MAPS board meeting, the Marquette Senior High School Nickname Research Committee recommended ceasing the nicknames’ use.

Even though the nickname Redmen originated from the Harvard University crimson-red of a former superintendent’s alma mater, the meaning had come to change over the years, even though a logo of a Native American in a headdress had been phased out.

The issue has become so contentious in the community that MAPS Superintendent Bill Saunders issued a statement at Monday’s meeting.

He said the issue was causing “divisiveness, heartache and pain for students, teachers, alumni and the community.”

Saunders mentioned the many hours the board and administration has spent on the issue, pointing out that it has taken valuable time and energy from the education and lives of schoolchildren.

“Contrary to some schools of thought, the board and myself wanted to avoid this debate if it were at all possible,” Saunders said

He noted MAPS Board of Education President Rich Rossway educated them on the turmoil that took place when the issue last came up in 1998-99.

Saunders said that he and the board have been approached “countless times” with pleas to change the name.

“Each time, these pleas faded without pushing it to action,” Saunders said. “So, why now?”

Although he didn’t go into detail, he said an event took place during the homecoming football game that resulted in a viral social media reaction.

Saunders said that after reaching out to Chris Swartz, Keweenaw Bay Indian Community tribal president, the board was “kindly” asked to retire the nickname for the harm it has caused Native American students.

To draw on different perspectives, the committee was formed, he said.

“Whether or not anyone, including our own board of education, agrees with the committee’s recommendation, these folks were given the unenviable task of making a recommendation for an irreconcilable dilemma,” Saunders said. “This act of service has caused irreparable harm to them in the form of strained relationships, stress and attacks on their reputations. For this, I am remorseful.”

Saunders said that since the December meeting, the nickname issue has been “the talk of the town.”

“All of the effort leading to this point has been to define a problem from a polarized (perspective),” Saunders said.

He said a split vote of the majority of the board siding one way or another likely will intensify the debate.

“A recall of board members is possible,” Saunders said. “Competition to place community members to shift power and decide this issue will be intense. The debate will rage on, and our students will suffer because the focus isn’t squarely on them.”

Board members have been meeting individually or in small groups to see if a compromise exists, he said.

“A balanced solution is one that doesn’t make for winners and losers but moves the district forward in a positive light,” Saunders said.

He hopes that between now and the February board meeting, these conversations still can take place.

“If all else fails, I fear the only remaining option would be to follow a democratic process of some sort of professional survey,” Saunders said.

Local residents strongly expressed their opinions on both sides, using terms such as “manufactured crisis,” “unnecessary divide” and “outdated stereotype.”

Speaking in favor of keeping the nicknames was Scott Martin, who said he is of Cherokee and Dutch descent.

“I’m not offended by the name at all,” Martin said.

However, he believes talks should continue.

Martin also said he is for “education but not eradication.”

“You can change the names,” he said, “but our Native brothers and sisters who are coming behind me, they’re still going to be teased because they look different.”

Sam Holcomb said the issue shouldn’t come down to majority rule, with leadership sometimes having to make the “right” decision.

He said the Redmen nickname is racially insensitive, noting that a name referring to another race’s skin color would be considered offensive.

“Why should it be different for Native Americans?” Holcomb asked.

Ann Hilton Fisher told the board she had researched the issue and learned about the “huge” variety of Native American faces and figures associated with schools and sports teams in yearbooks.

“I learned that though we have much to be proud of, there’s also much now, looking back, that we should regret,” Fisher said.

She noted the mascots mostly were terrible, “even the noble ones.”

“There was a full-page that showed up in 1992, and in 2001, with a man with his arms crossed over his chest, naked to the waist, feathers in his hair, wearing a loincloth and leather breeches with a knife at his side,” Fisher said.

However, she said the yearbooks also gave her hope, mentioning a poem that appeared in 1980.

“The essential message rings true,” Fisher said. “We must work together. We must fight for each other, not against each other. We can believe in what we are doing. We can admit the wrong we have done, and then we can look to the future — a future that perhaps should retain our heritage red but carries us forward with a new team name that includes, encourages and motivates every single one of us.”