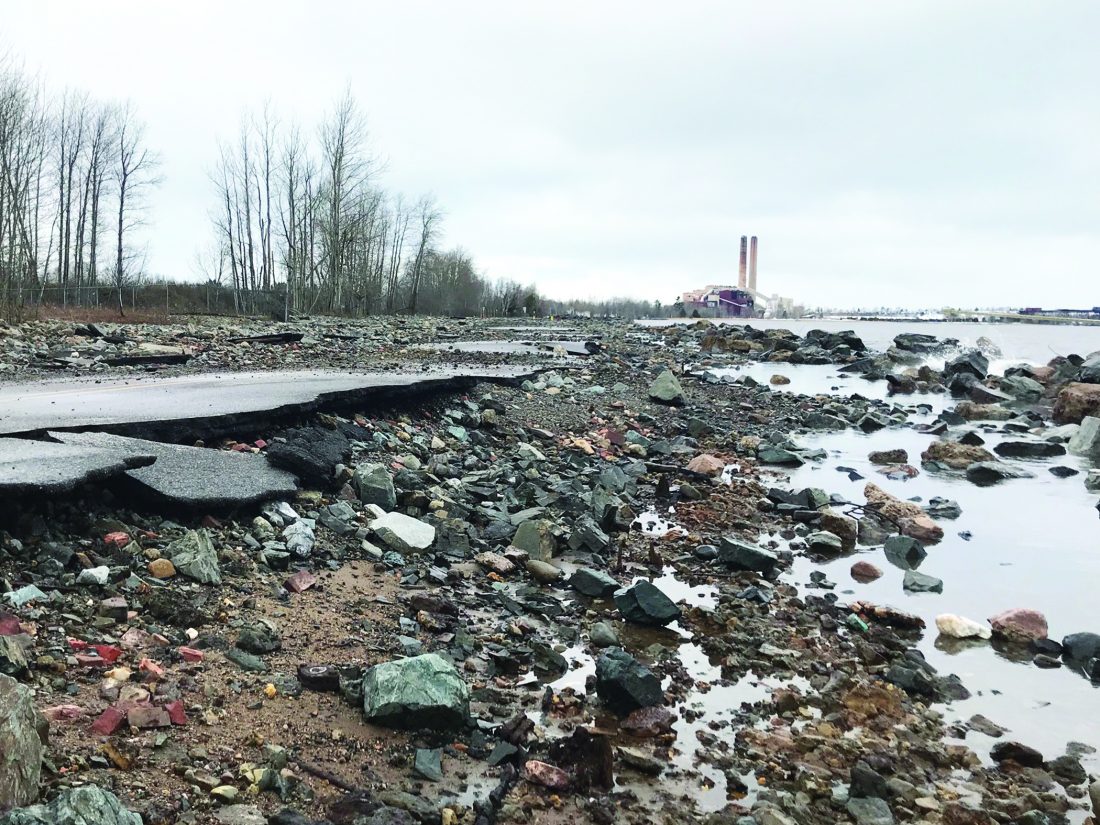 MARQUETTE — What’s in store for Marquette’s lakeshore? It’s a question many area residents have been asking as water levels rise and storms strike, exacerbating erosion issues along the city’s lakeshore.

This fundamental question was the topic of discussion at a Marquette City Commission work session Thursday evening, where commissioners, city staff and area residents gathered together to learn more about the past, present, and future of the city’s lakeshore.

The work session followed a tour of Marquette’s coastline from South Lake Street to Lakeshore Boulevard near Wright Street held for city staff and commissioners.

City staff, working with commissioners and other entities, have been developing plans and obtaining grants to protect the lakeshore and Lakeshore Boulevard for around two decades, city officials said, noting they’ve gathered extensive public input over the years.

A major topic of the discussion was the stretch of Lakeshore Boulevard between Wright and Hawley streets, which suffered “catastrophic failure” during the late November storms. 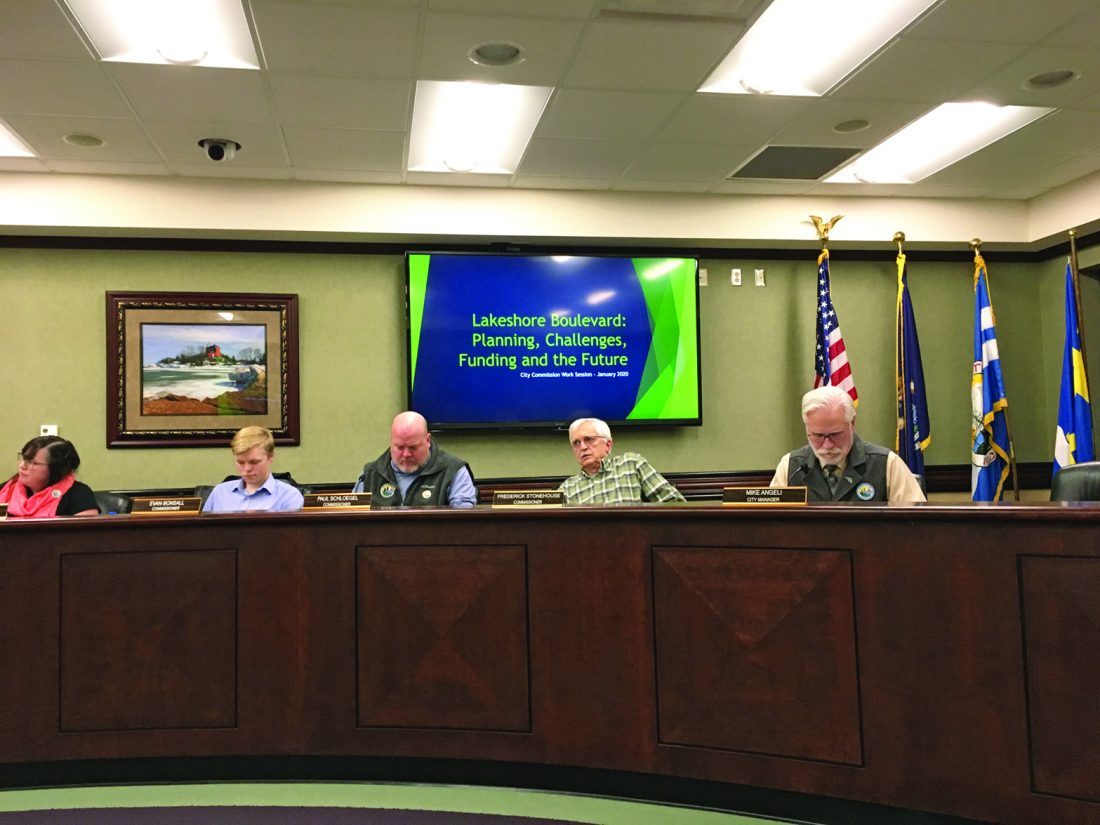 “There is no real coming back from the damage that’s been done to that road other than redoing that road,” Marquette Director of Public Works Scott Cambensy told the commission. “It has failed completely at this point for at least a third to half of that stretch.”

However, the stretch of road between Wright and Hawley streets is planned to be relocated starting this spring, with the city seeking bids for the first phase of the project this winter.

The $12.3 million project involves moving around a mile of the road 300 feet inland and elevating it several feet with a roundabout at the terminating vista, shoreline restoration work, moving the multi-use pathway, as well as developing two parking areas and two viewing platforms.

“We can’t use the road. It’s been pretty much demolished with these last storms. Fortunately, because of the things that have been put in place, we are able to approach this, this next year really running,” Commissioner Paul Schloegel said. “And that’s a humongous advantage to the city of Marquette. There’s communities right now that are in over their heads right now in the water because they just haven’t had the planning and experience and the foresight.”

The road, once completed, is expected to have a lifetime of at least 20 years and will be located beyond the area engineers identified as a zone that could be lost in 100 years if nothing was done to protect it, city officials said.

“The road is still going to be located outside of that area for 100 years,” Marquette Community Development Director Dennis Stachewicz said.

The first phase, to be started this spring, will involve relocating the road and repairing the shoreline for a total cost of about $4.3 million, they said. The second phase, at a cost of roughly $8 million, will consist of the remaining work, city officials said.

The plans for funding the work include a 2018 National Fish and Wildlife Foundation Coastal Resiliency, Shoreline Stabilization and Habitat Restoration grant for $2.5 million with a $3 million match from the city and the Superior Watershed Partnership, which is currently in the city budget.

There is also a pending Federal Emergency Management Agency Pre-Disaster Mitigation Program grant for the relocation, which would be a $2.7 million grant with a $675,000 match from the city that is not currently budgeted for, city officials said.

Commissioner Jenn Hill asked about the value of relocating the road at such expense in light of a changing climate and the fact that there are few residences and no business along the stretch.

“At what cost do we start to say that road is not worth it anymore?” Hill asked.

However, others said they felt the shoreline restoration work — which accounts for nearly $10 million of the project’s cost — is a critical project that will need to be completed regardless.

“Most of that cost is actually in the process of protecting and rebuilding our shoreline, not in the road itself … it’s actually more of a $2-3 million one-mile road and the rest is going toward protecting and rebuilding the lakeshore in that stretch, which is going to need to be done one way or another,” Commissioner Evan Bonsall said, noting he wants to ensure the project would pay for itself over time by reducing maintenance costs in the area.

The stretch of Lakeshore Boulevard between East Fair Avenue and Pine Street was also the subject of much discussion, as it suffered significant erosion during storms in October and November.

“In the last year, we’ve seen dramatic change,” Cambensy said. “There was a point in time where this section of road probably had 20 to 50 feet of forested dunes and probably another 100-plus feet of beach … The water levels have risen, the erosion has gotten worse along that stretch. There’s areas where the edge of the water is less than 20 feet from the road now.”

Due to the erosion, the city commission approved over $200,000 for two separate rounds of emergency bank stabilization work in that area this fall.

The work involved armoring around 1,400 linear feet of shoreline in an effort to protect the road, the Lakeview Arena storm drain and the bridge, with crews building a “temporary breakwater” so they “could work without more erosion taking place,” Cambensy said.

Additionally, the city commission in December approved an application for a $200,000 Department of Environment, Great Lakes and Energy Coastal Management Zone grant for planning and construction work in portions of that area. If approved, the funds could be awarded in October, with a required $200,000 local match.

While there isn’t currently a long-term plan for that stretch, options for that section of the road include doing nothing, rerouting it, or modifying and strengthening the shoreline, depending on funding, Stachewicz said, noting they would seek further input from the public and the commission on the future of that area.

“As we work through the coastal zone management planning grant, if we’re successful at achieving that — or even if we’re not — this is something right here that is going to need some policy direction from the city commission,” he said, adding he wants to see “the public process to play out” in terms of what the community wants to see in that area.

There are also plans drawn up to address issues with Lakeview Arena storm drain, with work budgeted in the coming year’s budget, city officials said.

With rising waters and more extreme weather events, several commissioners noted they felt it would be important to understand the underlying hydrology of the erosion issue moving forward.

City staff said the U.S. Army Corps of Engineers recently had around $100,000 appropriated through Section 111 for a preliminary coastal study in the area. Depending on the outcome of the study and federal government approval, the city could receive up to $10 million in federal dollars for coastal work with a 35% local match required.

In addition to this study, the city expects to receive a report on the hydrology of the coastline in the coming months from Baird, an engineering firm that has served as a consultant on the Lakeshore Boulevard relocation project.

City staff and commissioners also discussed the shoreline stabilization work for the multi-use path and road along U.S. 41 South near the Welcome Center, which is owned by the Department of Natural Resources and in the Michigan Department of Transportation right of way. The city, in conjunction with the DNR and the Superior Watershed Partnership, has submitted an application for an $837,000 grant for work in that area, with a tentative award date in 2020. Beyond these issues, erosion at Presque Isle Park’s sunset point, Shiras Park and other areas were also discussed.

To learn more about the city’s plans for Lakeshore Boulevard and the lakeshore as a whole, visit marquettemi.gov.