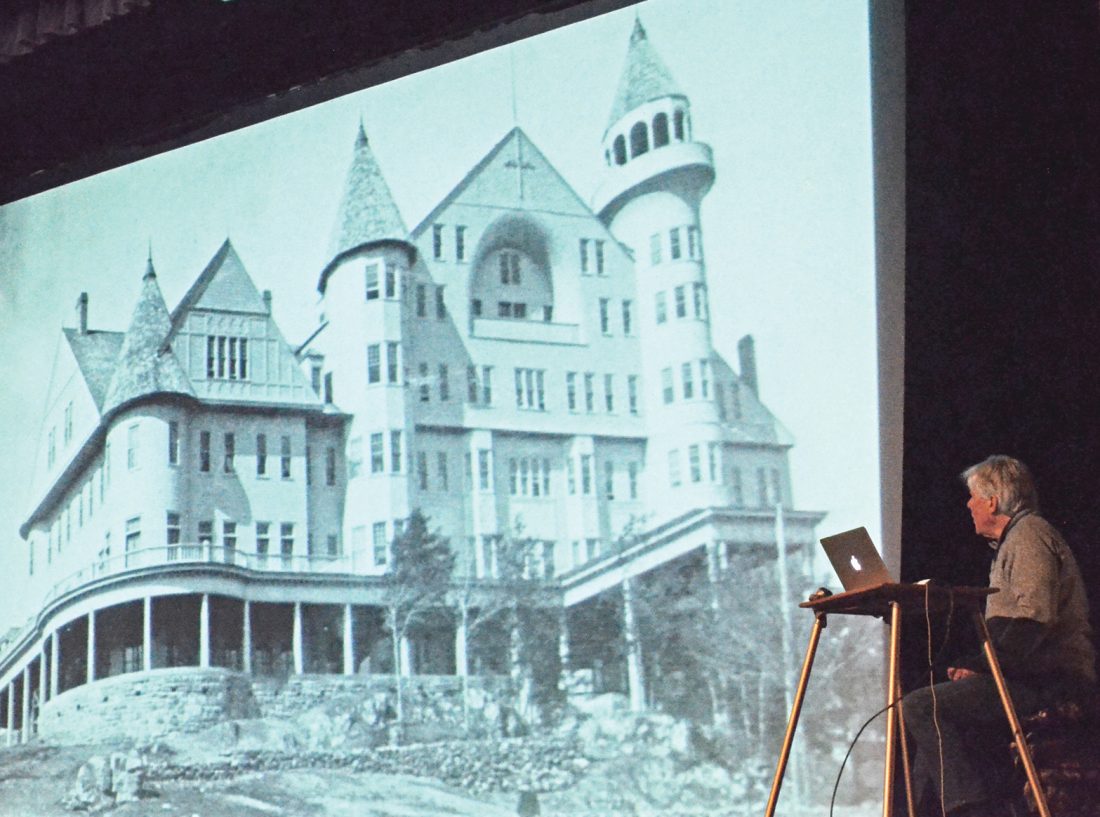 Jack Deo talks about the Superior Hotel that once took residence in Marquette, overlooking the lake Thursday at the Kaufman Auditorium during the North vs. South Marquette visual presentation. (Journal photo by Jackie Jahfetson)

MARQUETTE — Marquette has transformed throughout history.

Not only in terms of the city’s features and buildings, but the line between north Marquette and south Marquette has also faded over time.

Two local historians, Jack Deo and Jim Koski, illustrated the historical division between the city of Marquette during a presentation of personal stories and visuals at a sold-out presentation Thursday at the Kaufman Auditorium.

The show came together as a follow-up from the south Marquette walking tour held by Koski in August.

The event was quite a hit, Koski said, adding, he thought it would be more beneficial to talk about the two regions of the city in one presentation. But Koski said he was also fascinated by the connections that he stumbled upon.

“I think actually discovering how similar the two neighborhoods were because (by) the time north Marquette started in the 1890s, for the next 50 or 60 years, there was like (bad) blood,” Koski said. “They used to refer to the north Marquette kids as the swamp rats and the south Marquette kids as the dump rats … and they would just be fighting with each other. And learning all of this stuff, you can actually figure out why, because they were actually the same kind of people.”

Growing up in south Marquette, Koski said he’s been collecting the stories for years. The amount of time and research that went into hosting this event entailed a few months of planning, but the most challenging thing was finding photographs of the two regions of Marquette, Koski noted.

So, Deo and Koski relied on interviewing older community members who grew up in those regions who had vintage photos. The process became a “daisy chain” as one source would lead to the next, Koski said.

This is the fourth show Deo and Koski have collaborated on, they said.

What makes the presentations work is the down-to-earth delivery style and humorous aspects, Deo said.

“We always try to have humor in the show. There’s got to be some funny spots too, to make history fun,” Deo said. “The reaction of the crowd is the best part when you know laughs are coming and you hit that button … people love history in Marquette and this proves it.”

The presentation included several photos of establishments and groups, highlighting the transformation of things such as the hockey league, bars, schools, horse stables and buildings around Marquette.

For Dean and Cindy Ogle of Chocolay Township, the presentation brought back the nostalgia of what it meant to grow up in those times.

“I’m from the swamp and my wife is from south Marquette,” Dean Ogle said. “I liked it, it brought back memories: The smell of Cliffs Dow … when you lived out there, whenever the wind blew from the northeast, you’d smell that smell.”

Not many understand the history and are able to recognize connections between the prominent founding families unless they grew up during those times, Dean Ogle said.

“Just to see the progress and changes, and to be able to identify the old pictures from what I grew up with, that would have to be it for me,” Cindy Ogle said.

Though several establishments are no longer in business and the terrain has changed from what it once was, the countless memories and stories will live on, Koski emphasized.

“I don’t think people understand the kinds of people that lived in the two neighborhoods; they don’t understand that these were the people who came to this country (who) sometimes didn’t speak English. They were the ones who manually built the city,” Koski said. “If it wasn’t for the people of south and north Marquette, we wouldn’t have the magnificent city that we have now.”