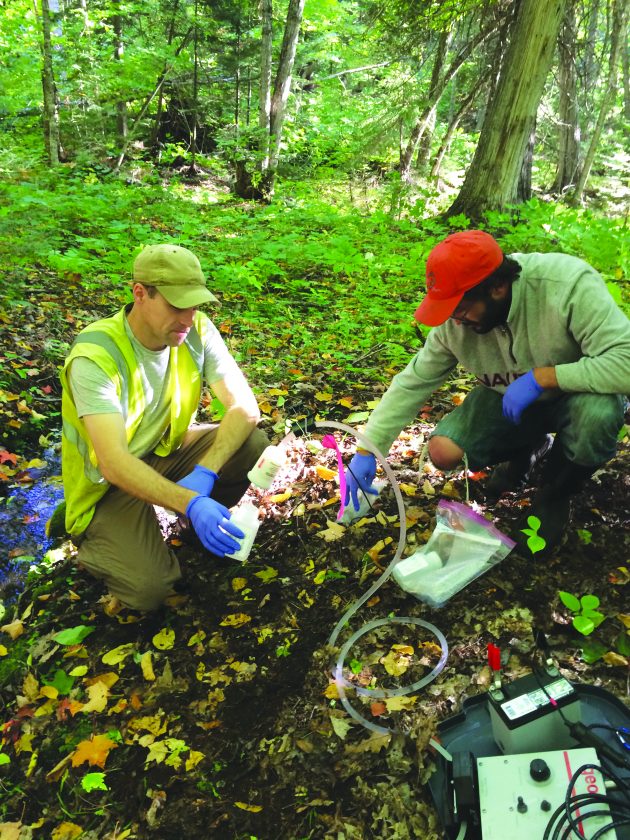 From left, Jeff Koch of the Superior Watershed Partnership and Jaren Forcia of the Keweenaw Bay Indian Community conduct environmental testing as part of the Community Environmental Monitoring Program for Eagle Mine. The SWP and the KBIC are responsible for conducting third-party environmental monitoring at the mine and making the information publicly available at swpcemp.org. (Photo courtesy of the Superior Watershed Partnership)

Editor’s note: This is part four of a series on the Community Environmental Monitoring Program, or CEMP, which is an agreement among the Superior Watershed Partnership, the Keweenaw Bay Indian Community, the Community Foundation of Marquette County and Eagle Mine. This article outlines the role of the SWP in the program. Previous articles covered the signing of the most recent agreement, as well as the roles of the community foundation and the mine. The next article will focus on the Keweenaw Bay Indian Community’s role in the project.

MARQUETTE — How can a small, rural community keep tabs on the environmental impacts of the nation’s only primary nickel mine?

This was a question asked by many concerned area residents as plans for opening the Eagle Mine in the Yellow Dog Plains — which contains the ecologically-significant headwaters of the Yellow Dog and Salmon Trout river — moved forward, with siting and construction work starting in 2010 after the ore body was discovered in 2002.

However, it would eventually lead a diverse group of players — the mine, the Superior Watershed Partnership, and The Community Foundation of Marquette County — to develop a unique solution based on sharing third-party environmental testing data at the mine with the community through compromise and partnership.

The first Community Environmental Monitoring Program, or CEMP, agreement among these parties was signed in 2012, marking the start of an unprecedented program for the area.

“In 2011, after the mine had received permits to operate from the State of Michigan, the SWP was contacted by Rio Tinto — then-owner — about forming a community environmental monitoring program due to local opposition,” SWP Executive Director Carl Lindquist said in an email. “After lengthy discussions, the SWP Board in partnership with the Community Foundation of Marquette County agreed to help design and implement the CEMP program.”

The community foundation acts as the convener and a fiduciary pass-through agency for the program, as Eagle Mine pays for independent monitoring by providing up to $300,000 annually.

The most recent CEMP agreement was signed on Dec. 12 and added the Keweenaw Bay Indian Community to the agreement after a year-long negotiation process among the partners.

The current agreement extends through 2025, which Lindquist said “is especially important in light of the fact that the monitoring agreement will include the first phase of mine closure.”

The third-party environmental monitoring of the mine conducted by the SWP, now in conjunction with the KBIC, “includes assessments of air quality, groundwater quality, surface water quality, wildlife, plant life and more in the area of the mine,” Lindquist said.

“It allows SWP to conduct additional monitoring — monitoring that is not required by state permits — at its own discretion and in consultation with the community, provides an independent source of information to the community, and raises the bar for monitoring and establishing a scientific basis for evaluating the company environmental performance over time,” he said.

It also allows the community to be truly involved in the process, as the “monitoring is based on new information and/or results, community or tribal input, and/or new mining activities,” he added.

“Prior to conducting additional monitoring, a plan is developed including scientific standards for each type of monitoring. Results are compared to previously collected (baseline) data and appropriate state, federal, and international standards,” Lindquist said. “The CEMP monitoring program is flexible and can be adapted to accommodate any new concerns identified by the community, KBIC, SWP or other organizations.”

In the years since the first agreement, Lindquist reports “there have been no permit violations to date.”

“However, there are several monitoring sites near the mine and the mill that have shown increases in certain parameters and are being tracked by CEMP, please see the CEMP website for more information on monitoring results,” he said. “Eagle Mine staff have been always been professional and cooperative with all CEMP partners. The SWP, KBIC and CFMC urge all interested parties to review eight years of monitoring data on the CEMP website, www.swpcemp.org.”

Overall, Lindquist was glad to see another CEMP agreement signed, he said, as CEMP provides the community with a wealth of publicly available third-party environmental testing data on the mine that wouldn’t otherwise be available.

“The fact that all parties — Eagle Mine, SWP, KBIC, CFMC — have agreed to continue CEMP speaks volumes about the value of the program to the public whether stakeholders are in support of the mine or opposed,” Lindquist said.