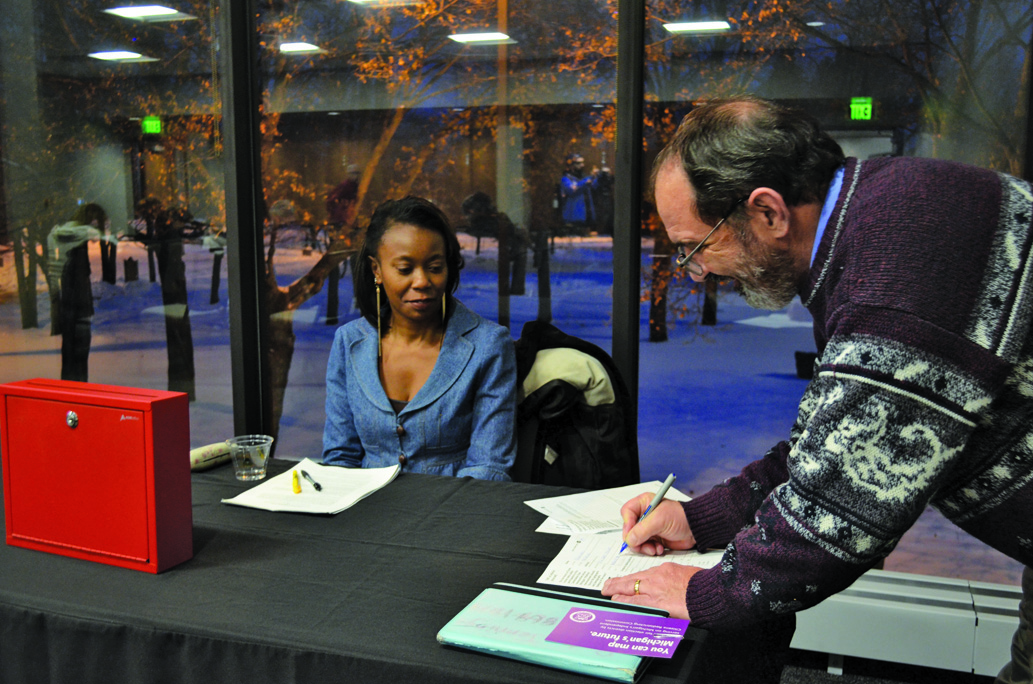 From left, Adrienne Zeigler, a public engagement associate with the Michigan Department of State and a notary, prepares to notarize an application for Michigan’s new Independent Citizens Redistricting Commission as Pat Jennings, at right, fills the application out during a workshop held by the Michigan Secretary of State’s office Thursday night at Northern Michigan University. Attendees of the workshop were able to learn more about the commission and redistricting process, as well as submit their applications to serve on the commission. Applications are also available online and at the Marquette County Clerk’s Office, where they can be notarized free of charge, organizers said. (Journal photo by Cecilia Brown)

MARQUETTE — Any eligible Michigan voter who applies has a chance at being selected to serve on Michigan’s new Independent Citizens Redistricting Commission — meaning you, your friends, family and neighbors all have a shot at making history by serving on the state’s first panel of its type.

Marquette-area residents were able to put their name into the proverbial hat for a chance at being randomly selected to serve on the new commission during a workshop held Thursday by the Michigan Secretary of State’s office at Northern Michigan University.

The workshop aimed to provide an overview of the new redistricting process, information about the commissioner selection process and the commission itself, step-by-step instructions about the application process, as well as chance to fill out the application and get it notarized free of charge, said Loida Tapia, director of public engagement for the Michigan Secretary of State.

“Citizens overwhelmingly supported Proposal 2 with the Independent Citizens Redistricting Commission and (Voters Not Politicians) was a huge part of making that happen,” Tapia said. “So we’re really excited to be working in conjunction with the VNP and making sure that all of the volunteers and everyone that voted for the commission under amendment and Proposal 2 are able to now apply for the Independent Citizens Redistricting Commission.”

The commission — which will be a randomly selected 13-member body, consisting of four members each from the Republican and Democratic parties, as well as five members who are not affiliated with either major party — is charged with drawing voting district lines for the Michigan Senate and House of Representatives and U.S. Congress using the 2020 census data.

The Secretary of State administers the application and selection process of commissioners and will provide administrative support once the commission is up and running. All eligible Michigan voters are encouraged to apply to serve on the commission, “which does not require any special skills or expertise,” SOS officials said in a press release.

The Independent Citizens Redistricting Commission stems from voters approving a ballot initiative in November 2018 that amended the state constitution to allow citizens, rather than lawmakers to draw new voting district lines, said Bilal Hammoud, public engagement associate with the Secretary of State’s office.

A major aim of the constitutional amendment, he said, was to stop the practice of gerrymandering, which is “a process of cracking and packing district lines using automated algorithms” that can be used to “favor one political party” during elections.

“We know it (gerrymandering) affects policy, affects funding, roads, communities and the way that those communities are represented. District lines can also ensure that different voters are represented or shut out. Minority votes are diluted, revenue is impacted for community programs,” Hammoud said. “And the big one: after enough time, people who don’t get represented, people who don’t feel like their vote matters, they get disenfranchised, they stop wanting to participate in our great system.”

The randomly selected commission of citizens will each earn around $40,000 as compensation for their service, and also be able to hire consultants and experts to assist with the process. The application for the commission became available this fall, with thousands of random applications to also be mailed by the Secretary of State.

While the application only became available recently, the response so far has been overwhelmingly positive, Tapia said.

“We’ve had several thousands of applicants already in just a couple of weeks that we’ve had the application available,” she said. “So people are interested, I’m excited.”

The application deadline is June 1. The first random drawing to narrow the applicant pool down to 200 will be held July 1. Following this, up to five applicants can be removed by each of the Michigan Minority and Majority House and Senate Leaders for a maximum of 20 total by Aug. 1.

The final drawing of the 13-member commission will be done by Sept. 1, with the commission to be seated by Oct. 15.

Between next fall and fall 2021, the commission will meet, host town halls and draw maps, with the final maps adopted by the commission by Nov. 1. Maps will become law by Dec. 31, 2021, then take effect in the 2022 elections.

And for those who aren’t selected this time, Tapia said: “Remember, every 10 years, you’ll have the opportunity to apply to be a part of the commission. And we’re hoping that for those if you’re not selected, that you will still be able to participate by submitting maps of your communities and how your community should be represented.”

Those who couldn’t attend Thursday night’s workshop can still apply, Hammoud and Tapia emphasized. Applications are available online at redistrictingmichigan.org and can be returned by June 1, but must be notarized.

To find a free notary service near you, visit michigan.gov/freenotary.