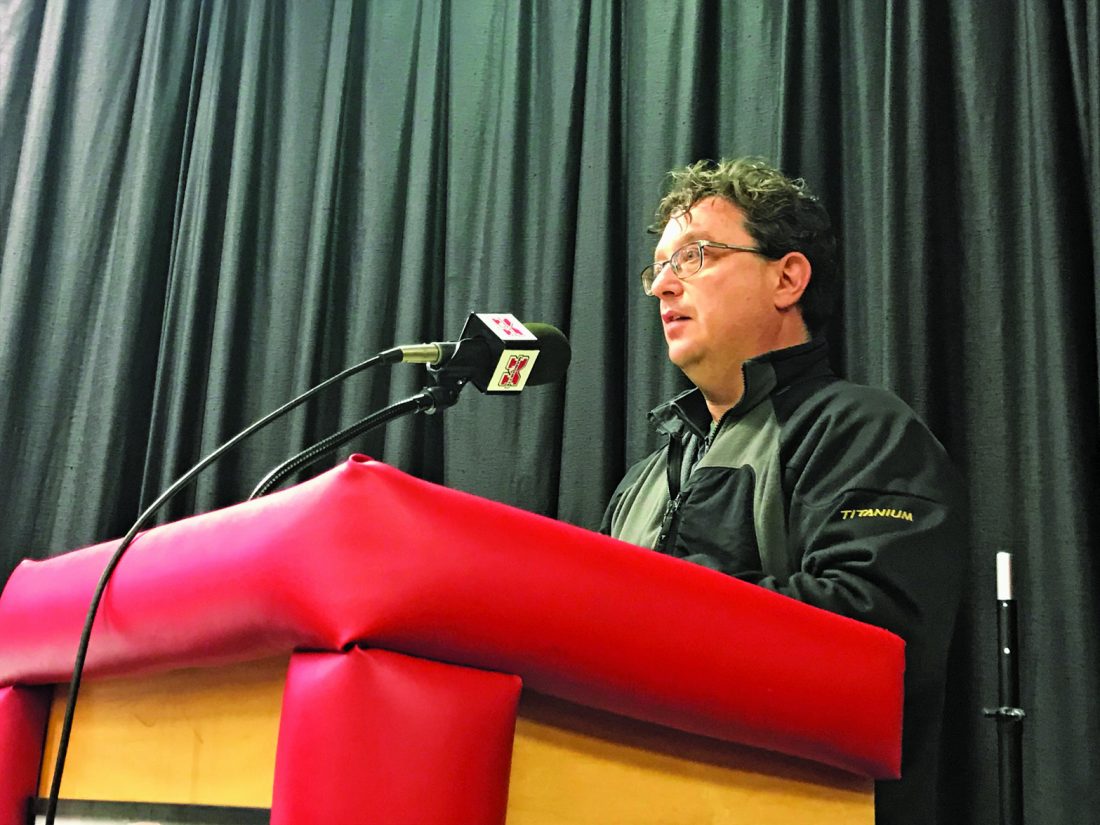 Joe Lubig, chairman of the Marquette Senior High School Nickname Research Committee, addresses the Marquette Area Board of Education on Monday. The committee has recommended the school district retire the nicknames “Redmen and “Redettes.” (Journal photo by Christie Bleck)

Committee Chairman Joe Lubig explained the committee’s consensus, based on evidence it had received for and against keeping the nicknames, at Monday’s MAPS Board of Education meeting at the MSHS Little Theater.

After reviewing materials and having “structured” discussion, the committee recommended discontinuing the nicknames, and suggested the MAPS school board use the time between now and its January meeting to review the report’s evidence, he said.

Lubig pointed out that many other organizations have come to the same conclusion as the committee’s consensus, and have adopted policies that disallow use of Native American symbols and nicknames by non-Native teams because of the misunderstanding and reinforcement of stereotypes promoted by the use of the symbols and imagery.

“The committee was influenced in its recommendation to discontinue the use of the current MSHS nicknames by the policies and curriculum already approved for formal votes of the board,” said Lubig, who noted those MAPS board actions include support of the district’s anti-bullying and anti-harassment policies.

He acknowledged the committee recognized the origins of the MSHS nickname was associated with the red, or crimson-red, sweater of a college alma mater of a former MAPS superintendent.

“However, somewhere along the line, the meaning of the nickname changed when the context changed and the nickname became associated with the image of a Native American,” Lubig said. “Our committee’s review of the research and our discussions reinforced that sports images, mascots, logos and nicknames are important symbols that have deep social connections.

“We were also reminded that since the gradual phaseout of the Native American image by the MAPS board and leadership over the last 10 years, a logo or mascot void has been created.”

Lubig said the current use of the block letter “M” in lieu of a mascot or logo has left academic and athletic teams without an appropriate symbol that could deepen social connections among students, the school and their community.

“With this in mind, the committee sees a hidden opportunity within the recommended change to a new mascot and nickname at Marquette Senior High School, the opportunity for the Marquette Area Public Schools to unify under one common nickname and mascot,” he said. “The research reviewed by the committee demonstrated that a change to a culturally appropriate and mascot common across all seven schools within the Marquette Area Public Schools might serve as a rallying point and a point of pride as MAPS continues to establish itself as the destination district.”

Lubig also noted that with the committee’s recommendation comes the opportunity to create an inclusive environment in the school district.

Most of the people who spoke during the public comment period on the issue indicated they favored no longer using the Redmen and Redettes nicknames.

One of those speakers was MSHS senior Roxy Sprowl.

“That is not maximizing my education.”

Keweenaw Bay Indian Community Tribal Council President Chris Swartz told the board he was pleased with its taking the initiative and moving forward.

He also spoke to the board on Oct. 21 when the issue came up, noting then that even if the nickname affected only one person, it should be removed.

The lone person to speak out in favor of keeping the nicknames was longtime resident Louis Taccolini.

“To me, what’s the problem?” Taccolini asked. “We’re turning everything into a big issue, and it’s a bunch of baloney. Things do not have to be perfect. They still can go on just the way they are.”

He said the Redmen and Redettes nicknames are part of tradition.

“It’s part of us,” Taccolini said. “If it offends somebody, it doesn’t offend just as many others, and so we’re leaning in the other direction to please everybody? No way. I can’t buy it.”

MAPS Board of Education President Rich Rossway said the board needs to absorb the committee’s report.

“We need to do our due diligence,” Rossway said, “and one thing I don’t want is to set an arbitrary date that we’re going to make a decision.”

He believes the board will know when it’s time to make that decision.

“I do know that as we go through this process, we’re going to do it in a meaningful and an informed way, a transparent way and a thoughtful way,” Rossway said.