Tales from the bcrypt 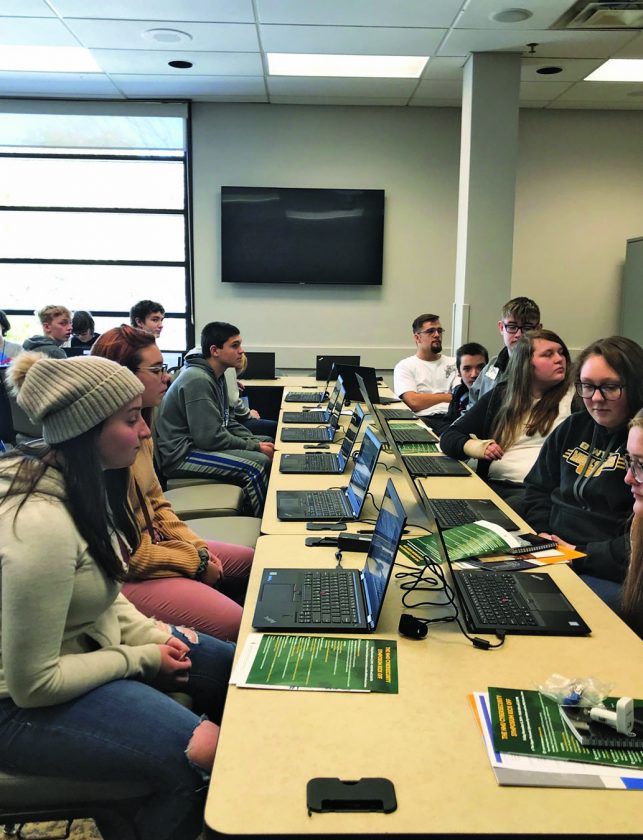 Upper Peninsula students attend the Cybersecurity Symposium on Friday at Northern Michigan University. They participated in activities that educated them in the up-and-coming field. (Journal photo by Christie Bleck)

That was one of the many lessons taught to high schoolers from across the Upper Peninsula at Friday’s Cyber-security Symposium at the Northern Center at Northern Michigan University.

Bryan DeAugustine, superintendent at NICE Community Schools, said the event was based on the Cybersecurity Talent Consortium.

“The kids are involved in hands-on activities where they’re working on web hacking, lock picking and capture-the-flag activities, so they’re actually getting their hands dirty,” DeAugustine said.

The students also got a chance to ethically attack systems and defend them on the Cyber Range Hub at NMU, and see what it’s like to work in the world of cybersecurity, DeAugustine said.

Ten districts with about 130 students and 15 teachers, who were writing their curricula and aligning their cybersecurity lessons, were represented, said DeAugustine, who noted industry professionals worked with the students to show them how their professions operate on a day-by-day basis.

Keith Glendon, worldwide business development and strategy leader for IBM Security Expert Labs, said his role at the event was to champion cybersecurity education in the area for schools, support health care from a cybersecurity standpoint and help spread awareness of the field as an opportunity for employment and economic development in the U.P.

He believes understanding how to think critically about problems and comprehending how technology works are the types of skills that will help kids succeed in the world, even if they don’t enter the cybersecurity field.

“Every kid has a phone in their pocket,” Glendon said. “Very few know how it actually works, and the underlying infrastructure of the internet and what that does in terms of opening themselves to risks in the world from a privacy standpoint and a security standpoint.”

Luke Mariuzza, a junior at Westwood, took part in Friday’s event that he said focused on things such as preventing hackers from getting passwords from profiles on the internet.

“It’s a little advanced for me,” Mariuzza said. “I’m not that experienced, but it’s understandable.”

He is, however, taking a programming class at Westwood.

“I never really thought it’d be a career path for me, but after doing this for a little bit, I felt like it’s very interesting,” Mariuzza said.

Cybersecurity already is part of the high school curriculum.

Brian Sarvello, director of the Marquette-Alger Technical Middle College, which fielded a team named the Marquette/Alger Middle College CyberUPstars, said the members didn’t make it into the top three but had a wonderful experience.

“With only two months of cybersecurity experience, making it into the top 10 out of the 217 teams that began the challenge was quite a feat in itself,” Sarvello said in an email.