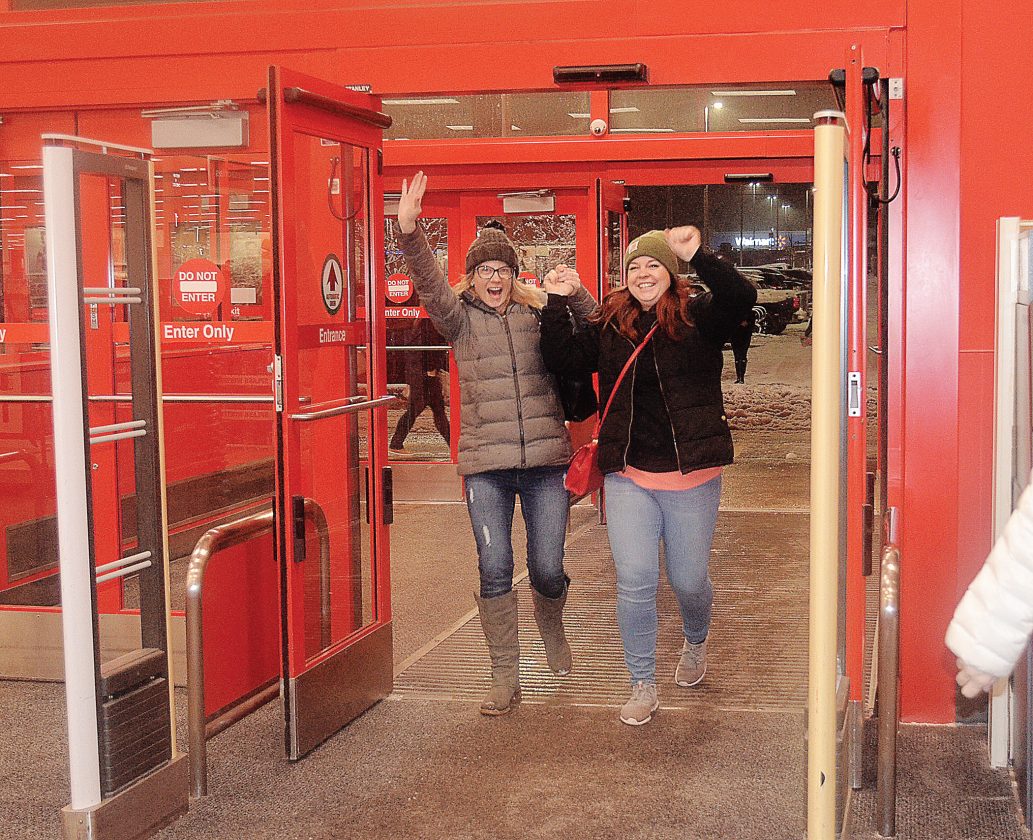 Sisters Jessica Thibeault, left, and Meggan Branstrom arrive at Target in Marquette Thursday night, the second stop on their all-night/all-day shopping on Black Friday Eve and Black Friday. They said they usually complete almost all of their Christmas shopping in this one fun, crazy trip to the stores. (Journal photo by Renee Prusi)

MARQUETTE — Jessica Thibeault and Meggan Branstrom are like generals preparing for battle on Thanksgiving Day.

They are definitely not rookies when it comes to shopping on what some call Black Friday Eve. The sisters, who are Rock natives, call it Dark Thursday.

Branstrom comes up to Marquette from Perkins and Thibeault drives in from Ishpeming. Both are rarin’ to go find bargains as the Christmas shopping season begins.

“We’ve been doing this since high school, so for like 15 years,” Thibeault said as the sisters waited in line at Walmart for a certain item. That item shall remain unnamed since their kids might read this story. Both have three children who were at the top of their shopping lists.

“We have a lot of things we do when we go out for this. There are people we meet up with at a diner to have a meal when the night part of shopping is done,” Thibeault said.

That’s right, the night part. The pair hits the stores offering specials on Friday, too, so it’s sometimes afternoon before they are headed home.

The sisters give their kids magazines from stores and have them circle what they might like as gifts.

“We are so prepared for this,” Thibeault said. “We go online at least two weeks before to make sure we’re up on where the best deals are.”

In all these years of Black Friday shopping, have there been any disappointments?

“We’ve been pretty good at getting what we want,” Branstrom said. “You have to know how to divide and conquer and you have to be quick sometimes. Men hunt, we shop.”

After Walmart, the pair crossed U.S. 41 to go to Target.

“We have lists of all the places we’re going to hit and what we are looking for,” Thibeault said as she started to fill her cart at Target. “I get excited for this every year.”

The time they spend on Thanksgiving night and the day after pretty much completes the sisters’ Christmas shopping for the year.

“We might pick up a few more little things, but most of it will be done,” Thibeault said.

Like a number of Upper Peninsula residents after the big snow Wednesday, Branstrom was without power at her home when she headed out. A generator was running there, but she was happy to get away for this annual night/day of fun with her sister.

As they made their way toward the back of the store, the sisters ran into a number of friends they see every Black Friday.

After they’ve eaten, the sisters will follow another tradition. They will park in Menards parking lot, awaiting that store’s morning opening time. And to stay awake, they will buy a few DVDs and watch them while in the car.