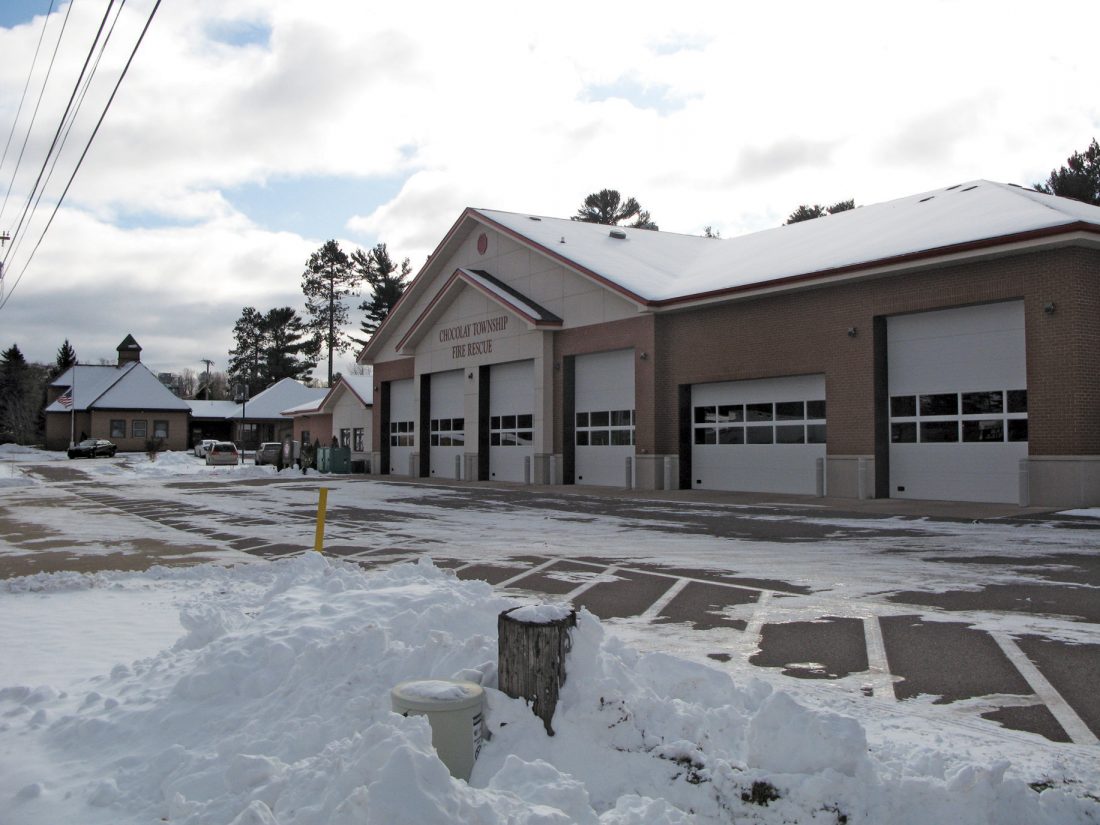 The Chocolay Township Fire Station on U.S. 41 is pictured. The Chocolay Township Board voted to approve a $6,500 per month lease of a nearby building to house its fire equipment after a snow event in February caused roof trusses on the fire station to fail. (Journal photo by Lisa Bowers)

MARQUETTE — As legal action surrounding structural issues with the Chocolay Township Fire Hall begins to surface, the township’s fire trucks will have a new temporary home beginning at the end of November.

The Chocolay Township Board on Monday unanimously approved entering into a lease agreement with Lee Blondeau for a structure at 5125 U.S. 41 South. The township will store its emergency vehicles there until repairs can be made to the its 12,000-square-foot fire hall after the roof trusses began to fail in February.

The $6,500 cost of the lease is expected to be covered by the township’s insurance, which is provided through Michigan Municipal Risk Management Authority, or MRMA, Township Supervisor Richard Bohjanen said during a phone interview Tuesday.

Bohjanen said the fire trucks will likely be moved to the nearby temporary facility by Dec. 1 so a Signal Construction crew can begin bracing and shoring the roof system.

“The reason for choosing the building across the street is it is adequate storage and the response of the fire department would be different by seconds, which is not a significant amount of time,” Bohjanen said.

The issue began around Feb. 24, Bohjanen said, after ice and snow from record precipitation had accumulated on the roof.

“The walls appeared to be bulging, (roof) trusses were twisted and appeared to be split,” Bohjanen said. “They had to use equipment, like a cherry picker, because it was that close to failure.

During Monday’s meeting, the board also went into closed session to discuss legal issues concerning the $2.1 million structure, which was built in 2013 using a 1.7-mill levy approved by voters in 2012.

MRMA filed suit in August in Marquette County’s 25th Circuit Court against Associated Constructors LLC, the company responsible for construction of the building; Wendrick’s Truss Inc., who manufactured the trusses for the structure; and Integrated Designs Inc., who provided architectural, engineering and design services for the project.

The suit is seeking damages “in excess of $25,000” and alleges that the building’s roof trusses were installed improperly, without “proper lateral bracing.”

“Due to the lack of appropriate roof truss bracing, as described, the Chocolay fire hall building suffered significant structural damage following this (Feb. 24 and 25) snowfall,” MRMA’s complaint states, “including but not limited to the bowing or deflection of a large number of roof trusses, bowing in the south gable end wall, and cracks in the ceiling drywall. Plans and estimates for building repairs are still being finalized but are anticipated to be significant in terms of both cost and time.”

Officials said the township would only be financially responsible for a $1,000 deductible, with other costs being paid for through insurance.

The building, the complaint alleges, “has been made substantially unusable. Due to the threat of roof collapse, the building was closed to public use, and even Chocolay employees have only limited access to the portions of the building which have been deemed temporarily safe to occupy during the summer months.”

A response filed with the court by Associated Constructors LLC in October, calls the incident that caused the damage to the fire hall an “act of God.”

“The structure, including the trusses supporting the roof, had a load capacity two times the design load capacity for the roof and the amount of snow that had fallen throughout the season, and in particular in February 2019, unforeseeably exceeded the design and implemented structural capacity for loads carried by the roofing system, including the trusses,” the response states.

The response further alleges “negligence” on the part of Chocolay Township in that it “failed to monitor, maintain and supervise conditions of loading by weather elements snow, rain, ice and wind from November 2018 through February 2019 and keep the roofing load capacity free of accumulation.”

Chocolay Township had not filed an answer in court as of press time. Repair of the fire hall structure is expected to take place in the spring.