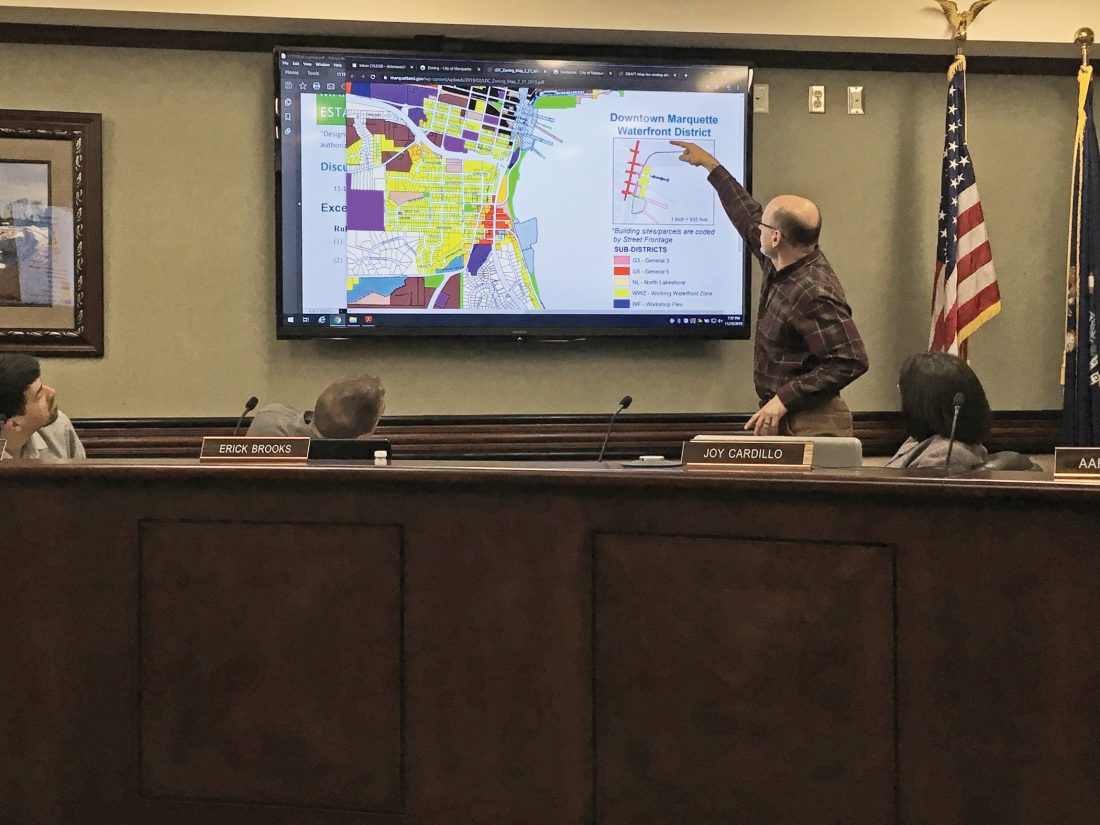 Seated from left, Marquette City Planning Commissioners Michael Larson, Erick Brooks and Chairwoman Joy Cardillo look on while Marquette City Planner and Zoning Administrator Dave Stensaas shows a map of zoning districts in the city. The planning commission held a work session Tuesday to discuss zoning for marijuana establishments and proposed amendments to the city’s land development code that would allow for the establishments in the city. (Journal photo by Cecilia Brown)

MARQUETTE — With an ordinance allowing the licensing of adult-use marijuana establishments in Marquette set to become effective in March, the Marquette City Planning Commission is working to amend the city’s land development code to accommodate the establishments.

The planning commission held a work session Tuesday on the topic, with a focus on proposing zoning recommendations for each type of marijuana business allowed under Michigan law and city regulations.

Under the ordinance approved Oct. 15 by the Marquette City Commission, there is no restriction on the number or types of licensed marijuana businesses to be allowed in the city. Marijuana businesses under the following license types can operate in the city: class A, B, C and excess growers; microbusinesses; consumption establishments; processors; retailers; safety compliance facilities; and secure transporters.

However, the ordinance does include “buffer zones” prohibiting the establishments from operating within 500 feet of schools, religious institutions or licensed substance abuse disorder program facilities.

The planning commission is proposing multiple allowable zoning districts for each business type but recommended that mixed-use districts and the Third Street Corridor should not allow most types of marijuana establishments, with the exception of safety processing facilities.

“I’d just go back to the reasoning I had last time for differentiating mixed-use and the Third Street Corridor from the others in that a lot of those were residential first and then were introducing commercial,” planning commission Chairwoman Joy Cardillo said. “And so I’m just much more inclined to be very cautious in those … I know they want to revisit this in a year, and we can put it back on the table then again.”

The commission suggested splitting marijuana processors — which are defined as a person licensed to obtain marijuana from marijuana establishments; process and package marijuana; and sell or transfer marijuana to the establishments — into two categories: processors that would use toxic, explosive, radioactive or flammable materials and those that would not.

Other processors could be allowed in areas zoned for industrial manufacturing, central business district, regional commercial, general commercial and most of the Marquette Downtown Waterfront District.

For a marijuana microbusiness — which is licensed to cultivate not more than 150 plants; package and process marijuana; sell or transfer marijuana to adults age 21 and over or a safety compliance facility, but not other marijuana establishments — the planning commission recommended mirroring the proposed zoning for processors by differentiating the zoning for microbusiness based on if they use potentially hazardous materials.

This means a microbusiness using a potentially hazardous material would need to be placed in an area zoned for industrial manufacturing, while other microbusinesses could be allowed in areas zoned for industrial manufacturing, central business district, regional commercial, general commercial and most of the Marquette Downtown Waterfront District.

For larger growing operations covered under class B and C licenses, as well as excess growers, industrial manufacturing, general commercial and regional commercial districts were recommended.

Marijuana safety compliance facilities — defined as a person licensed to test marijuana, including certification for potency and the presence of contaminants — were recommended to be permitted in all areas allowing lab use and medical offices, which are: industrial manufacturing, mixed-use, general commercial, regional commercial, and portions of the Third Street Corridor and the Marquette Downtown Waterfront District.

Regional commercial and industrial manufacturing districts were recommended for secure transporters, which are defined as entities licensed to obtain and transport marijuana to and from establishments.

The planning commission also discussed the zoning for consumption establishments — which are licensed commercial spaces where adults 21 and older are authorized to consume marijuana products — but cited some concerns about the process, as there is little precedent for zoning these businesses in the nation as a whole.

“This is new literally everywhere in the country,” Cardillo said.

The next planning commission work sessions on the matter will be held on Dec. 3 and Dec. 17, with a public hearing on proposed amendments to the land development code to be held Jan. 7.

Following that public hearing, the Marquette City Commission will announce and schedule its own public hearing and vote on the matter, city officials said.

For more information on the city’s marijuana ordinance, visit marquettemi.gov/marijuana. To learn more about the state law, visit michigan.gov/marijuana. 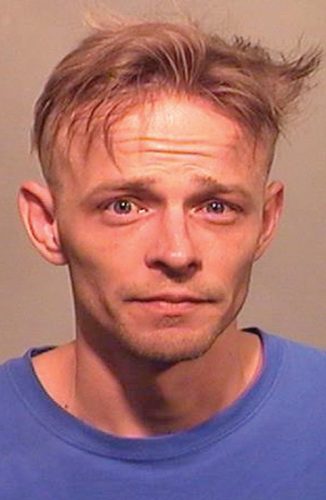 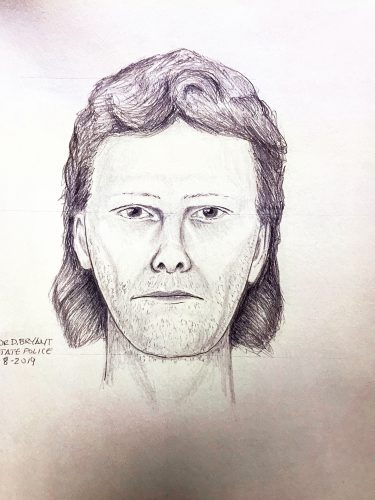