Lengthy budget impasse taking toll on some services in Michigan 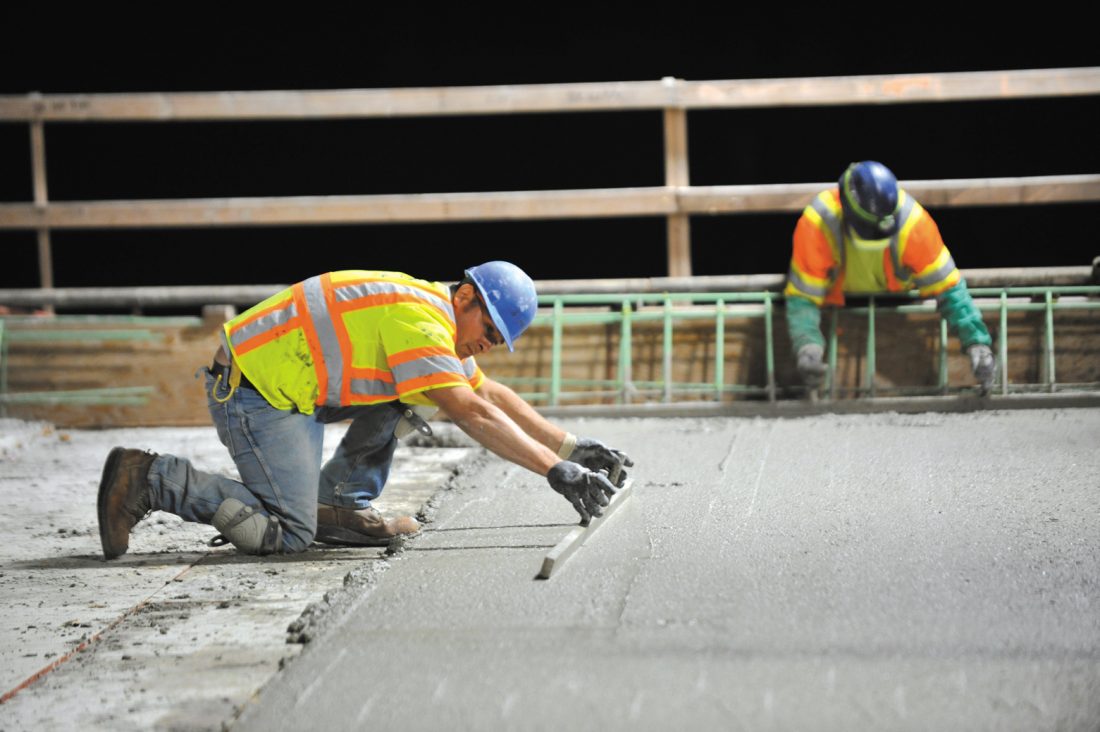 In this 2018 photo, road construction workers pour and spread wet concrete over rebar mesh on the I-75 Rouge River Bridge near Detroit. A budget impasse in Michigan is starting to take a toll on government programs and services. (AP photo)

LANSING — When $525,000 in state funding was cut from a popular school truancy program she runs to help students in the rural northeastern Lower Peninsula, Dorothy Pintar held off as long as possible on reducing staff.

But last week, nearly two months into a budget impasse in the Capitol, she drove to Oscoda County and laid off a school liaison who works to get at-risk students to class and turn around their academics.

It’s one of two layoffs that will take effect today, the day before Thanksgiving. Liaisons at six more schools will lose their jobs just before Christmas and right after New Year’s, unless Democratic Gov. Gretchen Whitmer and the Republican-led Legislature resolve their differences.

The School Success Partnership Program, which depends on the state for nearly 30% of its budget, is among many services starting to face repercussions after the first-year governor vetoed an unprecedented $947 million in funding on Sept. 30 to restart broken-down budget talks.

“I really think it’s a power game going on between the two sides,” Pintar said. “In the meantime, it’s really affecting not only programs and people but communities. The schools are a hub of a community. And once we lose programs like this in these rural areas, I don’t know when other services are going to be available.”

Sheriff’s offices, jails, charter schools, private colleges, hospitals, local governments and nonprofits also are casualties of the much-longer-than-expected standoff in Michigan — one of a handful of states, including Wisconsin, with a newly split government following the 2018 elections. Whitmer and lawmakers want to reverse the vetoes but are at odds over Republicans’ push to curtail her budget powers.

Way Academies operates two charter schools in Detroit, one in Flint and a cyberschool. They are among nearly 300 charters across Michigan that saw a $35 million, or 3%, funding increase nixed by Whitmer.

To keep classrooms from being impacted by the loss of almost $150,000, superintendent Madeline Black has scaled back security guards’ hours, had custodians clean four days a week instead of five and trimmed in-home visits to students who take classes online. Not having the $240 per-pupil increase, she said, makes it tougher to entice teachers to stay because pay increases or stipends are not available.

Sheriffs are starting to cut lose up to 119 deputies whose jobs are state-funded. Michigan Sheriffs’ Association Executive Director Blaine Koops said at least two sheriffs have let an officer go.

“The roads will not be as safe,” said Koops, referring to the deputies who enforce traffic laws, investigate crashes and serve as backup on 911 calls. “I don’t want to be a doomsayer, but injuries and fatalities will go up.”

In December, 67 small-town hospitals — half of all Michigan hospitals — will start confronting a $26 million funding cut at a time when rural hospitals have closed nationwide.

About 17,000 students at private colleges are in limbo, too, following the elimination of $38 million in need-based financial aid of up to $2,400 per student. Schools largely are letting affected students enroll for the next semester by listing the tuition grant as “pending” from the state.

The gridlock began in March, when Whitmer — who campaigned on fixing the roads — proposed a 45-cents-a-gallon fuel tax increase that went nowhere. By September, with the deadline to fund government nearing, she and GOP legislative leaders tabled road funding talks to focus on the budget. But negotiations quickly broke down, and the Legislature sent her a spending plan she deemed a “mess.”

Republicans expected line-item vetoes but were surprised at their magnitude: $630 million, or 1.8%, of state spending ($947 million including federal funds). She also used a board to unilaterally shift other funding around, angering GOP legislators who want to curb the power as part of a deal to undo the vetoes and transfers.

“Most of those differences can be resolved. I just can’t tell you when,” said Senate Majority Leader Mike Shirkey.

Whitmer said she’s eager to sign a bill that reverses vetoes but also adequately funds state departments that were shortchanged, noting “enormous potential consequences” in the prison system. Agency spokesman Chris Gautz warned that 75 staffers who help educate inmates will be laid off if the stalemate extends into next year.