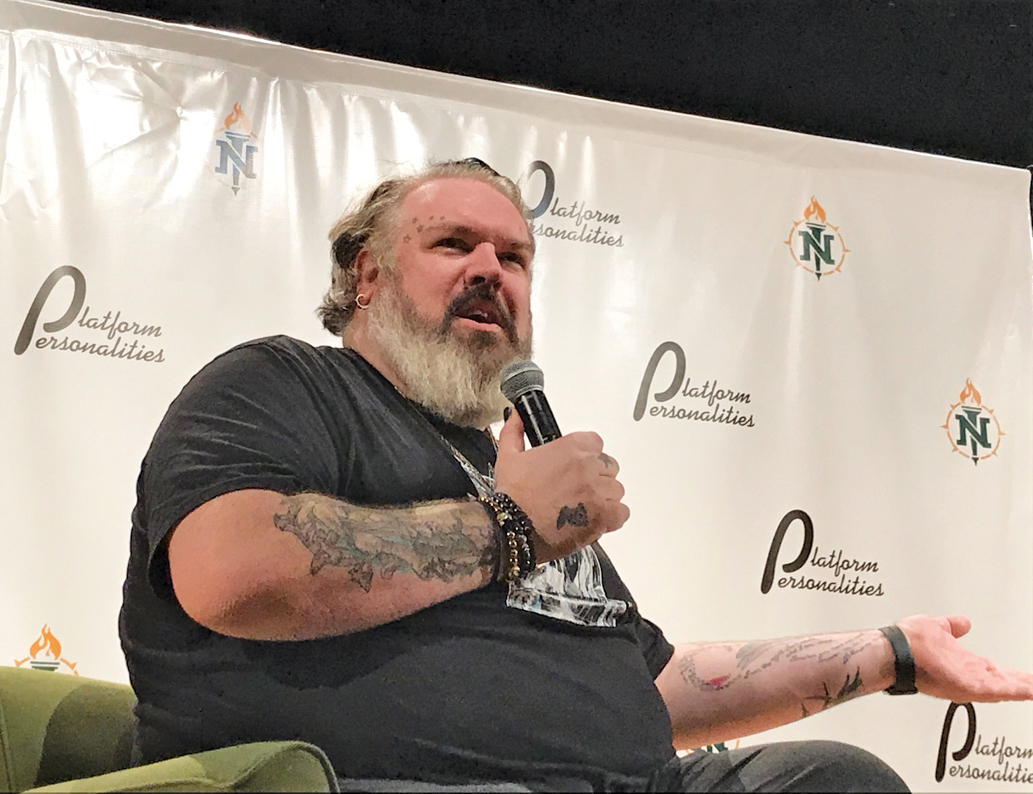 Kristian Nairn, who appeared on the HBO series “Game of Thrones,” speaks on Tuesday at Northern Michigan University’s Jamrich Hall. Nairn talked about his time on the series and other aspects of his career. (Journal photo by Christie Bleck)

MARQUETTE — Kristian Nairn had more words to say on Tuesday besides “Hodor” — the name of his “Game of Thrones” character who spoke only that word during his time on the well known HBO series.

Nairn, a native of Lisburn, Northern Ireland, who also is a disc jockey and guitarist, discussed his career at Northern Michigan University’s Jamrich Hall during a talk presented by the NMU student group Platform Personalities.

Nairn was born on a farm, but acknowledged he was “terrified of dirt” and hated drama. However, he was musical, working as a DJ for nearly 20 years before he began GOT.

Another career aspiration turned out to be fortuitous for him.

“I was going to be a sign language interpreter, which I think helped me with the role of Hodor, a non-verbal communication,” Nairn said.

An audition he almost turned down led to the role for which he is famous.

“Everything is different, everything is changed,” Nairn said, although he acknowledged he has to do his shopping in the middle of the night.

At about 7 feet tall, he wanted to make Hodor more than a big, dumb character, and having only one word throughout the series might have made that a challenge.

How did Nairn handle that challenge?

“It’s not about the word in the show for me,” he said. “It’s more about body language and a whole package, so the word really wasn’t that important for me, or how it was said. It was how you said it at the end of a scene with facial expressions.

“It did kind of spoil me, though. Now when I get all these wordy scripts and stuff, I realize I had it quite good for eight years.”

Moderator Chris Black, a member of the NMU golf team and the Student Leader Fellowship Program, also is a Lisburn native. He asked many questions that undoubtedly were on the minds of many people in the audience.

One of the first questions, of course, was about GOT.

“If you could change one thing about ‘Game of Thrones,’ what would it be?” Black asked.

Nairn had to dwell on that question for a few moments.

“I would like to bring myself back from the dead and see what happens,” Nairn said of Hodor, who dies in the series.

In GOT, that could have meant coming back as a wight, a reanimated corpse raised from death by the White Walkers.

Both wights and White Walkers spelled trouble for people who came upon them.

The scenario would have been OK by Nairn, drama-wise.

Nairn also expressed a view shared by many GOT fans — that the final season was rushed. He would have preferred three more episodes to flesh out the plot.

That also might have given him more bonding time with his colleagues.

Black asked Nairn if he had established strong connections with the other GOT actors.

“Because a lot of our stuff was filmed in a splinter group, we were always on our own,” Nairn said.

A member of that group was Isaac Hempstead Wright, who played Bran Stark — the eventual winner of the Iron Throne in the series. Nairn called him “pretty much like a little brother to me, still to this day,” although he’s not a kid anymore.

“He was literally strapped to me for six years,” Nairn said. “I couldn’t skip. Even in between the shots, he was very physically demonstrative. I was like a replacement nanny.”

As a gay actor, Nairn had some advice for NMU’s LGBTQ community.

Nairn finds it hard to pick a favorite passion — acting or being a DJ — although he gives the edge to the latter because of the live interaction.

“I like to be in front of a live audience,” Nairn said.

For students who want to follow either of those paths, he had these words: Refuse to give up.

“If it’s really in your heart, if it’s really something that drives you, you’ll find a way to do it,” Nairn said, “and don’t let anyone tell you otherwise.”