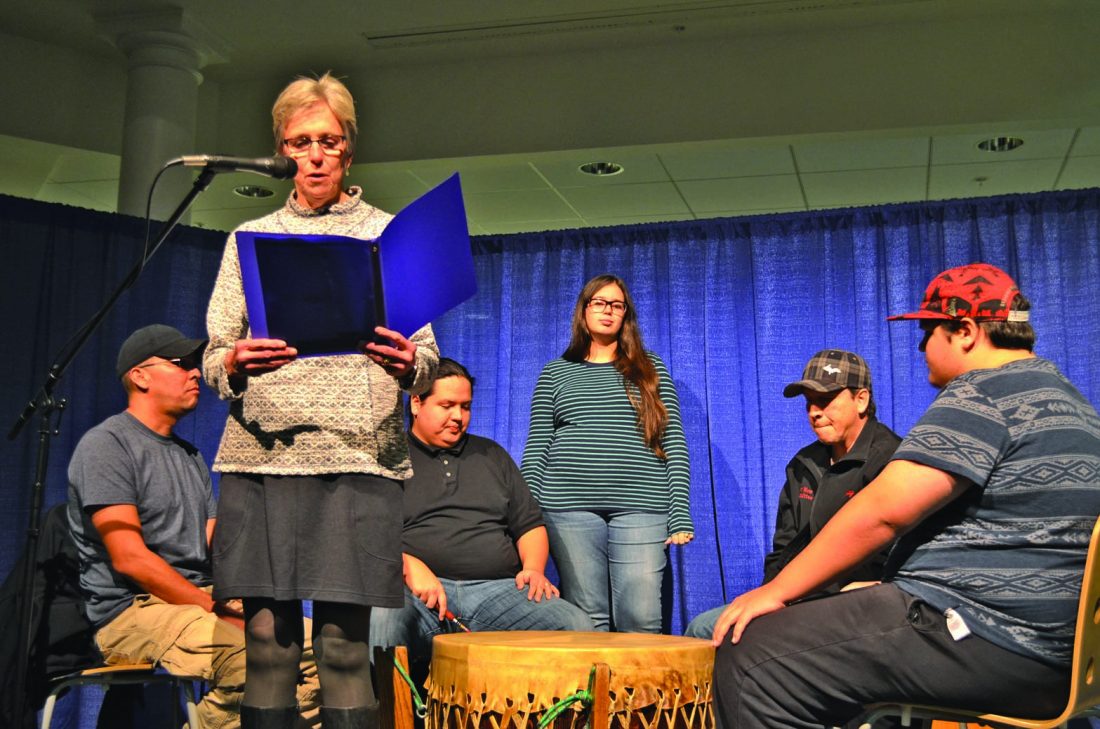 Maura Davenport, chairwoman of the Superior Watershed Partnership and Land Conservancy’s Board of Director’s, speaks at the 20th anniversary celebration held on Thursday, as the Woodland Singers of the Keweenaw Bay Indian Community, at back, prepare for the opening drumming circle. (Journal photo by Cecilia Brown)

Editor’s Note: This is the first of a two-part series on the Superior Watershed Partnership and Land Conservancy’s 20th Anniversary Celebration. Part one focuses on the organization’s history, as presented by Carl Lindquist, its executive director. Part two, to be published as next Monday’s Living Green article, will cover a keynote address delivered at the event by Dr. David Suzuki, a noted Canadian environmental scientist, author and climate activist.

Since it officially began 20 years ago, the Superior Watershed Partnership and Land Conservancy, or SWP, has touched all corners of the Upper Peninsula and the Lake Superior watershed through its extensive environmental work.

“Educating, restoring, adapting through real work, sound science and documented results” has led the organization to be involved with “a myriad of projects,” said Maura Davenport, chairwoman of the SWP’s Board of Directors.

Due to this, the community came together for the organization’s sold-out 20th Anniversary Celebration held Thursday at the Marquette Regional History Center.

The organization got its start all on the Chocolay River Watershed over two decades ago, SWP Executive Director Carl Lindquist said.

The group’s work on the Chocolay River Watershed would eventually expand to the entire the county with funding from Marquette County.

However, as time went on, the need to focus on the regional watershed and work beyond municipal boundaries became clear, leading the organization to become the Great Lakes nonprofit we now know it as, Lindquist said.

“It was 20 years ago that we became a Great Lakes nonprofit and went on the watershed solely,” he said. “That’s the approach we have to whatever we’re doing — environmental work, community work and so forth.”

The SWP began its work with informal crews doing hands-on environmental restoration work at various sites but it now hires over 20 college-age students annually to be part of its Great Lakes Conservation Corps, complete with uniforms, trucks and funding to traverse the entire Upper Peninsula, Lindquist said.

The crews get their hands dirty each and every summer season with activities such as restoring dunes, building trails, planting thousands of trees and more.

GLCC crews also came to the aid of residents in the Houghton and Hancock area for over a month after the “unprecedented rain and flooding” occurred during the storm of Father’s Day 2018, which devastated homes, roads and infrastructure, he said.

Beyond this work, the SWP has also been involved with many large-scale climate adaptation and restoration projects.

For example, the organization secured $2.5 million in funding for this summer’s planned relocation of a portion of Lakeshore Boulevard in Marquette, which will move the road inland and create around 25 acres of green space, Lindquist said.

It’s also extensively worked with the city of Marquette to address stormwater issues, which are the “single largest source of pollution to the Great Lakes,” he said.

While many may not head down to the beach when it’s raining, those who do might see dark-colored water and contaminants running off into the lake from storm drains, he said, noting that many may not realize that stormwater picks up pollutants from streets and parking lots and is not filtered before it reaches Lake Superior.

The SWP has addressed these stormwater issues in many ways, from placing red buckets around town to encourage proper cigarette butt disposal, to a project with the Lakeview Arena storm drain that helped decrease the bacteria count in the nearby waters of Lake Superior by around 70%, he said.

Another big stormwater project is currently underway along Hawley Street, he said, noting when the project is completed, stormwater will be routed into a restored wetland area, rather than directly to the lake.

Overall, the organization’s mission since its inception has been to do “the real work,” and the SWP looks forward to continuing the real work for many years to come, Lindquist said.

“Real environmental work, it not only benefits the Earth, but it benefits those who are doing the work and it benefits society as a whole … That’s what we’ve kind of patterned our organization on, just getting as much real work done as we can,” he said.

To learn more about the SWP, visit superiorwatersheds.org.