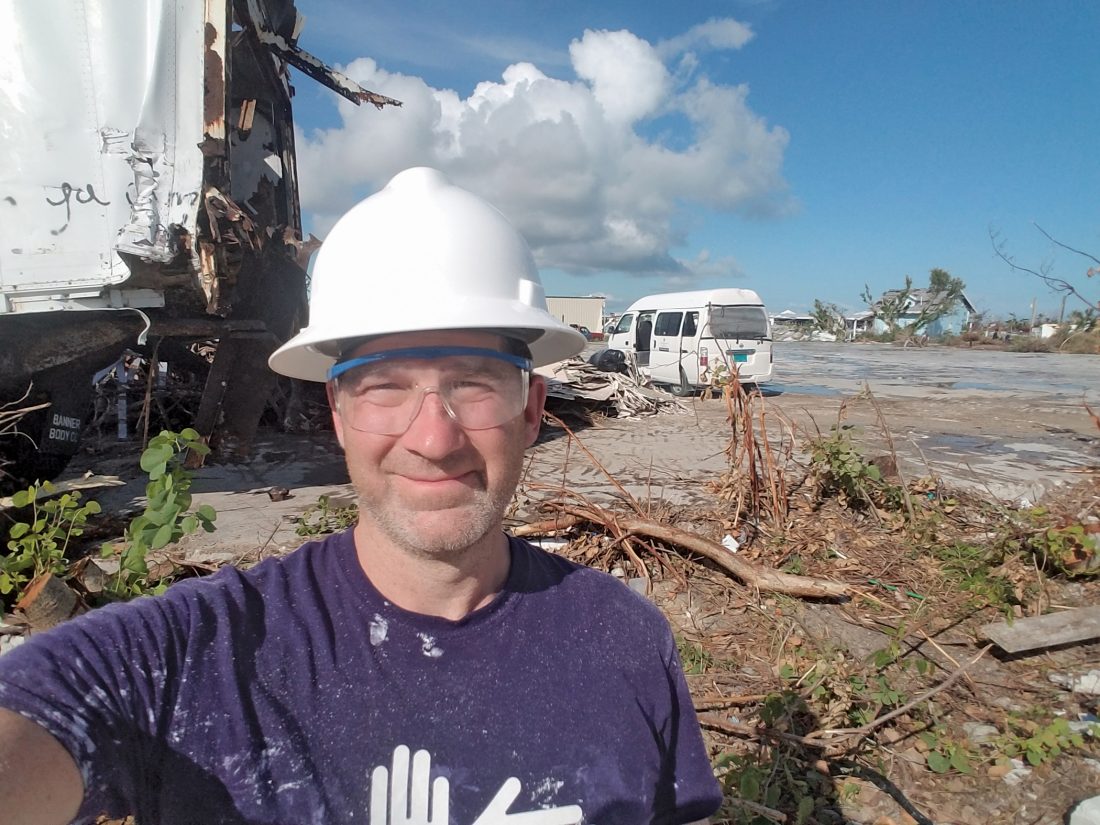 Brian Claus, co-owner of Synergy Fitness in Marquette, is surrounded by the devastation caused by Hurricane Dorian in the Bahamas. Claus was in the region for several weeks as part of the organization All Hands and Hearts. (Photo courtesy of Brian Claus)

MARQUETTE — It’s one thing for someone’s home to be destroyed following a natural disaster. But what happens when it’s an entire community? How do its residents begin to return to their former life, if that’s even possible?

Self-reliance and a community coming together play a part, of course, but help from the outside can make a major rebuilding effort much better.

All Hands and Hearts is an organization committed to addressing the immediate and long-term needs of communities impacted by natural disasters.

Brian Claus, co-owner of Synergy Fitness in Marquette, was part of the organization’s Smart Response Team that went to the Bahamas in the aftermath of Hurricane Dorian.

Rebuilding infrastructure played a major part in its efforts, but it had an artistic element as well — painting the big, broad-brush strokes on a huge mural in hard-hit Marsh Harbour with a commissioned artist making the finer details.

“It was just kind of a symbolism of coming back to life,” Claus said.

Claus arrived in the Bahamas on Oct. 29, and stayed for about two weeks.

All Hands and Hearts’ Disaster Assessment Response Team, though, arrived about a week after the hurricane to assess needs and meet with other organizations to see what needed to be done, he said.

After studying the organization online, he discovered it was a well-run operation.

So, Claus decided he wanted to be part of the effort, even though he had to pay for the trip out of his own pocket.

It also was an effort that attracted many people; out of 8,000 who applied to help, only 50 were selected, he said.

“They treat people really well,” Claus said. “It’s a really fun group of people. They’re young. All the people on base, all the staff members, were in their late 20s, early 30s — young, energetic, passionate about the cause. It was just a really good overall experience working with everybody there.”

The World Central Kitchen fed the entire island, Claus said, but his focus was construction and destruction.

That was a daunting task, considering “total devastation” greeted him upon his arrival.

Dorian then made another landfall on Grand Bahama. The ridge of high pressure steering Dorian westward collapsed on Sept. 2, causing Dorian to stall just north of Grand Bahama for about a day. NWS called it the strongest known tropical system to impact the Bahamas, causing catastrophic damage in the northwestern Bahamas.

The Weather Channel reported Dorian’s intense hurricane eye wall lashed the northwestern Bahamas for 51 straight hours since first beginning its siege on the Abacos Islands on the morning of Sept. 1.

Claus said reports indicated 90% of the structures in Marsh Harbour were destroyed.

“To me, everything looked demolished,” Claus said. “It’s kind of hard to fathom.”

Seeing the destruction on the news is one thing, but driving around and seeing it first-hand is another.

“You see every car window is smashed; every building, all the windows are smashed out of it, roofs are torn right off,” Claus said. “You see houses that were pulled right off their foundations, flipped upside down, and they’re 100 yards away from where they were originally at.”

Some sights were strange, to say the least. With the water having receded, Claus saw big boats that had been upended in the middle of a field.

Then there was the human element.

Claus said some residents traveled to other places like Florida to get away from Dorian, while others chose to ride it out.

“The descriptions of what was happening to their houses at the time was just mind-boggling,” he said.

Residents related stories of their walls appearing to suck in and then bulge out while another man told Claus that he and his family were huddled in their home when the roof shot off the building.

What should help the residents even more is people staying beyond the initial aftermath to continue the rebuilding.

“Our group is committed for a minimum of two years,” Claus said. “They figured that it’s going to take two years to build the infrastructure back in and get everybody back to school, and governmental buildings up and running and all these different things.”

He believes that realistically it will take five years to rebound.

“It’ll never be normal because buildings are designed differently now,” Claus said. “A lot of the older buildings really took a beating. A lot of the newer buildings with newer construction codes and things like that withheld a lot better.”

So, the team turned many of the former two-story buildings into one-story structures since the taller buildings’ second stories had been torn off.

Claus went on the trip to get away from what he called a lot of negativity that’s going on in the world.

But isn’t a hurricane negative? It depends on how you look at it.

“I wanted to be with a group of people that were focused, that were really good people wanting to do really good things,” Claus said, “and I was looking for that type of scenario along with just being able to help somebody that’s gone through something we probably never will.”

To him, it was interesting to see how a diverse group of people came together with a plan to affect so many people so quickly.

And there was a lot to do, he said, with tasks including removing nails and screws, sanitization, drywall and installing roofs.

“If you got a group of people that know what they’re doing, they’re focused, they have goals, they have people dedicated to the rebuilding of things like this, it’s unbelievable what people can accomplish in a short amount of time,” Claus said.

His group also is committed to the communities as well as the buildings.

For instance, it threw a Halloween party where 80 kids showed up.

“It was their first bit of normalcy after this horrendous thing happened,” Claus said.

Claus has set up a fundraising page at https://give.allhandsandhearts.org/profile/15684 as part of his effort to help people affected by Dorian.