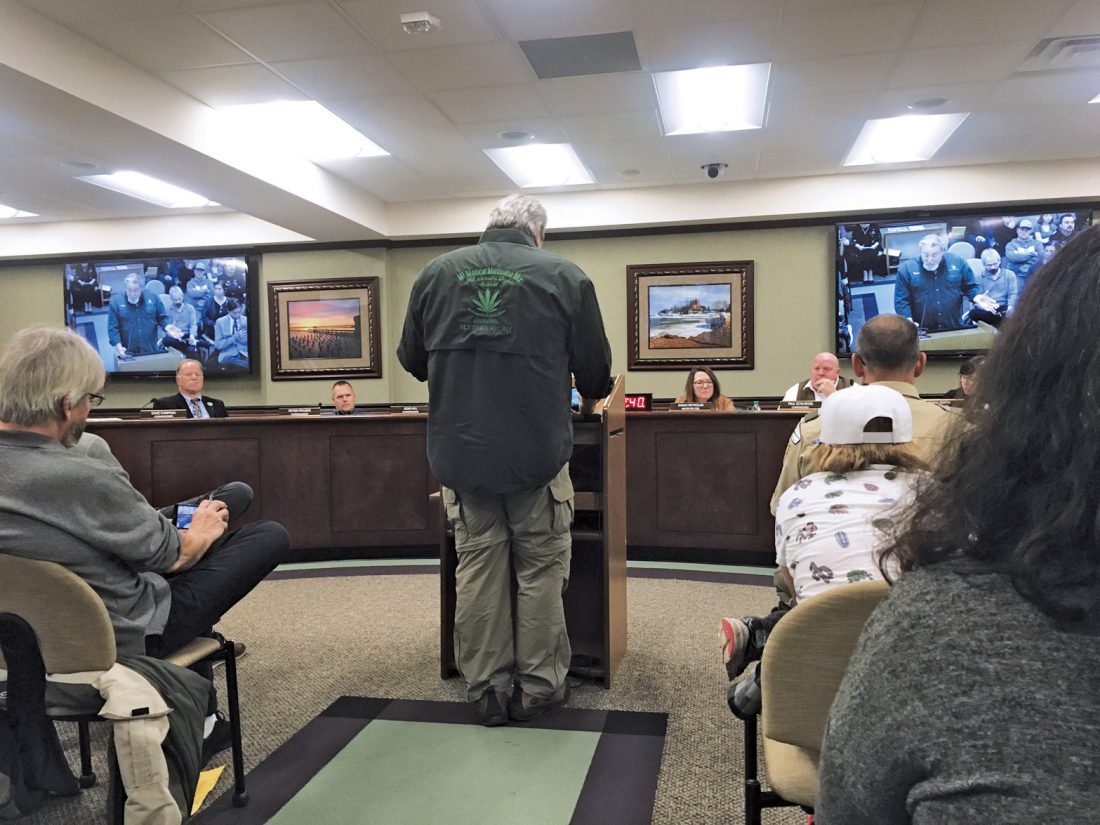 An area resident, center, speaks to the Marquette City Commission in support of an ordinance to allow adult-use marijuana businesses within the city of Marquette during a public hearing on the matter. Locals packed the commission chambers Tuesday night to express divided opinions on the ordinance. The commission voted 4-3 at Tuesday’s meeting to approve the ordinance allowing the establishments to operate within city limits, but not within 500 feet of schools, religious institutions or licensed substance abuse disorder program facilities. It will become effective March 1. (Journal photo by Cecilia Brown)

MARQUETTE — Adult-use recreational marijuana businesses will be able to open their doors in the city of Marquette a littler sooner than originally proposed.

Following a public hearing and much input from area residents, the Marquette City Commission voted 4-3 at its Tuesday meeting to approve an ordinance effective March 1 allowing the establishments to operate within city limits, but not within 500 feet of schools, religious institutions or licensed substance abuse disorder program facilities.

The motion to approve the ordinance with an effective date of March — rather than June as proposed in the draft ordinance — was made by Mayor Pro Tem Sarah Reynolds.

The full original motion made by Reynolds was to make the ordinance effective in March with a 500-foot buffer zone for schools only.

The amendment to the motion was approved 4-3. Stonehouse, Frazier and Campana dissented, as they were in favor of additional buffer zones.

Per the state’s emergency rules, the approved ordinance also prohibits the businesses from operating in areas that are exclusively zoned for residential use, city officials said.

Many area residents spoke during the public hearing prior to the vote, expressing divided opinions in regards to the ordinance.

Several commenters expressed concerns about the potential for substance abuse and the impacts of the establishments on youth, family and schools.

Others said they supported the ordinance due to the potential benefits of allowing adults to purchase the substance in a regulated manner, as well as revenue that could be gained from the city licensing fee for the facilities.

Commenters also expressed concerns about the proposed June effective date and that some proposed buffer zone scenarios would leave few areas where the businesses could actually operate in the city. One proposed buffer zone scenario would have prohibited the facilities from operating within 500 feet of schools, childcare centers, religious institutions, licensed substance abuse disorder programs, publicly owned parks or playgrounds, other marijuana establishments, and city recreation areas.

In light of these comments and other public input, Reynolds made her original motion to approve the ordinance with an effective date in March and a 500-foot buffer zone around schools only.

“I’m willing to take potential friendly amendment to it, however, I think this is what the public is asking for,” Reynolds said. “This is what I heard.”

Commissioners Jenn Hill and Jenna Smith said they agreed with this approach, as they also heard many area residents express support for the ordinance, as well as concerns about the June effective date and approving the full list of proposed buffer zones.

However, other commissioners expressed concerns about the buffer zone being for schools only.

“I believe we have to have marijuana facilities within the city,” Campana said. “The vote said we have to do it, it was a 62% vote (in favor of the Michigan Regulation and Taxation of Marihuana Act) but what I struggle with is the 38% that don’t want any marijuana in the city. That’s over a third of the voters in our city. These are the residents that voted for us. One-third of them don’t want it, that means they probably don’t want facilities within the city. I feel there’s nothing wrong with having a buffer zone — the intermediate one if you would look at the maps — the one that has schools, parks, childcare, churches and substance abuse centers.”

Commissioner Paul Schloegel shared these concerns, but said he would be open to the motion if it included buffer zones around religious institutions and licensed substance abuse facilities in addition to the school buffer zones.

Campana, Frazier and Stonehouse indicated they wouldn’t be in favor of a motion that didn’t include buffer zones around more types of facilities and establishments.

Stonehouse said enacting all proposed buffer zones would be a “balance to having a wide-open city in terms of the number of shops that are allowed in,” as the ordinance does not restrict the numbers or types of licenses for marijuana establishments in the city.

With Reynolds amending her original motion to include buffer zones for religious institutions and schools, Smith said the situation would be a “story of compromise,” noting that while she would prefer to see a schools-only buffer zone, she would support the amendment.

With the approval of the ordinance, city staff will now need to draft license applications, develop the application review process, establish fees for licensing, review enforcement policies and amend the city’s Land Development Code to provide a regulatory structure for the licensing of the facilities.

The approved ordinance outlines the types of establishments allowed; permissible locations; buffer zones; application and licensing processes for establishments; minimal operating standards for each type of establishment, including allowable hours of operation and odor control; police power to inspect and audit facilities; the process for license revocation; and penalties for noncompliance with the ordinance and more.

The commission also unanimously voted to approve a separate motion made by Reynolds to review the ordinance in March 2021.

To learn more about the ordinance, visit marquettemi.gov/marijuana.

Visit michigan.gov/marijuana for more information on the state’s emergency rules and the state licensing process. The state will begin accepting licensing applications Nov. 1 in a two-step process.