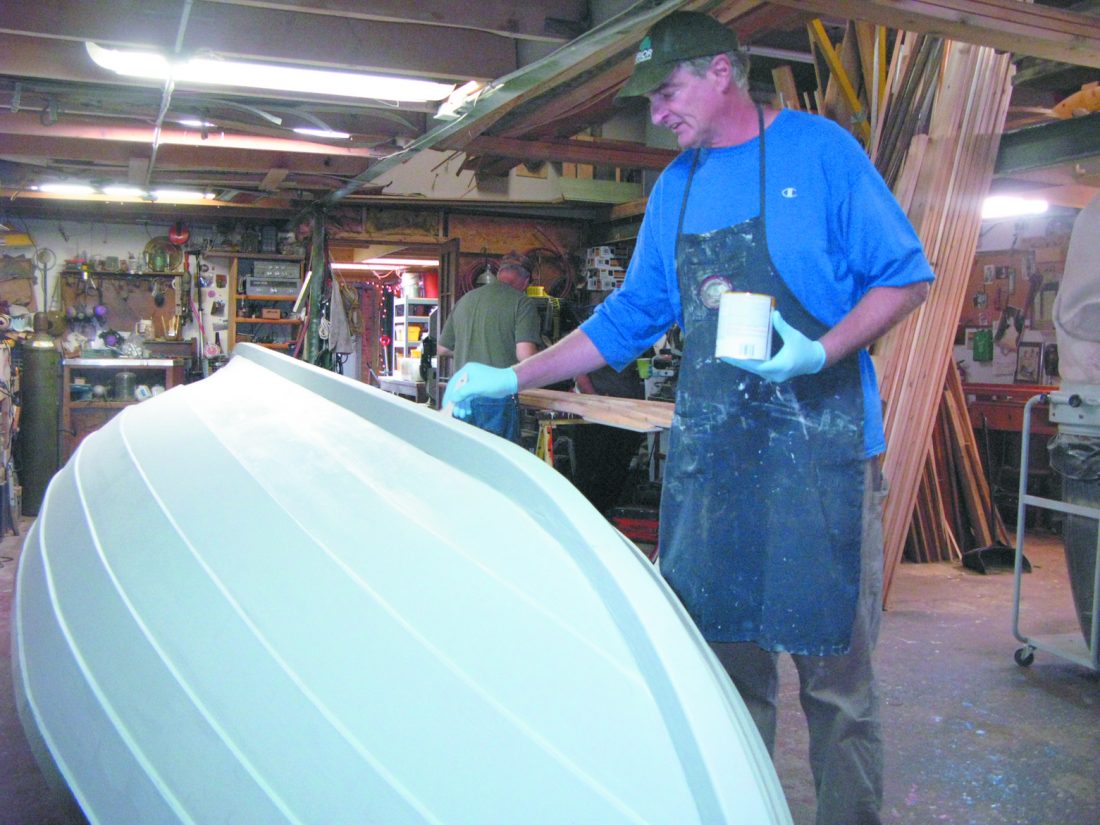 Marquette contractor Mike Potts works on a Scottish St. Ayles skiff, along with other local residents. The boat will be donated to the Superior Watershed Partnership. (Journal photo by Christie Bleck)

MARQUETTE — The Marquette area soon should have two brightly colored boats that can be seen along the Lake Superior shoreline.

A group of community boat builders, who don’t really have an official name, has been building a special boat at Tamarack Custom Builders, the shop of contractor Mike Potts, who was instrumental in constructing the bright orange-and-red Cornish pilot gig, the Lark, which the public uses for seasonal rows held once a week on Wednesdays.

Now there should be a bright yellow Scottish St. Ayles skiff cruising the waters.

Potts said building the skiff is typically difficult, but in a way, it isn’t for what he called a “group of amateurs.”

Either way, the boat is coming along nicely, or as Potts noted, “one board and one stick at a time.”

The builders’ skills were put to the test since work on the skiff began in October 2018.

“No one knew what they were doing, and we kind of felt our way through it,” Potts said.

The hull is made of marine-grade plywood, which Potts stressed is a strong and rot-resistant material.

However, Potts said the group can handle ownership of only one boat at a time, and the new skiff will go to the Superior Watershed Partnership.

“We’ve got that gig,” Potts said. “We’ve been using that for community rowing.”

Potts said the group obtained kits for two Scottish St. Ayles skiffs, which are four-oared rugged coastal boats. The project was made possible by the kit donations from Mark Hawkins, who runs Hands on Deck, a learning program in Green Bay, Wisconsin, that deals with Science, Technology, Engineering and Mathematics, or STEM, subjects.

The local project’s roots come from across the big pond.

Community boat building, Potts said, is encouraged in Scotland, so people cut kits for skiffs, and now the Marquette builders have two of them, one of which they gave to builders in Bayfield, Wisconsin.

It wouldn’t be a community project, though, if it involved just one person.

“These guys all came down just for fun on a Monday night,” said Potts, although it was a multi-gender effort.

The skiff’s colors can be considered fun as well.

Potts has started to paint the skiff “safety yellow” — a bright hue, not white to be confused with whitecaps. It will have a plaid stripe on the top, which is not exactly a common boat accent.

Another unusual boat accent that will be part of the skiff is a dragon that will act as a headpiece, with the tail acting as a rudder.

Jim Mager of Ishpeming is crafting the dragon and the tail.

He answered the call to volunteer with the project after learning people interested in woodworking and boats were needed.

Mager said he already liked working with wood and on boats.

It wasn’t a passing hobby.

In fact, Mager noted the dragon head had been used for a walking stick since he also crafts those items as well as canes.

“It was too big for a walking stick, so it just kind of sat around in my little shop,” Mager said.

Now if all goes to plan, the dragon will get to “see” parts of Lake Superior other former walking stick finials won’t.

On Monday, Mager put varnish on the dragon to improve its appearance even more.

The tail has a special purpose.

Potts said the skiff — which, judging from the work so far, could resemble a big yellow-and-plaid swimming dragon when finished — will be 22 feet long compared with the Lark’s 32-foot length.

Even though the skiff is smaller, it’s hardy, which is a good thing considering how rough Lake Superior waters can be.

“This is also an oceangoing boat for Lake Superior,” Potts said.

Potts expects the boat to be finished in a few weeks, and then given to the SWP.

Located on Presque Isle, the SWP is involved in many conservation projects that include Great Lakes habitat restoration, community pollution prevention, climate change adaptation planning and implementation, and others.

SWP should put the skiff to good use.

“SWP technical staff and the Great Lakes Conservation Corps will use the skiff for a variety of inventory and monitoring projects, including stormwater quality microplastics, invasive species, coastal erosion and climate adaptation projects,” SWP Executive Director Carl Lindquist said in an email. “We will also use the boat to train local residents and visitors interested in citizen science through the Lake Superior Volunteer Corps.”

Potts noted there could be more boats built in Marquette and other coastal communities if people are interested, with the kits and necessary information readily available.