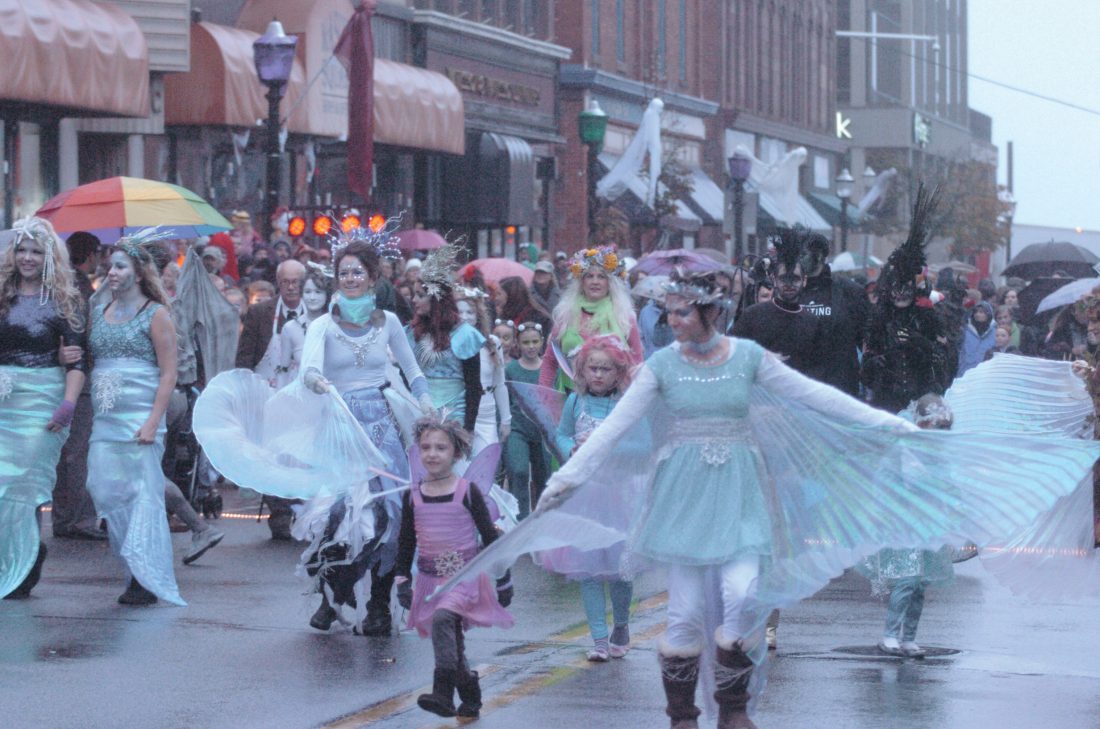 Parents and kids lead the opening exhibits during the 2017 Halloween Spectacle on Washington Street in Marquette. The event is returning this year as the Marquette Spectacle, with the theme of “Outré: An Alluring Dream.” The free, all-ages event will begin at 5 p.m. Saturday with a parade of performers and area residents down West Washington Street. The parade will lead to Harlow Park, where attendees can explore the World of Outré, which will feature art installations, pop-up performances and more. The finale will be held in the park at 7 p.m., followed by an after-party in the same location. (Journal file photo)

MARQUETTE — People of all ages are encouraged to “leave reality at the door” on Saturday evening and get involved with the immersive, dreamlike experience offered by the Marquette Spectacle and street parade in downtown Marquette, organizers said.

The free, family-friendly event, which this year has the theme of “Outré: An Alluring Dream,” will kick off with a parade on West Washington Street at 5 p.m., immediately followed by the opening of the World of Outré, at Harlow Park, with a finale at 7 p.m. and an after-party to follow at the same location, said Tiina Harris, arts and culture manager for the Marquette Community Services Department’s Arts and Culture Division.

The spectacle, a program presented by the city’s arts and culture division, is a creative way to showcase the community’s talents in an inclusive, accessible setting, Harris said.

This year’s event and theme aim to tie together many aspects of previous spectacles, Marquette Spectacle Artistic Director Niikah Hatfield said, as it will feature a street parade, art installations, pop-up performances, food trucks, face painting, live music, a finale of “dance and fire” and much more by over 50 performers.

“Outré means strange and unusual,” Hatfield said. “So it still has that very imaginative, otherworldly aspect to it. And it’s playing out and celebrating all the different aspects of the spectacle over the years.”

Spectacle attendees will have the opportunity to do more than just spectate, as the event is “made by the community for the community,” Harris said, noting costumes and pageantry are highly encouraged.

Attendees can show off a Halloween costume, make use of unusual and fantastical clothing, or get creative and “become your wildest dreams,” organizers said.

But “even if you don’t know what to dress up in, and you’re intrigued, come just to check it out, just to be intrigued,” said Laith Crow, pyrotechnic director for the Marquette Spectacle.

It’s the first year the spectacle will feature a street parade, organizers said, as they found many people enjoyed the spectacle’s processions in the past.

All are encouraged to come out and participate in the parade, from families in costumes to individuals playing instruments, riding unicycles or even creating art while participating in the parade; to businesses and organizations looking to spread the word about their mission in a unique way, Harris said.

“People can come to watch the performers parade, but we really want the community to parade with us,” Harris said.

Those who wish to participate in the street parade should assemble at 4:30 p.m. at the Marquette Commons. The parade starts at 5 p.m. and will take place on West Washington Street from Third Street to Seventh Street.

Immediately following the parade, the strange, dreamlike world contained in Harlow Park will be open for visitors at 5:30 p.m.

As attendees arrive at Harlow Park following the parade, they will be able to explore nightmares, dreams and everything in between through art installations, performances and more, Hatfield said.

The spectacle will culminate at 7 p.m. with a finale of fire and dance, featuring Crow as “The Stranger” who has entered and explored the dream world.

An after-party in the area will directly follow the finale of the spectacle, organizers said.

Overall, Harris feels the Marquette Spectacle is a great expression of what the city’s community services department — which encompasses arts and culture, parks and recreation and senior services — provides, as it’s an artistic event that encourages the participation of all age groups and takes place in a city park.

“This is a celebration of our community,” Harris said. “It’s a great city event that I hope continues for decades.”

Attendees are encouraged to set up chairs and blankets on the hill directly above the 600 block of West Bluff Street, as the street will be used as a stage for the performances. There will be bench seating and wheelchair areas designated as well to ensure the event is accessible to all, organizers said.

The event is sponsored by the Marquette Downtown Development Authority, Sombrero Sound and Double Trouble DJs.

For those who wish to volunteer the day of the event, call the Marquette Arts and Culture Center at 906-228-0472 for more information.