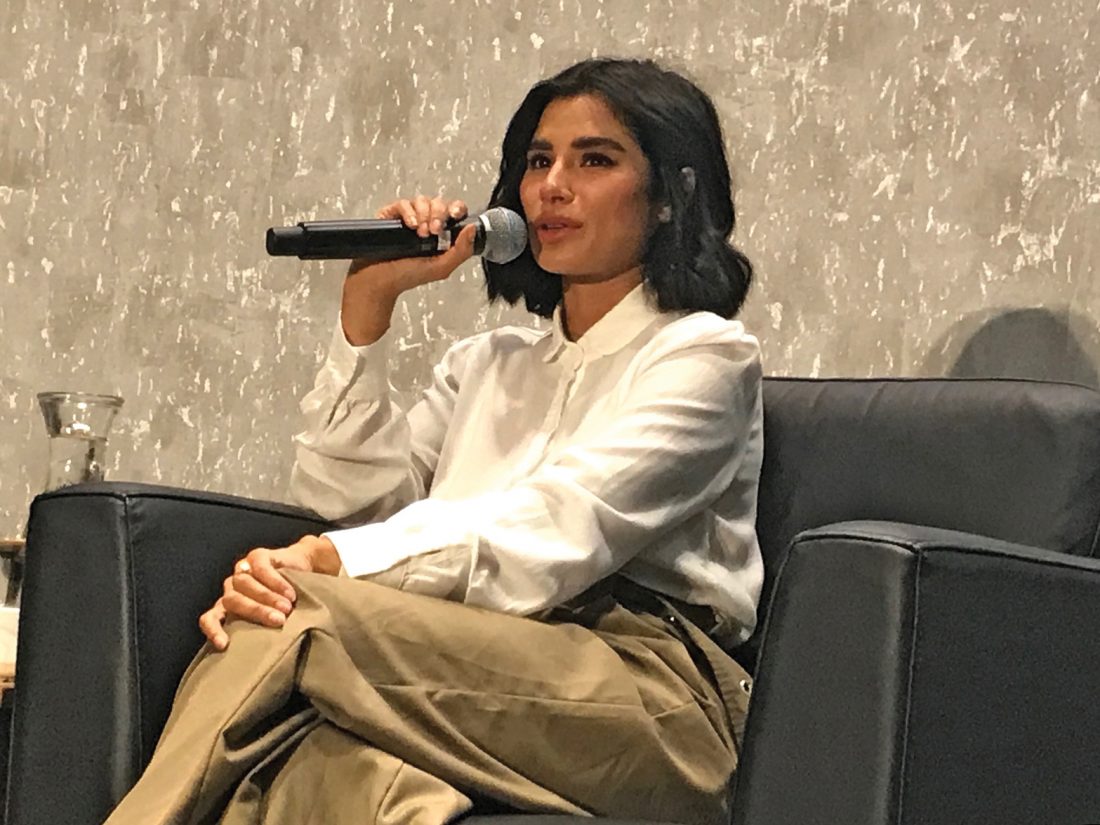 Actress Diane Guerrero discusses her experiences with immigration in the United States on Tuesday at the Northern Center on the Northern Michigan University campus. Guerrero is the author of “In the Country We Love: My Family Divided.” (Journal photo by Christie Bleck)

MARQUETTE — Actress Diane Guerrero’s life is more than just getting the next acting gig. It’s also about civic involvement and citizenship.

Guerrero, who has appeared in television shows “Orange is the New Black” and “Jane the Virgin,” spoke at the Northern Center at Northern Michigan University on Tuesday about her life and activism in the wake of the deportation of her parents, who were undocumented Colombian immigrants, when she was 14.

Although she was born in the United States, Guerrero stayed in the country and continued her education, with family friends taking her in and helping her build a life and career without family support.

And not only has she achieved acting success, Guerrero has written a memoir, “In the Country We Love: My Family Divided,” and was named an Ambassador for Citizenship and Naturalization by the White House. She also volunteers with the nonprofit Immigrant Legal Resource Center as well as Mi Familia Vota, an organization that promotes civic involvement.

Her parents’ being taken away by immigration officials, obviously, has had an effect on her.

“I’d like to say that it hasn’t defined me,” Guerrero said. “It was a very difficult moment in my life. I was always really encouraged to follow my dreams as a kid, although it was always kind of hard figuring out how to do that when I was always sort of afraid of my parents being separated from me.

“And when it did happen, I just had to really act quickly and I had to decide what I wanted for myself.”

Attending a performing arts high school inspired her to use art as an outlet, so she took advantage of that scenario.

She acknowledged the trauma of being separated from her family, but her strength carried her.

“My dad told me, ‘You be strong through school. Fight for yourself, and forget about us,'” Guerrero said.

How could she forget about her family?

“I did try my best because of what happened and I didn’t want to let my parents down,” she said, “but on the other hand there was a lot of boiling inside me.”

In college, though, Guerrero said she experienced troubles — even to the point where she was close to taking her own life — but underwent therapy.

The therapist told her to find something that would make her happy.

That was the arts.

She pursued this path, and was cast in “Orange is the New Black” in New York.

Even though Guerrero was on the show, she still was trying to discover herself.

She decided to volunteer for the Immigrant Legal Resource Center after meeting a lawyer who worked for the organization.

“Our current president was sort of running his campaign on the demonization of my community,” Guerrero said.

“Something huge happened,” Guerrero said. “People were able to connect with my story. Some people didn’t like it. Some people had questions, but this was exactly what I wanted. I wanted to be a part of this conversation. I wanted to start something because we were in a very dangerous time, and I felt like the one way I could help myself and others would be to share, and so I did.”

Talking about her book still brings her to tears.

“Me wanting to share this story was because I was so afraid for everybody out there,” said Guerrero, who stressed that her outcome doesn’t happen for everybody.

“I think that we should come together and figure out a way for the system to work,” Guerrero said. “I don’t think caging children, separating families is the answer.”

“Given that you previously turned down offers to act out your personal experiences with immigration, what changed for that season?” Santa Maria asked.

“Orange” was special for Guerrero, she said, because it gave her a home and because of everything that was happening.

“The show was named so that we could talk about the criminal system,” she said. “I don’t want to call it the criminal justice system because I don’t find any justice in it.”

Santa Maria asked Guerrero what readers of her memoir, which Guerrero noted is being taken to the screen, will take away from reading it given the current political climate.

Guerrero hopes people see the real families caught up in the turmoil.

“It’s just an insight into the immigration system in this country,” Guerrero said. “It’s not very linear. It’s not black and white. There’s no path to citizenship. There’s no right way to do it.”