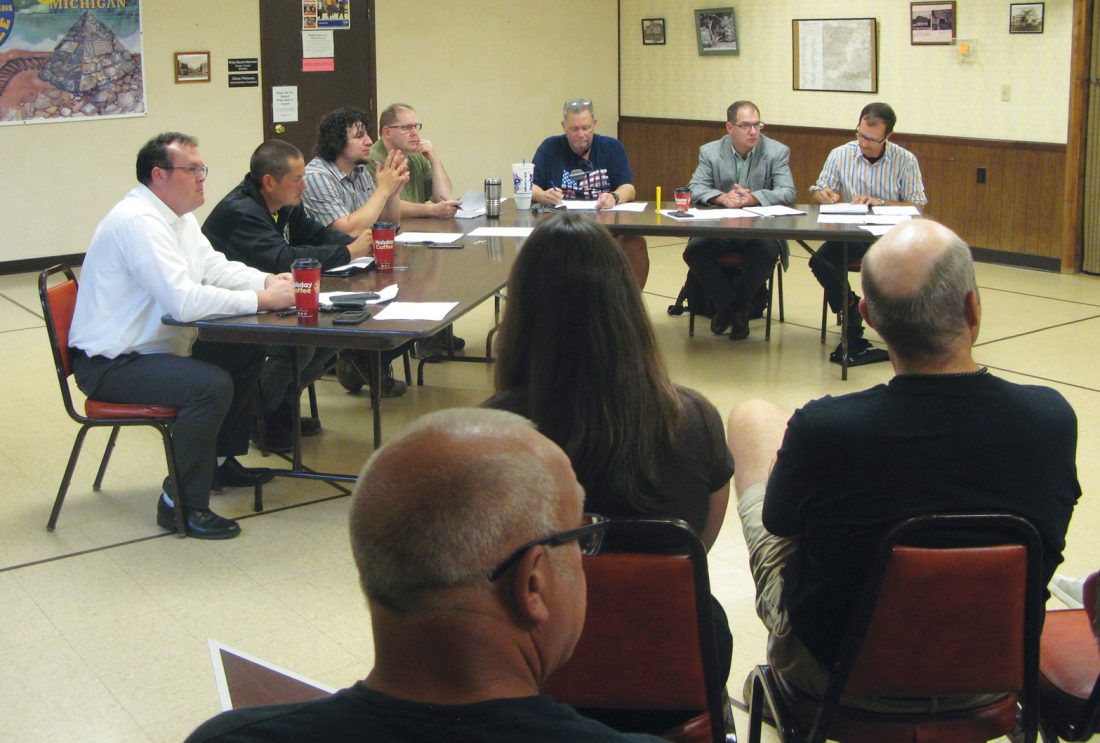 Negaunee Planning Commission members along with city staff hear resident concerns during a meeting on Tuesday. The commission held several public hearings including a proposed ordinance governing marijuana licenses, which is headed to the Negaunee City Council for consideration. (Journal photo by Lisa Bowers)

NEGAUNEE — The question of whether medical and recreational marijuana businesses will be allowed in Negaunee is headed to the Negaunee City Council.

The Negaunee Planning Commission on Tuesday approved the recommendation of an ordinance that would allow recreational and medical marijuana establishments only in industrial zones.

“Having it just be industrial, you are left with the Tracey Mine, the Kallioinen scrapyard, there’s parcels next to the wastewater treatment facility, and also the wastewater treatment facility, and also the city owns an industrial parcel across from the cemetery; that’s the only place a marijuana establishment could go as we have (worded it) — if the council adopts it,” Negaunee Planning and Zoning Administrator David Nelson said.

In addition to being limited to areas zoned industrial, he said any marijuana establishment would be required to be at least 250 feet away from any parcel zoned as a single-family residential area.

The proposed language also states no marijuana establishment “shall be licensed to operate within 1,000 feet of any school.”

If the city council approves the ordinance, applications for marijuana establishments will be accepted beginning Jan. 1, according to the proposed language.

Before registering to do business in the city, applicants would be required to obtain a special land use permit from the planning commission for any marijuana establishment.

Ordinance language also states the city would set up a selection process if multiple establishments apply for a permit to operate as a micro-business or provisioning center.

The proposed ordinance defines a micro-business as “a person licensed to cultivate not more than 150 marijuana plants; process and package marijuana; and sell or otherwise transfer marijuana to individuals who are 21 years of age or older to a marijuana safety compliance facility, but not other marijuana establishments.”

A provisioning center as defined by the 2016 Michigan Marijuana Legalization and Regulation Initiative is a “commercial entity located in the state that purchases marijuana from a grower or processor and sells, supplies or provides marijuana to registered qualifying patients directly or through their registered caregivers.”

Licenses for growers, transporters, processing facilities, and safety compliance facilities are not subject to the population limitation, the language states.